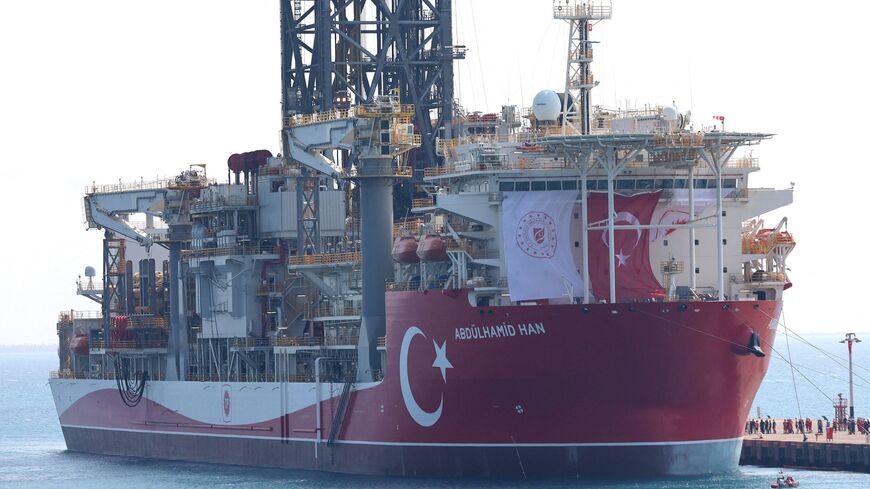 The Turkey-flagged Abdulhamid Han, an ultra-deepwater drillship owned and operated by the Turkish Petroleum Corporation, is anchored off the port of Tasucu prior to setting off to begin its hydrocarbon exploration in the Mediterranean Sea on Aug. 9, 2022. - ADEM ALTAN/AFP via Getty Images

The Abdulhamid Han will conduct a two-month mission in the eastern Mediterranean Sea. The ship is considered the strongest of the country’s fleet, the official Anadolu Agency reported.

The ship-tracking website MarineTraffic showed the Abdulhamid Han off the coast of Ayvacik, Turkey, between Turkey and Cyprus at about 9:00 pm local time.

Why it matters: Turkey sent a drilling ship to parts of the Mediterranean Sea claimed by Greece in 2018 and began conducting exploration in maritime territory claimed by Cyprus in 2019. Turkey halted the activities ahead of dialogue with Greece that began in early 2021.

Turkey's dialogue with Greece ended in May of this year, and now tensions are on the rise again. Leaders of both states exchanged subtle threats in June.

Turkey purchased the Abdulhamid Han, then known under a different name, from a South Korean company last year. It set sail for Turkey in March.

The tensions between Greece, Cyprus and Turkey have been followed by some of Turkey’s regional rivals growing closer to the southern European states. In June, Egyptian military leaders met with their Greek and Cypriot counterparts to discuss military cooperation. In May, the United Arab Emirates and Greece signed a $4.2 billion investment agreement. Last December, then-Israeli Prime Minister Naftali Bennett hosted Greek and Cypriot leaders for a meeting on their security alliance.

Know more: Turkey gets its energy from a variety of energy sources. In 2021, Turkey's use of coal and water for energy decreased, while renewable energy and gas increased.