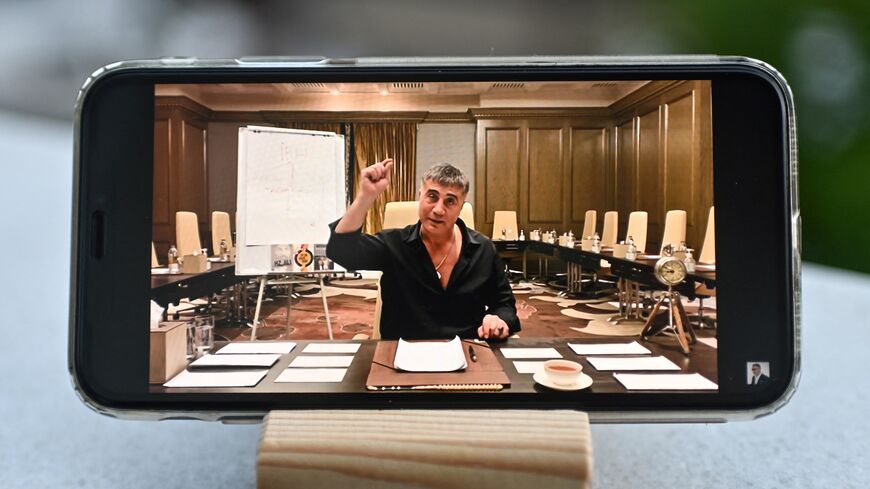 A photograph taken on May 26, 2021, in Istanbul shows on a mobile phone Sedat Peker speaking on his YouTube channel. - OZAN KOSE/AFP via Getty Images

ISTANBUL — One of Turkish President Recep Tayyip Erdogan’s economic advisers has quit following fresh corruption claims from an exiled crime boss who was once close to government circles.

Korkmaz Karaca, a member of the Presidential Economic Policy Board, announced his resignation on Tuesday evening, days after mafia leader Sedat Peker made a series of new allegations about bribery scams carried out by senior figures within the ruling Justice and Development Party (AKP).

Among those named among the bribery network were Karaca and fellow presidential adviser Serkan Taranoglu.

Karaca, who is in his mid-40s, resigned citing health problems aggravated by the allegations and said he had not taken “one penny” from the state in salary or expenses since starting his advisory role in October 2018.

He also quit as deputy president of the AKP’s local administrations and member of the party’s governing council.

The allegations led to calls for a parliamentary inquiry from the opposition.

In a formal proposal for an investigation by lawmakers, the left-wing People's Democratic Party (HDP) said Peker’s claims revealed a “process of political decay and corruption.”

The widespread nature of the allegations — encompassing leading business figures, a legislator, a journalist and government officials — demanded action at the highest level, according to the proposal signed by the HDP’s deputy parliamentary group leaders Meral Danis Bestas and Saruhan Oluc.

“The silence of the prosecutors also points to the fact that the crime of neglect of duty as regulated in the Turkish penal code is being committed,” they said. “The allegations are grave and must be investigated. Otherwise, it will cast a great shadow on the prestige of the parliament.”

Peker was once an ardent supporter of Erdogan’s rule and openly threatened the government’s opponents. Last year, however, the 51-year-old mobster began posting videos making a series of scandalous claims against political figures, including allegations of murder, rape, corruption and drug trafficking.

Although these allegations date to May last year, there has been no indication of any official investigation.

Opposition parties have also filed legal complaints in a bid to force an investigation by Turkish prosecutors, who many accuse of ignoring criminal allegations against AKP figures.

“We know that the judiciary is currently in the service of the government,” said Mustafa Yeneroglu from the Democracy and Progress Party. “However, we will file a criminal complaint … for the record. One day, there will be responsible prosecutors who will go after these disgraces.”

Kemal Kilicdaroglu, leader of the Republican People’s Party, said Peker’s status as a gangster who was previously close to ruling circles gave credibility to his claims. “All of Sedat Peker’s claims are true because he is one of the involved parties. He says, ‘We did it,’” Kilicdaroglu said in an interview on the Haberturk TV channel.

His new allegations were made in 50 tweets on Aug. 27, backed by purported screenshots of WhatsApp conversations that were part of an alleged scheme to extort 12 million Turkish liras ($660,000) from Mine Tozlu Sineren, the owner of Marka Investment Holding.

Peker alleged that members of the group sought bribes in the guise of “consultancy fees” to resolve a business problem for Sineren, who told broadcaster Halk TV that she had reported the approaches “every time” but never received a response.

Serhat Albayrak — the head of the pro-government Turkuvaz Media group and the brother of Erdogan’s son-in-law, former Finance Minister Berat Albayarak — coordinated the bribery scheme, according to Peker. Albayrak’s lawyer has denied the “completely untrue” allegations and threatened legal action. Other officials also denied the claims.

Also implicated in the alleged plot are a former head of the Capital Markets Board, Ali Fuat Taskesenliogu, and his sister, AKP lawmaker Zehra Taskesenlioglu.

Salih Orakci, a member of the Union of Chambers and Commodity Exchanges of Turkey who also advised former AKP Prime Minister Binali Yildirim, is said to have offered to help Sineren while asking to be appointed as company partner.

Newspaper columnist Burak Tasci, who writes for the pro-government Hurriyet, is also alleged to be involved in the conspiracy.

Late Wednesday the Istanbul Chief Public Prosecutor’s Office announced an investigation into a criminal complaint by the Capital Markets Board over the bribery claims.

“After a notice petition filed by the CMB regarding the allegations on a national TV channel, an investigation was started in order to reveal the material truth in all aspects,” the office said in a statement.