Egypt has announced initiatives aimed at addressing climate change, in the midst of its preparations to host the COP27, prioritizing the planting of 100 million trees and reducing the use of single-use plastic bags. 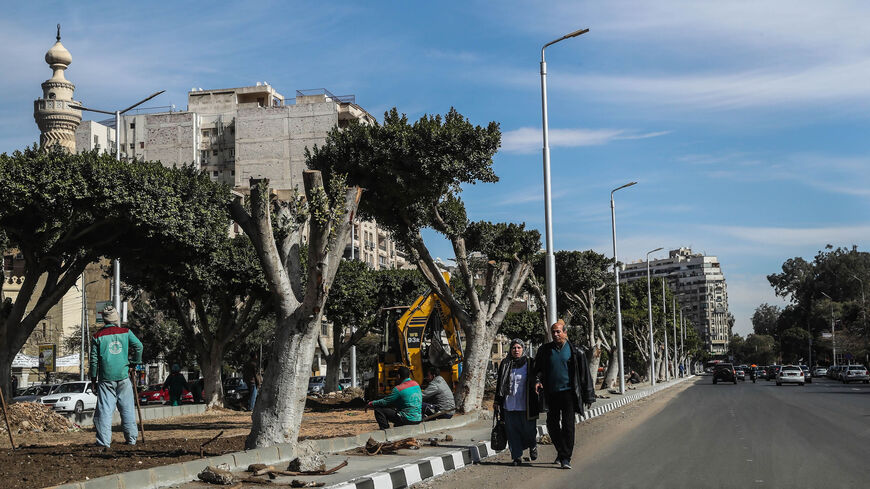 CAIRO — Egypt has recently announced a series of initiatives aimed at addressing climate change, in the midst of its preparations to host the 2022 United Nations Climate Change Conference (COP27) in Sharm el-Sheikh in November.

On Aug. 7, the Egyptian government announced an initiative to plant 100 million trees in every governorate.

During a Cabinet meeting Aug. 7, Prime Minister Mustafa Madbouly said, “The initiative begins with an extensive afforestation campaign on both sides of highways, as we aim to increase the green lung in Egyptian cities.”

On Aug. 10, Madbouly instructed governors to start implementing the initiative to plant 100 million trees on both sides of the main axes and streets that have been recently upgraded and developed, provided that each new road project includes planting the center island or the sides of the roads with the appropriate trees, in coordination with the officials of the Ministry of Agriculture in choosing the appropriate tree species.

He also ordered building a central park in major cities to “provide a green lung in large areas for citizens in these cities.”

Egyptian Minister of Environment Yasmine Fouad said during the meeting, “This initiative aims to double the per capita share of green spaces throughout Egypt, improve air quality, reduce greenhouse gases, improve the health of citizens and absorb pollutants and fumes.”

Fouad continued, “The economic return of this initiative is having fruitful trees such as olives or woody trees that can produce wood.”

The Egyptian government has not set a timetable for the end of the initiative to plant 100 million trees.

During the Cabinet meeting, Fouad and Madbouly also reviewed the details of the national strategy to reduce the use of single-use plastic bags.

He explained, “The government is going for more green investments in all sectors, such as the monorail project or the electric train, and is pumping more investments in the green hydrogen and water desalination sectors using renewable energy, all of which go in line with addressing climate change.”

Abaza pointed to the importance of the initiative to plant 100 million trees, as trees absorb carbon dioxide, which helps in improving the atmosphere, reducing harmful emissions and lowering temperatures, all of which are important in the framework of addressing climate change.

Samir Tantawi, director of the climate change project at the United Nations Development Program, told Al-Monitor, “This initiative helps reduce greenhouse gases, as trees worldwide absorb about 16 billion metric tons of carbon dioxide annually, and produce oxygen. They also give an aesthetic appearance to the area in which they are grown and help purify the air from lingering dust.”

He said, “It is important to choose the appropriate types of trees for this initiative, whether they are ornamental, fruit or woody trees. Trees cannot be randomly planted, according to a study on the needed quantities of water for planting these trees.”

Tantawi stressed, “The initiative to plant 100 million trees coincides with the government's preparations to host the COP27, and thus corresponds to the Egyptian tendency to promote the conference and show that Egypt contributes with civil society to reducing carbon emissions.”

Minister of Local Development Mahmoud Shaarawy said during the Aug. 7 Cabinet meeting, “There are 9,900 sites that have been identified throughout the governorates, with a total area of 6,600 acres that can serve as tree forests or gardens. Egypt's governorates and civil society institutions are cooperating to make this initiative a success.”

Hisham Issa, environmental expert and former head of the Central Administration for Climate Change at the Ministry of Environment, told Al-Monitor, “Single-use plastic bags cause great damage to the environment, whether they turn into waste on land or end up in the sea and harm marine wealth and aquatic life. They affect tourism, especially since many tourists come to Egypt's resorts to enjoy marine life.”

He noted, “Egypt is one of the countries most affected by climate change, especially with the recent rise in temperatures that we were not accustomed to, not to mention the extreme weather events and the heavy rainfall in winter. Egypt was not prepared for such negative effects on the climate.”

Abaza concluded, “Egyptian government institutions, the private sector and civil society are taking action to spread awareness about climate change and how to address it ahead of the COP27. This is very positive because the issue of climate change should be the primary concern at all levels.”