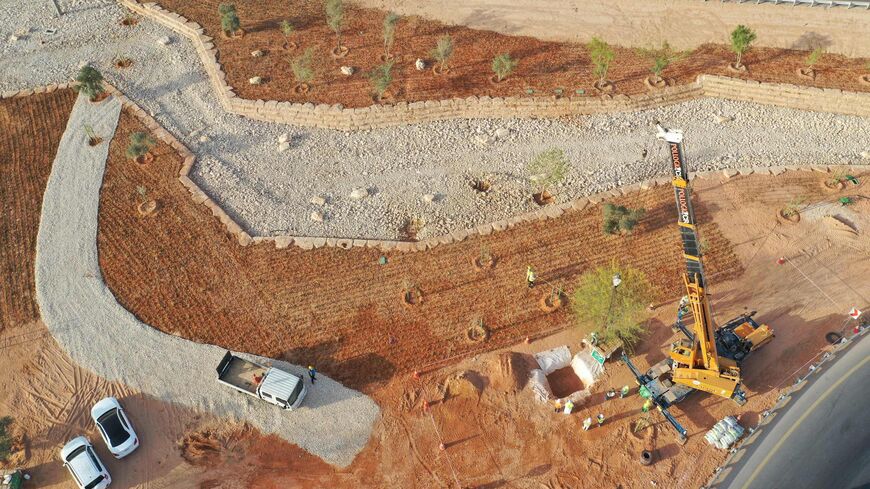 An aerial picture shows workers using a crane to plant trees in a park project by the roadside in the Saudi capital Riyadh, on March 29, 2021. - AFP via Getty Images

Egypt recently welcomed the Green Middle East initiative announced by Saudi Crown Prince Mohammed bin Salman that aims to bring together the countries of the Middle East to plant 40 billion trees in the region. Bin Salman claimed the effort will contribute to restoring 200 million hectares of land and reducing global carbon levels by about 2.5%.

The Egyptian Ministry of Environment issued a statement on March 29 praising the initiative as ambitious and indicative of Saudi Arabia's dedication to environmental preservation and international climate action. Egypt said it was looking forward to working with Saudi Arabia to implement this initiative and support environmental action in the Middle East.

On March 27, bin Salman announced that the Saudi Green Initiative and the Green Middle East initiative will lead the kingdom and the region in protecting the natural world and offer a clear plan to achieve global targets.

The Saudi Press Agency quoted bin Salman as saying, “As a leading global oil producer, the kingdom fully recognizes its share of responsibility in advancing the fight against the climate crisis. Just as the kingdom underpinned energy markets during the oil and gas era, it is going to become a global leader in forging a greener world.”

He added, “The kingdom and the region face significant climate challenges such as desertification, an immediate economic risk to the kingdom and the region ($13 billion is currently lost due to dust storms in the region every year). Air pollution from greenhouse gases also is estimated to have shortened average Saudi life expectancy by one and a half years. We will work through the Saudi Green Initiative to increase vegetation cover, reduce carbon emissions, combat pollution and land degradation and preserve marine life.”

Tamer Mustafa, the minister of environment’s office manager, told Al-Monitor the project will have substantial environmental benefits such as reducing atmospheric carbon levels and protecting natural lands including marine and coastal environments.

Mustafa said the Saudi Green Initiative will do a lot to reduce carbon emissions through renewable energy projects.

Mohammed Motamed, an assistant to the minister of environment, told Al-Monitor that the Ministry of Environment prioritizes restoring green spaces and creating new forested areas. He noted that the ministry has taken steps to plant forests and establish plant nurseries in some governorates as a source of trees and seedlings, in cooperation with the ministries of agriculture and housing.

Motamed added that the Ministry of Environment started afforestation work in the most polluted areas four years ago. He stressed that planting trees and increasing green areas has become a necessity in Egypt, explaining that the Ministry of Environment launched a project in November 2019 to plant one million trees and 2,700 feddans of gardens and green spaces nationwide, operating directly under Prime Minister Mostafa Madbouly and bringing together several ministries.

Motamed explained that Egypt has joined Saudi Arabia to increase green spaces and replace trees that are cut down in the course of urban development, stressing that green spaces are important for removing carbon dioxide and providing oxygen.

On Sept. 1, 2020, Egypt launched the Go Green initiative called for by Egyptian President Abdel Fattah al-Sisi, which aims to affect changes in citizen behavior, spread environmental awareness and urge citizens, especially the youth, to participate in preserving the environment and natural resources and ensuring their sustainability for future generations. The initiative also aims to raise awareness of taking care of natural resources according to global standards in a way that preserves the balance of ecosystems and maximizes opportunities for economic and social development.