Cairo is to help Kampala achieve food security in a bid to deal a blow to the Ugandan-Ethiopian alliance, especially in the Nile dam issue. 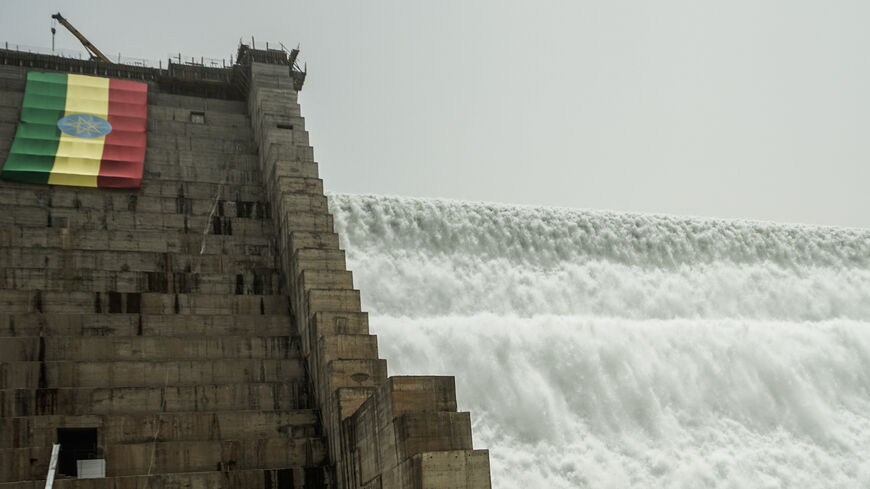 A general view of the Grand Ethiopian Renaissance Dam (GERD) in Guba, Ethiopia, on Feb. 20, 2022. - AMANUEL SILESHI/AFP via Getty Images

A Ugandan delegation on Aug. 24 visited the site of the Grand Ethiopian Renaissance Dam, the controversial dam that Ethiopia is building on the Blue Nile, a main tributary of the Nile River.

Meanwhile, during the annual Nile Basin Council of Ministers Meeting held in Tanzania on Aug. 19, Ethiopia and Uganda called on Nile Basin countries to join the Cooperative Framework Agreement (CFA), also known as the Entebbe Agreement.

According to a statement by the Ethiopian Foreign Ministry, “During the conference, Ethiopia and Uganda called on the Nile Basin countries that have yet to approve the CFA to join it in order for the Nile Basin Initiative to be upgraded to the Nile River Basin Commission.”

The statement added, “With the exception of Egypt, all participants in the Nile Basin Council of Ministers Meeting, which was held in Dar es Salaam, Tanzania, agreed to work together to this end.”

The Nile Basin Initiative was established in 2000 in Tanzania with the aim of consolidating cooperation between the Nile Basin countries. But in June 2010, Cairo froze its membership after six member countries signed the CFA in the Ugandan city of Entebbe, which gave the upstream countries the right to build dams on the Nile without making arrangements with the downstream countries.

Both Egypt and Sudan had rejected the agreement signed in 2010 and in 2016, Egypt returned to the Nile Basin Initiative.

Under the CFA, the member states would work toward establishing a more permanent Nile River Basin Commission to replace the Nile Basin Initiative.

Abbas Sharaki, professor of geology and water resources at Cairo University, told Al-Monitor, “Uganda and Ethiopia’s call to establish the Nile River Basin Commission is an attempt to mobilize the Nile Basin countries into a unified entity led by Addis Ababa.”

“Addis Ababa is trying to mobilize the Nile Basin countries, namely the upstream countries, to show the world that these countries are united in their positions against Egypt in the GERD crisis,” he added.

Egypt is working to break the alliance between those two countries through rapprochement with Uganda via cooperation on food security.

Egypt has worked for years to dismantle the Ugandan-Ethiopian alliance by winning over Kampala. Cairo concluded a military intelligence cooperation agreement with Kampala in 2021 to combat terrorism and other crimes.

Egyptian President Abdel Fattah al-Sisi visited Uganda in December 2016. During his visit, he announced his country’s readiness to carry out more joint projects in Uganda.

In May 2018, Ugandan President Yoweri Museveni visited Cairo, where he met with his Egyptian counterpart. The two countries signed several agreements, chief among them a contract between the Egyptian Ministry of Electricity and the Ugandan Ministry of Energy to establish a four-megawatt solar power plant in Uganda.

Egypt is also handling road and infrastructure projects in Uganda through the Arab Contractors construction company, including the construction of the Balisa Kamenkuli Road, the Masaka-Bukakata Road, and the Baleisa Kumi Road, as well as the rehabilitation and expansion of the Kayunga Hospital.

Egypt is also supporting Uganda in its efforts to develop its water resources through projects such as a flood-prevention project in the Kasese district of western Uganda and the construction of seven dams and the drilling of 75 wells in remote areas in Uganda.

During a meeting with Ugandan Defense Minister Vincent Bamulangaki Ssempijja on June 2, Ethiopia’s ambassador to Kampala, Alemtsehay Meseret, stressed her country’s interest in improving relations between the two countries.

Former Egyptian Minister of Irrigation Mohamed Nasr Allam told Al-Monitor, “Uganda's positions were historically supportive of Ethiopia, although Egypt is one of the countries that supported Uganda the most.”