The Egyptian government’s efforts to support its African neighbors have been ongoing as part of the promotion of relations with African countries, amid the ongoing crisis with Ethiopia over the Grand Ethiopian Renaissance Dam. 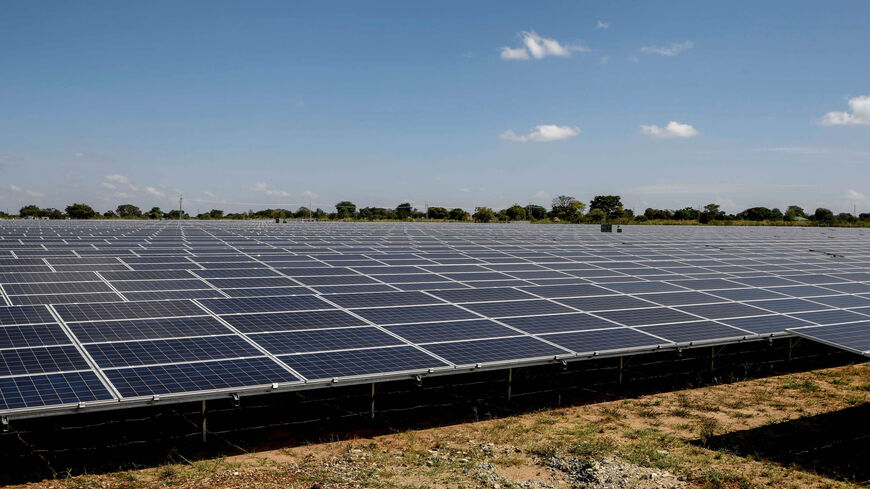 Solar panels are pictured during the inauguration of the Soroti power plant in Soroti district, about 186 miles northeast of the capital, Kampala, Uganda, Dec. 12, 2016. - Isaac Kasamani/AFP via Getty Images

CAIRO — Egypt has recently handed over a solar power plant to Uganda as part of cooperation efforts between the two countries.

During the celebrations on the occasion of Uganda’s Independence Day Jan. 25, Egyptian Ambassador to Uganda Ashraf Swailem handed over the Busia solar power station to the Ugandan side. The Egyptian project in Uganda is considered one of the most prominent achievements of the Ugandan government in 2021.

Swailem said during the ceremony that the four-megawatt (MW) project is an important addition to the Egyptian projects in Uganda, and will be connected to the national electricity grid so that other areas benefit from the energy generated by the station. The project is a continuation of the Egyptian development projects implemented in Uganda and the African continent, with the goal to advance development in vital fields, he added.

Uganda’s Minister of Energy and Mineral Resources Ruth Sentamu stressed in a tweet the importance of the energy sector in the country’s plans for a better future for the citizens and for boosting economic and social development.

Experts who spoke to Al-Monitor agree that Egypt’s efforts to develop relations with African countries and the provision of economic and social support is in Cairo's interest in light of the ongoing crisis with Ethiopia over the latter’s controversial dam on the Blue Nile.

She said, “The Egyptian support consists mainly of building dams and the transfer of Egyptian expertise via renewable energy projects or assistance in national projects.”

Media reports recently indicated that Addis Ababa has begun testing power generation from the GERD, at a time when Cairo called for resuming negotiations to reach a binding agreement.

Commenting on Uganda’s influence in the GERD crisis, Abdel Halim said, “Uganda, Kenya and Ethiopia are among the African countries that have major influence. Ugandan President Yoweri Museveni seeks to play a role in Africa and to find regional partners in order to bring about economic development in his country.”

In April 2021, Uganda announced that it signed with Egypt a military intelligence sharing agreement.

Attia Issawy, researcher on African affairs at Al-Ahram Center for Strategic Studies, told Al-Monitor, “The Egyptian support to Uganda would at least help Uganda take a neutral position in the crises in which Egypt is involved.”

Issawy, however, does not expect Uganda to strongly influence the GERD crisis due to the Ethiopian intransigence and rejection of foreign mediation, particularly since Uganda is a signatory to the Entebbe Agreement that seeks a redistribution of the Nile water shares. This is why, he said, Uganda will remain silent in order not to lose the Egyptian support.

Issawi noted, “The handover of a solar power plant to Uganda is part of the Egyptian contributions to the resolution of the electricity problem in Uganda,” pointing to other Egyptian projects in Uganda, such as digging wells and building dams.

Egypt's Minister of Irrigation and Water Resources Mohamed Abdel Aty revealed during a visit to Uganda in December 2021 that his country built seven dams in Uganda and dug 75 underground wells as part of Egypt's support to African countries in the water field.

Throughout the past years, the Egyptian government sought to support and assist African countries in several fields as part of its efforts to promote bilateral relations with these countries.

In December, Egyptian Minister of Housing, Utilities and Urban Communities Assem al-Jazzar made an inspection visit to Tanzania to follow up on the progress of work at the Julius Nyerere hydropower dam on the Rufiji River, which is being carried out by the joint venture of Egyptian companies, Arab Contractors and El Sewedy Electric Company, at a cost of $2.9 billion.

During his visit, Jazzar stressed that Egyptian President Abdel Fattah al-Sisi gives special attention to the Tanzanian dam project and its completion in the shortest possible time.

The minister further explained that the project will include the construction of a 1,025-meter-long (3,363-feet) dam, with a height of 134 meters (440 feet) and a storage capacity of 34 billion cubic meters of water. The hydroelectric power plant will generate electricity of 2,115 MW, he added.

Moreover, Cairo is also boosting cooperation in the transportation sector in Africa, and launched in October 2019 a new shipping line from the Ain Sokhna port to Kenya's Mombasa port as part of the Gosour project to boost trade with African countries.

In June 2021, Egyptian Transport Minister Kamel al-Wazir said in a speech at the forum of the heads of African investment promotion agencies, a railway project connecting Egypt and Sudan, “The environmental and technical studies of the project have already been completed, in preparation for the railway line connecting Egypt to eastern Sudan to serve the residential, agricultural and commercial communities.”

In the aviation sector, EgyptAir, the national carrier of Egypt, signed a memorandum of understanding with the government of Ghana on Oct. 21, 2020, to create a Ghanaian national aviation company with joint Egyptian-Ghanaian investment.

In June 2021, a memorandum was signed in Kigali, Rwanda, for the establishment of the Egypt-Rwanda Magdi Yacoub Heart Center, and the Egyptian Foreign Ministry launched in the same month an Egyptian project to combat malaria in South Sudan.

Speaking to Al-Monitor, Rami Zuhdi, former secretary of international relations at the Freedom Party and former head of the department of African affairs at the Nation's Future party, praised the promotion of Egyptian-African relations, saying, “These efforts would strengthen relations between Egypt and African countries at the popular and official levels. These countries have become well aware now that Egypt spares no effort to serve their interests.”