UN urges Turkey to return to women's rights accord

Special rapporteur Reem Alsalem has called on the Turkish government to reconsider last year’s decision to leave an UN agreement on combating abuse of women and girls. 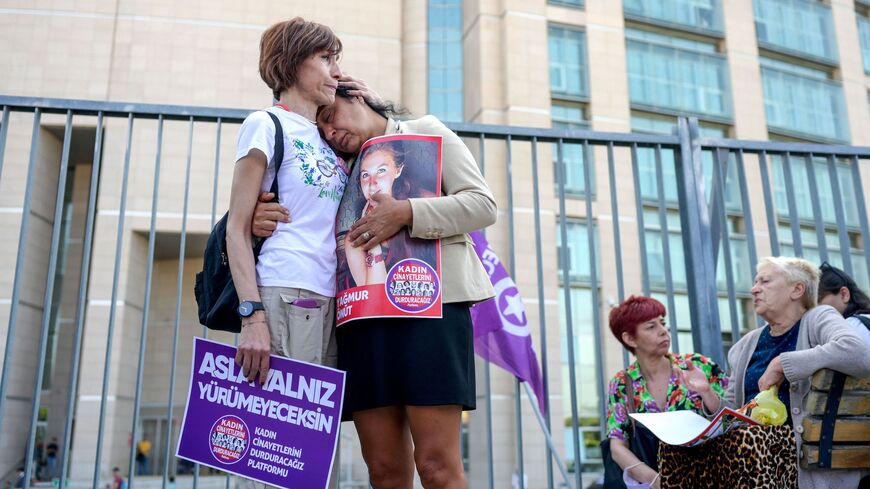 Relatives of victims of feminicide wait outside the Istanbul court ahead of a hearing to close a well-known anti-femicide group on June 1, 2022. - BULENT KILIC/AFP via Getty Images

ISTANBUL — The United Nations’ leading figure on violence against women has called on Turkey to re-join the Istanbul Convention following a 10-day visit to the country.

Turkey withdrew from the Istanbul Convention, a Council of Europe agreement to prevent and combat violence against women, with President Recep Tayyip Erdogan’s decree in March last year.

“I profoundly regret Turkey’s withdrawal from the Istanbul Convention,” said Reem Alsalem, the UN’s special rapporteur on violence against women and girls.

The decision — confirmed by Turkey’s highest administrative court, the Council of State, last week — “was made against a background of strong and sustained support for the convention, particularly by women’s rights groups in the country," she said. “In adopting this decision, the State Council does not appear to be in sync with the sentiments of the majority of Turkey’s citizens.”

Alsalem added, “Given the prevalence of violence against women and girls, I urge the government of Turkey to reconsider its decision to pull out of the convention and re-join the 37 countries that have ratified it in recognition of its value and comprehensiveness.”

Leaving the convention came as the rate of femicide was on the rise in Turkey and was widely protested by civil society groups.

Turkey was the first country to ratify the convention in 2012 but reversed the decision following pressure from conservative circles that claimed it undermined “Turkish values” centered on women’s roles as wives and mothers.

They also argued that it promoted non-heterosexual relationships and “immoral lifestyles.” One pro-government commentator referred to women defending the convention as “prostitutes” and said that “families are falling apart because of the Istanbul Convention.”

However, Alsalem said that those she had met during her trip “unequivocally recognize the value” of the convention in providing “significant impetus” to tackling violence against women and girls.

“In many ways, the bearing that the Istanbul Convention has had on the human rights framework of the country cannot be overstated,” she added at a news conference on her initial findings in Ankara on Wednesday.

Alsalem, an independent consultant who previously worked with several UN agencies, argued that the convention had not been properly explained to the public, allowing some groups to “deliberately misinterpret [its] objective and scope.”

Withdrawal from the convention had “not only hindered advancements but also created confusion as to the legality and continued applicability of key provisions” to protect women under Turkish laws.

By giving way to the demands of a “small minority,” she added that the government “may have set the stage for calling into question the country’s adherence to other key international human rights treaties and obligations that govern the protection of women and children.”

While recognizing the “considerable strides” made by Turkey over the last 15 years, Alsalem said, “Considerable implementation gaps exist in almost all social policies related to women’s rights, ranging from sexual violence and domestic violence to trafficking and continue to pose a considerable challenge.”

She noted that Turkish law does not specifically criminalize forced marriage or psychological violence.

“Turkey has made important legal and policy reforms to prevent and respond to violence against women and girls, but these fall short of its full capacity, potential and responsibilities to protect women and girls living on Turkish soil and do not correspond to the gravity of the situation,” Alsalem said.

Her report, to be presented to the UN Human Rights Council next June, examined Turkey’s policies and practices in combating violence against women and girls.

According to the We Will Stop Femicides platform, 280 women were killed by men last year and a further 217 were found dead in suspicious circumstances. Most of those murdered were killed by their husbands at home.

“The persistence of crimes, including killings, committed in the name of so-called ‘honor,’ as well as reports of forced suicides or disguised murders of women is particularly concerning,” Alsalem said.

The use of “custom” as a mitigating factor in sentencing those convicted of violence against women is against international law, she noted, while the lack of a specific law against domestic violence will “embolden the culprits and create a significant barrier for women in reporting their abuser.”

Alsalem cited Interior Ministry figures from 2016 to 2021 that showed around 8.5% of the murdered women had been granted a protection order against their abuser at the time of their deaths.

Police attitudes that domestic violence is a private matter led to claims being dismissed and victims discouraged from reporting abuse.

“In many ways, Turkey is at an important junction in its history. It can either consciously and deliberately choose to protect the gains made in advancing the rights of women and girls or risk backtracking on this important progress and leaving its women and girls behind,” Alsalem said.