Turkey would be the first member state to withdraw from the Council of Europe's 2011 Istanbul Convention. 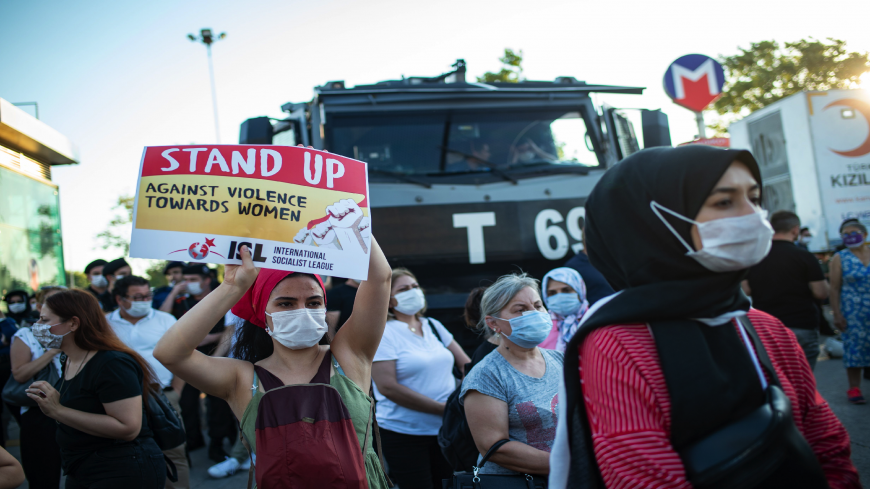 A demonstrator wearing a protective face mask holds up a placard reading "Stand up against violence towards women" during a demonstration for a better implementation of the Istanbul Convention and Turkish Law 6284 for the protection of the family and prevention of violence against women, in Istanbul, Turkey, on Aug. 5, 2020. - Photo by YASIN AKGUL/AFP via Getty Images

Turkey is considering quitting an international treaty on violence against women, amid a nationwide debate accusing the government of failing to do enough to protect women and girls.

Officials in the ruling Justice and Development Party (AKP) told Reuters they will decide by next week whether to withdraw from the Council of Europe's 2011 Istanbul Convention on preventing and combating violence against women.

Last month, AKP Deputy Chair Numan Kurtulmus said that signing the accord in 2011 and ratifying it in 2012 had been a mistake. He suggested the government was considering withdrawing from the convention, which would make Turkey the first state among 35 signatories to do so.

Femicide, which is defined as killing women and girls because of their gender, remains a major problem in Turkey. At least 474 women in the country were murdered in 2019, many for wanting a divorce, according to We Will Stop Femicide. The Istanbul-based group says most of the murders were committed by current or former partners, relatives or men whose advances the women rejected.

The murder of Pinar Gultekin at the hands of her ex-boyfriend has galvanized the debate and triggered widespread protests across Turkey. The 27-year-old woman's body was found in a wooded area in the Aegean province of Mugla strangled, burned and covered with concrete.

The United Nations says roughly 38% of women in Turkey will experience physical or sexual partner violence at some point in their lifetimes. Rights groups blame the Turkish government for failing to fully implement the Istanbul Convention and related laws.

“There is a bitter irony to the fact that the Turkish authorities are considering withdrawing from a convention bearing the name of its most iconic city,” Amnesty International’s Women’s Rights Researcher Anna Blus said in a statement.

“This discussion is deeply worrying, coming at a time when COVID-19 measures such as lockdowns have led to a spike in reports of violence against women and girls, with many women and girls trapped at home with their abusers or unable to easily access safety and support services,” she added.