Turkish women across political and ideological divides are united in anger over news that an abduction and rape victim has died. 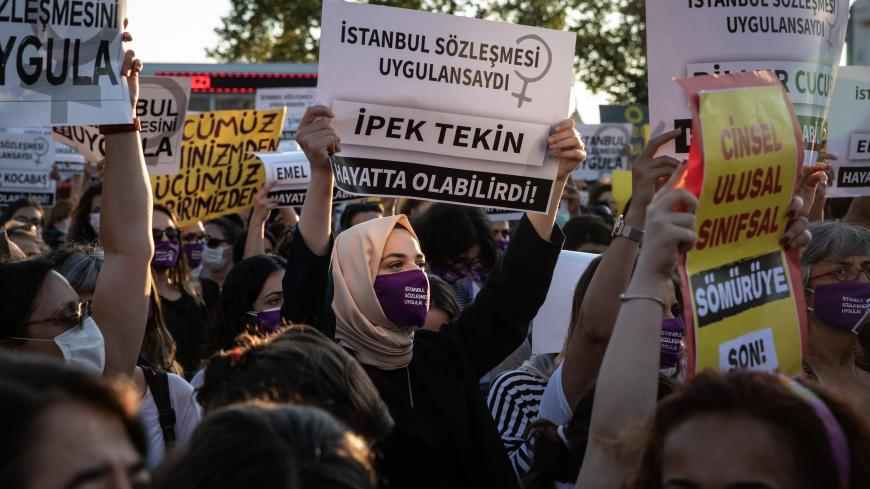 Women chant slogans and wave signs during a demonstration for the prevention of violence against women on Aug. 5, 2020, in Istanbul, Turkey. - Chris McGrath/Getty Images

Fury over the abduction and rape of an 18-year-old woman by a Turkish officer in the Kurdish-majority province of Batman in southeast Turkey reached fever pitch following news that the victim, identified as Ipek Er, had died today in the hospital where she was being treated after attempting to take her own life on July 16.

Er is but the latest victim of a ballooning number of femicides. At least 474 women were killed last year, mostly by men and many by their male relatives, marking the highest number in a decade.

Calls for the arrest of the suspect, Musa Orhan, were echoed across social media with many airing outrage over him being freed under judicial supervision following his detention on July 17. Orhan turned himself into the police today in the southeastern province of Siirt after prosecutors issued a warrant for his arrest, ostensibly in response to the public outcry. Over 350,000 tweets with the hashtag #MusaOrhan were posted prior to his arrest.

Orhan had initially denied the rape allegations. When confronted with a forensic report showing that the victim had been raped, Orhan claimed he had been inebriated but provided no further details. A secrecy order was slapped on the case following Orhan’s release. Idris Yayla of the pro-Kurdish Jiyan Haber news agency was put under criminal investigation of “inciting hatred” for daring to report on the tragedy. The move triggered a further bout of anger.

In a handwritten suicide note that was published by the feminist online news outlet Jin News, Er described how Orhan had raped her at his friend’s house, then threatened to kill her if she blew the whistle on him. “Now that I am going to die there is nothing left for me to fear,” the girl wrote. “Musa Orhan raped me. I cried and he said, ‘You can get [your hymen] stitched.’ He dragged me by my hair on the floor and said, ‘No one will believe you. You are defenseless.’”

The Er family’s calls for justice would have likely gone unheard had it not been for the unremitting campaign by thousands of women spanning the ideological divide. The affair unfolded against the backdrop of rising violence against women in Turkey.

Protests erupted last month following the murder of a 27-year-old woman by her ex-lover. Pinar Gultekin’s charred remains were found in a trash can in forest in the Aegean province of Mugla. The killer beat her, strangled her, burned her, then poured concrete over her body.

Cases of domestic abuse have increased under COVID-19 lockdown measures.

“There is a prevalent sentiment that laws are ineffective in Turkey. Faith in the justice system and the security services is waning,” observed political scientist Nezih Onur Kuru. “The conviction that justice cannot be served without social media pressure has become prevalent among voters no matter which political party they are in favor of,” Kuru told Al-Monitor.

Yet amid the uproar over the spike in femicides, the country’s ruling Justice and Development Party (AKP) began openly debating whether to withdraw from the Council of Europe’s convention on combating violence against women that was opened for signature in 2011 in Istanbul, with the full blessing of the AKP, and entered into force in August 2014. Tens of thousands of women have been demonstrating across the country to oppose the move.

The opening shots came from Turkish President Recep Tayyip Erdogan during a speech to inaugurate a new building for the Turkish Women and Democracy Association (KADEM). He said the Istanbul Convention was not in keeping with “the values of Turkish society” and therefore ought not to be considered binding.

On July 2, AKP deputy chair Numan Kurtulmus said Turkey had been misguided in signing the convention because it advocated “unsuitable” gender roles and undermined family values. He was echoing in subtler terms what fellow Islamists opposed to the convention have long claimed: that the convention somehow encourages homosexuality. The state-run Turkish Religious Affairs Directorate, the Diyanet, has been pouring oil onto the flames with its president, Ali Erbas, claiming in a Friday sermon in April that homosexuality “brings illness, corrupts generations and causes AIDS.” In July, Diyanet’s office in the central Anatolian province of Corum stoked feminist ire when it told a woman who sought its counsel over how to handle her potentially violent husband that she should “serve him tea” and “ask in a conciliatory tone why” he had intended to hit her.

Since Erdogan became president in 2014 he has steadily been promoting a conservative agenda that was already in evidence when AKP municipalities began implementing alcohol bans soon after the party rose to power in 2002. Religious schools to train imams have mushroomed across the country.

Erdogan has met with little opposition so far, most recently converting the iconic Hagia Sophia cathedral from a museum to a mosque. But in women's issues, he’s run up against resistance he clearly never reckoned on. Detractors include KADEM, of which his younger daughter Summeye Erdogan Bayraktar, is an executive board member. In a 16-point statement outlining the merits of the Istanbul Convention, KADEM refuted the notion it legitimized homosexuality, saying such interpretations were “ill-intentioned to say the least.”

The unexpected backlash has seen so-called Muslim feminists join hands with their secular sisters, much as they did when they pushed for groundbreaking reforms of the civil code in the early days of AKP rule, promoting gender equality. Ozer Sencar, the founder of Metropoll, an Ankara-based polling organization, said in opening the treaty to debate, Erdogan had probably acted under pressure from religious sects. Sencar contended that Erdogan had committed “one of the biggest mistakes of his political career,” one he “must now be regretting,” and one that had “caused women to unite.”

In a July Metropoll survey, 63.6% of respondents said they didn’t approve of withdrawing from the Istanbul Convention.

Gulseren Onanc, the founder of an Istanbul-based women’s advocacy group called the Equality, Justice, Women Platform, agrees that women are playing a critical role in pushing back against the government.

“The reaction displayed to the Musa Orhon affair and the Istanbul Convention proved once again that there is a very dynamic women’s movement in Turkey, one that’s been waging this struggle for a very long time and that is very well organized. Women have been putting up a fight, both on the intellectual plane through their public statements but also by demonstrating on the streets, allowing them to successfully apply pressure on the government,” she told Al-Monitor. “More recently, we have seen pro-secular and pious, conservative women join hands in support of the Istanbul Convention. This is an extremely important setback for the AKP in its efforts to divide and polarize women,” Onanc added. “It’s also a rare example of dissident views being articulated within the AKP and its women who did this. From here on, the AKP will think long and hard before any attempt to withdraw from the Istanbul Convention.”