The Biden administration has rebuked Turkey's "unwarranted" withdrawal from the landmark Istanbul Convention. 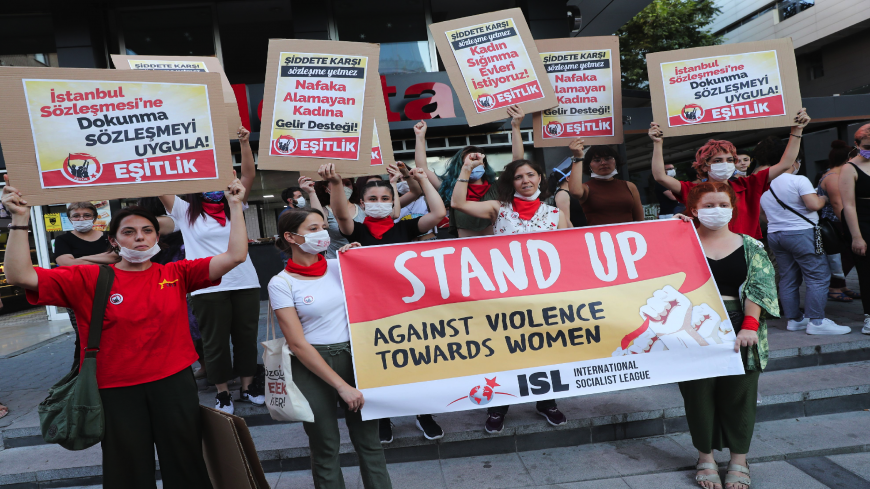 Women wearing face masks hold signs in Ankara, on August 5, 2020, during a demonstration to demand the government not withdraw from the Istanbul Convention, a landmark treaty on preventing domestic violence. The protests were the biggest in recent weeks as anger grows over the rising number of women killed by men in the past decade since the Istanbul Convention. The treaty's official title is the Council of Europe Convention on Preventing and Combating Violence Against Women and Domestic Violence, agreed upon in 2011. - ADEM ALTAN/AFP via Getty Images

Turkish President Recep Tayyip Erdogan issued a presidential decree on Saturday announcing the withdrawal from the 2011 Council of Europe Convention on Preventing and Combating Violence Against Women and Domestic Violence. Turkey, which was the first country to ratify the treaty, is now the first of 35 signatories to abandon it.

“Countries should be working to strengthen and renew their commitments to ending violence against women, not rejecting international treaties designed to protect women and hold abusers accountable,” Biden said of the convention named for Turkey’s biggest city. “This is a disheartening step backward for the international movement to end violence against women globally.”

Biden also noted reports in Turkey of rising femicide, which is defined as killing women and girls because of their gender. At least 474 women in the country were murdered in 2019, many for wanting a divorce, according to We Will Stop Femicide. The Istanbul-based group says most of the murders were committed by current or former partners, relatives or men whose advances the women rejected.

The Turkish exit from the women’s convention also drew condemnation from the Strasbourg-based Council of Europe, the continent’s main human rights body.

“This move is a huge setback … and all the more deplorable because it compromises the protection of women in Turkey, across Europe and beyond,” Marija Pejcinovic Buric, the council’s secretary-general, said in a statement.

Religious and conservative groups in Turkey say the European accord undermines traditional family norms, and in a statement, the Turkish government said the Istanbul Convention has been used to “normalize homosexuality."

The US criticism comes ahead of Secretary of State Antony Blinken’s expected meeting with Turkish Foreign Minister Mevlut Cavusoglu in Brussels this week. As Al-Monitor first reported, Blinken will hold separate talks with both Cavusoglu and Greek Foreign Minister Nikos Dendias on the sidelines of a NATO foreign ministers summit on March 23-24.

Ties between Washington and Ankara are strained over a number of issues, including Turkey’s deteriorating human rights record. Last week, the Biden administration slammed a Turkish plan to disband a pro-Kurdish opposition party, warning that doing so would “further undermine democracy  in Turkey.”

In February, the State Department issued a formal statement saying it was concerned by the treatment of student protesters in Turkey as well as the anti-LGBT rhetoric sparked by the demonstrations. A separate statement called on Turkey to immediately release prominent businessman and philanthropist Osman Kavala from prison and expressed concern over charges against US-based academic Henri Barkey.

More than two months into office, Biden has yet to speak with Erdogan despite placing phone calls to a number of regional leaders, including Israeli Prime Minister Benjamin Netanyahu and Saudi Arabia’s King Salman bin Abdul-Aziz Al Saud.