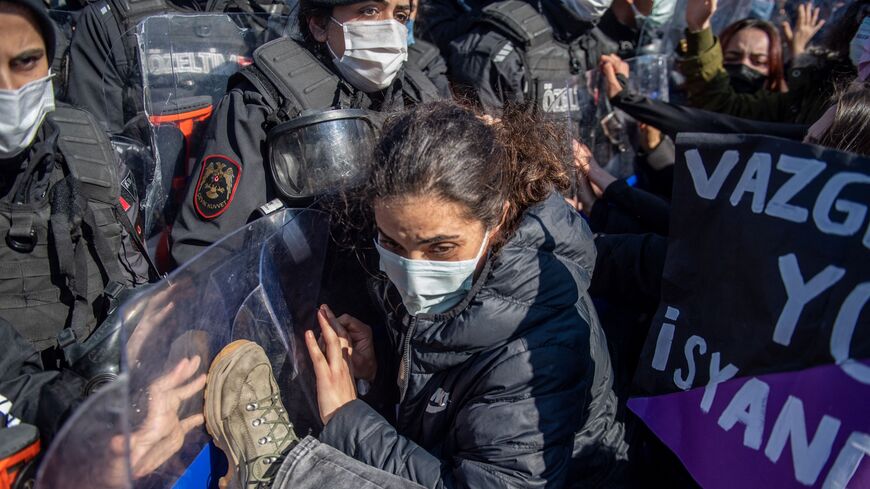 Turkish police block women demonstrating against Turkey's decision to withdraw from the Istanbul Convention at Kadikoy in Istanbul, on March 27, 2021. - BULENT KILIC/AFP via Getty Images

The Turkish government described the Joe Biden administration’s newly released report on human rights abuses around the world as “biased” against Ankara, the latest in the ongoing tit for tat between the two countries.

The annual report, which the State Department made public Tuesday, compiled a list of “significant human rights issues” in Turkey that included “reports of arbitrary killings, suspicious deaths of persons in custody, forced disappearances, torture, arbitrary arrest and continued detention of tens of thousands of persons.”

The Turkish Foreign Ministry pushed back on the US description of its NATO ally's rights record, blasting the report’s “unfounded allegations and biased interpretations based on ambiguous sources.”

According to the US report, Turkey has arrested or imprisoned more than 90,000 citizens for alleged terror links since the 2016 coup attempt. Many of those jailed are accused of ties to Fetullah Gulen, the Pennsylvania-based preacher whom the Turkish government accuses of organizing the failed coup.

The “US still fails to understand our rightful fight against this terrorist organization,” the Turkish statement said of Gulen, adding that the report’s descriptions of the Kurdistan Workers Party (PKK) “amount to extending support to the claims of terror affiliated circles.”

The report, while also noting PKK violence, highlighted “credible allegations” that the Turkish government contributed to civilian deaths as part of its fight against the outlawed Kurdish militants. The PKK is designated as a terrorist organization by Turkey, the European Union and the United States.

The report marks the latest instance of the Biden administration weighing in on Turkey’s rights record. The State Department recently condemned a Turkish plan to disband a pro-Kurdish opposition party and has also expressed concern for student protesters in Turkey, as well as anti-LGBT rhetoric used by politicians.

Most recently, President Joe Biden himself issued a statement condemning Turkey’s “deeply disappointing” decision to pull out from a landmark European convention aimed at protecting women.

Biden has made calls to several Middle East leaders since taking office in January, but yet to speak with President Recep Tayyip Erdogan, who he has previously described as an “autocrat.” Other Biden officials have, however, spoken with their Turkish counterparts.