Intel: US unsatisfied with Turkey's response to Syria rights abuses

The US government continues to raise reports of human rights abuses in Syria with Turkey, according to a new watchdog report. 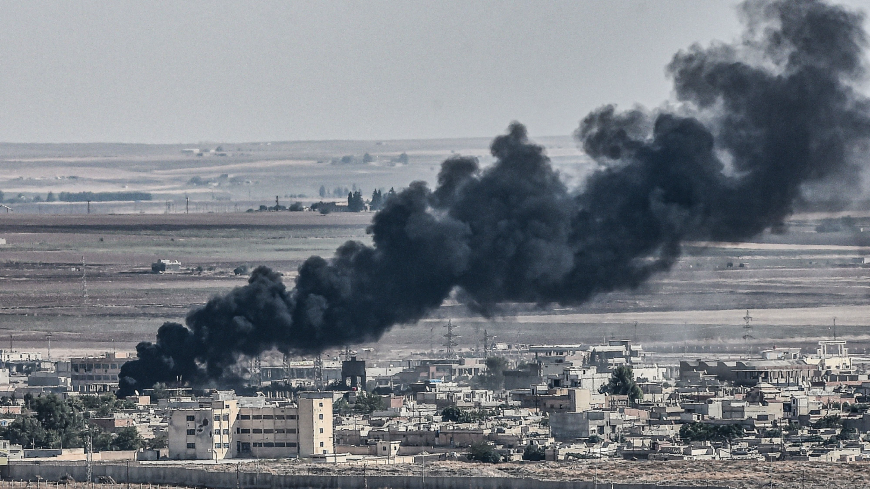 This picture taken on Oct. 13, 2019, from the Turkish city of Ceylanpinar shows smoke rising from the Syrian border town of Ras al-Ain as fighting rages along the border on the fifth day of a Turkish offensive in Syria against the Kurdish People's Protection Units (YPG) that has provoked an international outcry and left dozens of civilians and fighters dead. - OZAN KOSE/AFP via Getty Images

The US government has continued to press Turkey over alleged human rights abuses committed by its proxies in northeast Syria, but according to a new watchdog report, Washington is “not fully satisfied” with Ankara’s response.

The State Department remained “deeply concerned” by alleged rights violations in parts of Syria seized during Turkey’s military operations against Kurdish fighters in October 2019, according to a quarterly inspector general's report on Operation Inherent Resolve, the official name for the US mission against the Islamic State (IS) in Syria and Iraq.

US officials received reports of “killings, torture, kidnapping, extortion, arbitrary detentions and denial of water access to half a million civilians” in areas under the control of Turkey-backed Syrian opposition groups. Of particular concern, the report said, was documented violence against displaced Kurds as well as Yazidis in Afrin and Christians in Ras al-Ain.

“Turkish officials informed the US government that they take this matter seriously and support investigations of the allegations by the Syrian opposition,” the report said, adding that the State Department did not find its engagements with Turkey satisfying.

Why it matters: In the more than one year since Turkey launched an incursion into northeast Syria, rights groups continue to document abuses carried out by the Syrian National Army (SNA), an umbrella group of both moderate and hard-line Syrian rebel factions allied with Turkey.

Turkey’s border operation targeting the People’s Protection Unit (YPG), a Kurdish militia that makes up the backbone of the US-backed Syrian Democratic Forces, sent a wave of refugees spilling across the border into neighboring Iraq. The State Department estimates more than 70,000 civilians who fled during the Turkish offensive remain displaced, many of them afraid to return to SNA-controlled areas where arbitrary detentions, enforced disappearances and confiscation of property are commonplace.

What’s next: Turkey’s actions in northeast Syria have complicated an already tense relationship with the United States, which in December sanctioned Ankara over its acquisition of Russia’s S-400 air defense systems.

The NATO allies got into a tit-for-tat last week after the Biden administration condemned Turkish officials for their use of anti-LGBTQ rhetoric and recent arrests of student protesters.

A senior Turkish official then accused the United States of involvement in Turkey’s 2016 coup attempt, prompting a stern rebuke from the State Department, which called the comments "inconsistent with Turkey’s status as a NATO ally and strategic partner of the United States."

During their call last week, the White House said national security adviser Jake Sullivan and Turkish presidential spokesperson Ibrahim Kalim discussed “managing disagreements effectively.” According to the Turkish readout of the call, the war in Syria was among the topics discussed.

Know more: Cengiz Candar writes that hopes for a reset in US-Turkey relations are unrealistic given the state of human rights in Turkey. For more on the country's Syrian rebel proxies, read up on a recent Human Rights Watch report accusing Ankara of transferring Syrians to Turkey on dubious terrorism charges.