UN points finger at Turkey over rights abuses in Syria 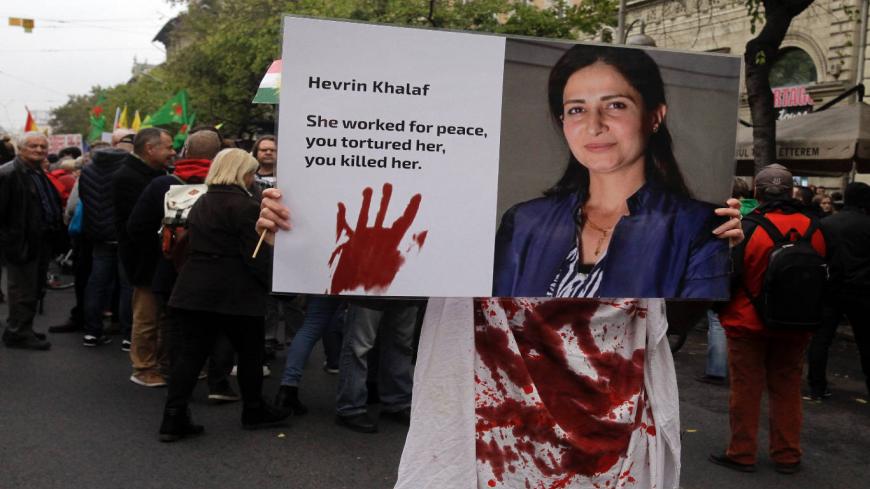 A demonstrator holds up a poster with a portrait of Kurdish female politician Hevrin Khalaf who was summarily executed by members of the Syrian National Army, a Turkish-funded and -trained group, during a protest on Nov. 7, 2019, in Budapest, Hungary. - BULENT KILIC/AFP via Getty Images

The United Nations Human Rights Council has published its latest biannual report on Syria, documenting abuses by all the parties in the nine-year-long conflict. The allegations leveled against Turkey and its Sunni rebel allies suggest they are engaging in gross violations of international humanitarian law.

Syria remains a human rights inferno where abuses committed in government-held territory are rivaled by those witnessed in areas held by the jihadi opposition and the Turkish army, the United Nations revealed today.

Based on investigations carried out from Jan. 1 to July 1 of this year, the latest report of the UN’s Independent International Commission of Inquiry on Syria makes for grim reading. The horrors inflicted by the Syrian government on its citizens are well known and are among the underlying causes of Syria’s bloody, nine-year-long civil conflict.

Torture, arbitrary detentions, targeting of civilians and enforced disappearances continue to be the norm in government-controlled Syria. Prison conditions remain dire. Inmates are confined to tiny cells drenched in feces, urine and vomit and are forced to survive on a loaf of bread and four olives per day. Some said they ate the olive pits “in order to get extra nutrition.”

Abuses occurring under Turkish occupation are, however, only just starting to be formally documented by the UN, with potential legal consequences for Ankara. The main perpetrators are brigades and factions operating under the military arm of the Istanbul-based Syrian opposition called the Syrian National Army, who are accused of organized extortion, looting, property expropriation, rape, kidnapping and murder. Some of the worst offenses were recorded in Afrin, the Kurdish majority enclave that was invaded by Turkish forces in January 2018.

“One boy described to the commission how he had been detained by the Syrian National Army military police in the city of Afrin in mid-2019 and held for five months in Syrian National Army headquarters before being transferred to the Afrin central prison and released in March 2020. While detained, both Syrian National Army members and Turkish-speaking officials dressed in military fatigues were present. The boy was handcuffed and hung from a ceiling. He was then blindfolded and repeatedly beaten with plastic tubes,” the report said.

Sexual violence is rife. “On two occasions, in an apparent effort to humiliate, extract confessions and instill fear within male detainees, Syrian National Army military police officers forced male detainees to witness the rape of a minor. On the first day, the minor was threatened with being raped in front of the men, but the rape did not proceed. The following day, the same minor was gang-raped, as the male detainees were beaten and forced to watch in an act that amounts to torture,” stated the report. The incident occurred in Afrin.

“Claims of egregious human rights violations targeting nearly every aspect of civilian life in Afrin have been reported since the start of the Turkish invasion in January 2018, but for two and a half years, the international community has paid little attention,” said Meghan Bodette, a Washington-based independent researcher who founded the Missing Afrin Women Project, a website dedicated to tracking missing women in the Turkish-occupied zone. Bodette told Al-Monitor, “This Commission of Inquiry report marks the first time that the United Nations has put forward such strong evidence of war crimes committed by occupying forces there — in particular, evidence of torture, and sexual and gender-based violence. It will hopefully serve as a much-needed first step toward accountability.”

By failing to intervene, specifically in cases where Turkish forces were present when the abuses took place, Turkey “may have violated” its human rights treaties obligations, the UN said, using typically cautious language.

With those words, legal experts contended, the UN is effectively suggesting that Turkey participated in violations of international humanitarian law.

Roger Lu Phillips, legal director for Syrians for Justice and Accountability, a Washington-based organization that is documenting rights abuses in Syria, said the “UN Commission of Inquiry clearly states that Turkey is an occupying power and, as such, has obligations pursuant to the Geneva Conventions and international human rights law.” Phillips argued that “Turkey has effective control because of the sustained presence of its military, imposition of Turkish law, and administration of schools and other public functions. The Syrian National Army are proxy forces of Turkey, and responsibility for the acts of the [Syrian National Army] is imputed to Turkey.”

Phillips observed in emailed comments to Al-Monitor, “Syria could challenge Turkey’s occupation of its territory as an act of aggression before the International Court of Justice, which would have jurisdiction to rule the occupation illegal.” Likewise, victims could bring suit against Turkey in the European Court of Human Rights. “Although there are obstacles to achieving enforcement of any judgment, victims might be able to raise the profile of abuses committed by the Syrian National Army, and to shame Turkey into reigning in its proxy forces,” Phillips concluded.

Others aired skepticism that the UN report would have an impact. A Western diplomat speaking on condition of anonymity in order to speak freely said, “This is unlikely to shift the diplomatic landscape. Turkish operations in northern Syria have been possible because of Russian and US approval. So they are the ones who could step up the international response. But it is unlikely Moscow will do anything” because it hopes to exploit the situation to get the Kurds to make peace with Damascus. Distracted by presidential elections and unwilling to pressure Ankara, the United States will do little either. As for the Europeans, the diplomat said, “Most EU countries refuse to fund projects in Turkish-controlled areas beyond humanitarian assistance, but this is not going to change the Turkish calculus. And when we think about Turkey’s use of Syrian mercenaries in Libya or recent calls made by these Syrian groups to defend Turkey against Greece, the UN report informs a potentially very worrying trend for the entire region."

In any case, Ankara rarely bows to EU pressure over rampant violations within its own borders let alone those occurring in the broad swath of territory it controls in northern Syria, dismissing these as baseless.

Still, there is a sliver of evidence that the UN censure may be having an effect. The UN reported that a member of the Syrian National Army-affiliated Ahrar Al-Sharqiyah brigade was sentenced by a military court of the Turkey-based Syrian Interim Government (SIG) for the murder of Syrian Kurdish politician Hevrin Khalaf.

US pressure is believed to have played a role. The SIG also banned the recruitment of child soldiers in May, a violation that is also committed by the US-backed Syrian Kurdish People’s Protection Units, the UN said.

Turkey, however, continues to detain Syrian Kurds inside Syria and render them to Turkey, where they are jailed and prosecuted on thinly supported terror charges, in a further breach of the Geneva Conventions, Phillips said.

Elizabeth Tsurkov, a fellow at the Center for Global Policy who closely follows the Syrian conflict, said Turkey “largely focuses on stopping the documentation of abuses, as the [armed opposition] factions did early on during [Turkey’s] October 2019 invasion of northeast Syria.”

“Turkish officers on the ground at times stopped abuses, but there is no clear overall policy on halting these abuses,” Tsurkov remarked in an interview with Al-Monitor.

Ankara has the leverage to do so because “Turkey is the one paying salaries to these fighters. If salaries were cut off from abusers, if there were serious prosecution of abusers, the suffering of civilians under the control of these factions will be greatly reduced,” Tsurkov said.