Scores of Syrians detained after Turkey's Operation Peace Spring began in October have been accused of links to the Kurdistan Workers Party and moved to a prison in Sanliurfa, Turkey. 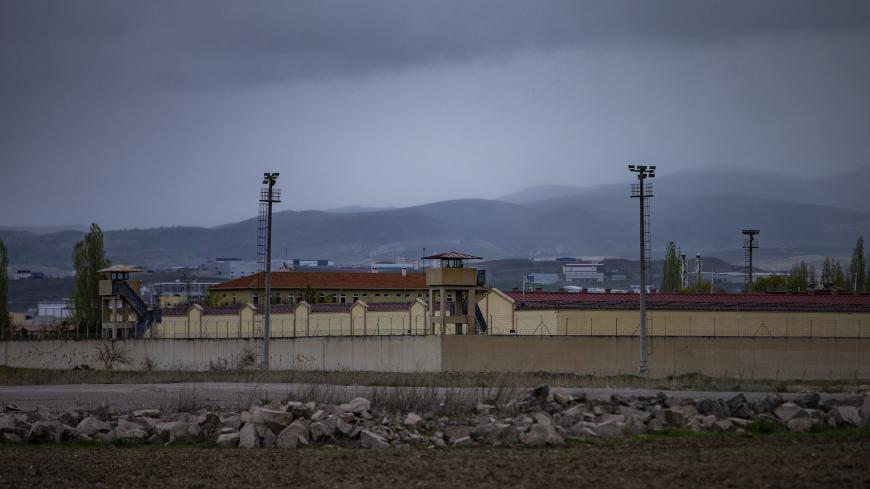 At least 70 Syrian nationals are being held in Turkish prisons and are facing prosecution on terrorism charges after being captured inside Syria after Turkey launched its Oct. 9 invasion of northeastern Syria.

Legal experts and Syrian activists say the Syrians are being held in breach of international law and have been subjected to torture and other ill treatment. Hidayet Enmek, a lawyer acting on behalf of five of the detainees, told Al-Monitor his clients had been tortured during their interrogation. Most are believed to be held in the Hilvan maximum security prison in Sanliurfa province.

The arrests were first confirmed in December by the Sanliurfa chief prosecutor’s office, which referred to the detainees as terrorists who had been apprehended committing crimes. They are being charged with targeting the unity of the Turkish state, membership in a terrorist organization and intent to kill.

All are accused of links to the Kurdistan Workers Party (PKK), which has been waging an armed insurgency against the Turkish state since 1984.

The Syrians were scheduled to appear in court April 20 but the hearing was postponed because of the COVID-19 pandemic. Enmek said they face aggravated life sentences if convicted as charged.

The case has been shrouded in secrecy and there has been no media coverage of it. Enmek is the only lawyer who agreed to speak on the record about the Syrians. “My colleagues are terrified,” he told Al-Monitor in a telephone interview. “The climate of repression has become even more suffocating in Urfa since the [failed July 2016] coup,” he said. Sanliurfa is also known as Urfa.

Enmek was among 11 lawyers detained in Sanliurfa in March on terror charges, part of an ongoing clampdown on human rights defenders, he said. Evidence against the lawyers has included secret testimony extracted under duress from some of the Syrian detainees in order to support prosecutors’ claims that the lawyers were connected to the PKK, Enmek said.

Lawyers only agree to defend the Syrians if contacted by their families and briefed on their backgrounds, “but this is proving very hard because the families themselves are terrified” for fear of retribution from the opposition rebels,” Enmek added.

The majority of the jailed Syrians are ethnic Arabs. But there are some Turkish citizens and PKK-rooted militants among the 106 people transferred from Syria to Turkey, Enmek said.

Some sought to avail themselves of Turkey’s repentance laws. “They are very poor and have no means of receiving money from their families. They can’t afford basics like soap and underwear, which are sold at the prison canteen,” he said.

The Sanliurfa Chief Prosecutor’s Office, contacted by telephone, told Al-Monitor there were “about a hundred” Syrian detainees in “various prisons" but declined to provide a breakdown by nationality of the detainees to Al-Monitor.  Until the trial starts it is impossible to assess how many, if any, had previously committed any crime inside Turkey.

Turkey has long accused the US-backed and Kurdish-led autonomous administration in northeast Syria and its military arm known as the People’s Protection Units (YPG) of being part of the PKK. Since August 2016 Turkey has launched three major offensives against the group and what Ankara calls the organization's “terror state.”

The YPG spearheaded the US-led coalition’s campaign to defeat the Islamic State.

Many of the Syrian detainees were either salaried members of the YPG or of the internal security apparatus, the Asayish, Enmek said.

Jwan al-Youssef, of the Kurdish Committee for Human Rights, who is following the case, said others worked in the civil administration. Speaking through an Arabic language interpreter, he told Al-Monitor that some of the Syrian detainees had no ties to the autonomous administration and its security arms at all. "Only their immediate relatives can visit them, and only if they have official ID documents, Turkish residency, or a passport. Few meet the criteria," he said.

A source who is closely following the case told Al-Monitor on condition of anonymity, “The black hole in this story is why Turkey is doing this. These people are very low-level guys.”

The plight of the Syrians came to the fore in an April 29 petition addressed to UN Secretary-General Antonio Guterres and to Michelle Bachelet, the UN high commissioner for human rights, by 41 Syrian civic organizations who called for UN intervention.

They said the detainees had been transferred to Turkish prisons in late 2019 after being held by Turkish-backed Sunni rebel factions. The arrests took place in rural areas near the towns of Tell Abyad and Ras al-Ain, which are currently occupied by the Turkish army. They said they had established the identities of at least 70 Syrian nationals who were detained and moved to Turkey after the October assault, named Operation Peace Spring.

The civic organizations called the Turkish presence an occupation and called for the detainees’ immediate release and repatriation. The Syrian government calls the presence of Turkish troops in northern and northeastern Syria an occupation as well and has called for their immediate withdrawal from a vast swath of territory spanning from Jarablus in the west to Tell Abyad in the east and including the Kurdish majority enclave of Afrin.

Bassam al-Ahmed, executive director of Syrians for Truth and Justice, a nonpartisan nonprofit documenting human rights violations in Syria, was one of the 41 signatories of the appeal to the UN. He told Al-Monitor in a telephone interview that Western officials had been briefed about the case and that they in turn had raised the case with their Turkish counterparts, but to no effect.

“The mass transfer of Syrian nationals on this scale is unprecedented. It’s a Guantanamo-like situation. It’s a violation of international law,” Ahmed said, drawing comparisons with the United States’ secret renditions of suspected terrorists to the US military prison within the Guantanamo naval base in Cuba.

Roger Lu Phillips, the legal director for Syrians for Justice and Accountability, a Washington-based organization that is also documenting rights abuses in Syria, told Al-Monitor in emailed comments, “It’s a violation of international humanitarian law to prosecute Syrians in Turkish courts.” The fact that all or some may be fighters is irrelevant, he said. Under the Fourth Geneva Convention, “Those taking part in hostilities are rendered outside combat once they are captured and detained. So, they are protected by [the convention,] which prohibits an occupying power from forcibly transferring civilians outside of the occupied territory for trial.”

Moreover, Phillips said, “It is not clear that Syrian civilians were put on notice that they could be charged with violations of Turkish law in Syria. Turkish law is presumptively only effective in Turkey.”

Phillips continued, “Turkey would have to pass special legislation to give its penal laws extraterritorial effect in Syria. It is not clear that Turkey has done so. Prosecuting Syrians for violations of Turkish laws in Turkey is therefore contrary to international law.”

Turkey insisted early on that Operation Peace Spring was “a limited cross-border intervention intended to fight terror organizations” that aimed to “enforce Syria’s unity and territorial integrity, protect the local population” and allow “the safe and dignified return of Syrian refugees” and was conducted in full respect for international law.”

But as videos of atrocities emerged, a flurry of condemnations ensued. One of the most chilling was the gruesome execution of the young Kurdish politician, Hevrin Khalaf, by Ahrar al-Sharqiya militants after being dragged out of her car. The killing was captured on video and widely shared. Her mother said her daughter had been so badly mutilated all that was left intact of her body was “a small piece of her jaw.”

Enmek said the Syrian detainees in Turkey had been beaten and abused by Turkish-backed rebels before being handed over to the Turkish army. Cicek Kobane, who served in the Women’s Protection Units (the Syrian Kurdish-led all-women’s militia that helped the US-led coalition defeat the Islamic State), is one of them. Her capture by the Faylaq al Majd [Glory Corps] battalion Oct. 21 was recorded by one of the militants on a mobile phone and uploaded to YouTube. One of the rebels scoops her up in his arms as the others shout “pig” and chant “God is Great” and “slaughter, slaughter.” She is then seen cowering on the ground as the rebels jeer. One says “beautiful.” The video caused an uproar.

Enmek said the rebels had shot Kobane in the leg and then stomped on her wound before handing her over to Turkish forces. She was taken to a hospital in Sanliurfa where she was treated for seven days before being transferred to Sanlirurfa’s notorious anti-terror police center and interrogated for 10 days. “I found her in a wheelchair there. She was probably subjected to sexual abuse by the rebels but she won’t talk about it,” Enmek said.

Turkey’s state broadcaster TRT offered its own version of events. In a minute and a half clip about YPG "terrorists," Kobane says, “They gave me medicine and treated me. They took care of me.” She later told Enmek she was forced into doing the video.

In its most recent report on the US military mission in Iraq and Syria to combat the Islamic State, the Department of Defense Inspector General said the State Department “remained concerned” about reports that Turkish-backed Syrian rebels who "may have engaged in violations of armed conflict in northeast Syria” and that it had been informed by Turkish officials that they took the allegations seriously and were supporting the [Turkish-based] Syrian Interim Government’s investigation into the violations. The document added that "in some cases” the State Department reported that "the Syrian Interim Government has tried, convicted and sentenced perpetrators.”

Elizabeth Tsurkov, a fellow at the Foreign Policy Research Institute who closely monitors the Syrian conflict, told Al-Monitor that Turkish-backed Syrian opposition "factions claimed in some instances that they are going to prosecute people responsible for crimes, including notably the execution of Hevrin Khalaf. But I am not aware of any such cases of prosecution.”

Tsurkov continued, “What I am aware of are people who are involved in crimes walking about freely. Three days ago, I spoke to a person on the phone who was involved in the execution of Hevrin Khalaf and he now lives in a stolen home in Afrin.”

The State Department did not respond to Al-Monitor’s request for comment about the case of the Syrians imprisoned in Turkey.