During an interview with Al-Monitor, Syrian National Coalition President Salem al-Meslet discussed recent US sanctions on Ahrar al-Sharqiya, the human rights situation in northern Syria and the US military presence in the war-torn country. 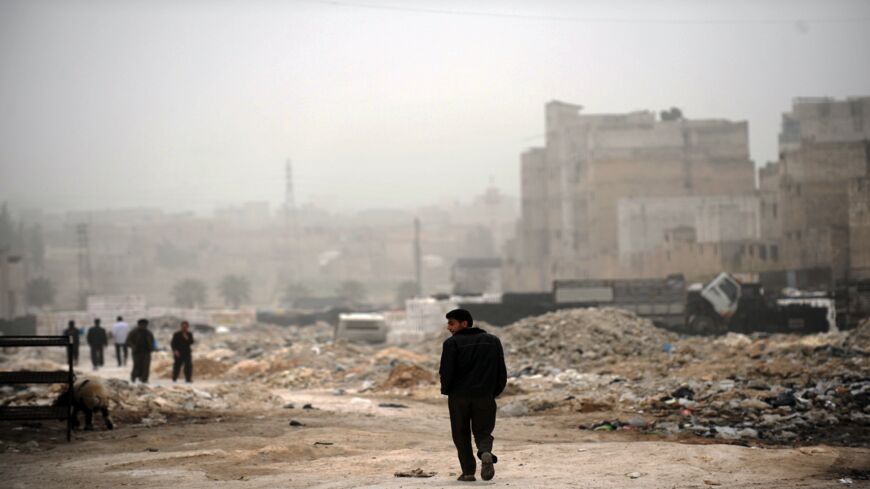 A Syrian man walks past destruction in the northern city of Aleppo on March 22, 2013. The UN lamented the escalating violence in Syria and extended a probe into widespread human rights violations in the war-torn country. - BULENT KILIC/AFP via Getty Images

The head of the exiled Syrian opposition acknowledges human rights violations committed by Turkish-backed fighters in northern Syria but says recent US sanctions have helped rein in the lawless proxy groups.

Salem al-Meslet, president of the National Coalition for Syrian Revolutionary and Opposition Forces (commonly known as the Syrian National Coalition), said he would support further investigation of the well-documented abuses carried out by Syrian rebel factions affiliated with his coalition.

“The coalition and the interim government really support any effort to eliminate any violations, to come and investigate,” Meslet told Al-Monitor in an interview in Washington.

He and a delegation of opposition figures met with US policymakers last week in hopes of persuading the Biden administration they still have a role to play in determining Syria’s future, after a decade of ruinous civil war between President Bashar al-Assad and the forces seeking his removal.

Complicating that message, however, are the many human rights violations carried out by a coalition of Turkey-backed hard-line and moderate rebel factions that are operating under the banner of the Syrian National Army. The SNA, which nominally reports to the coalition-affiliated Syrian Interim Government, participated in the October 2019 Turkish offensive against the US-backed Syrian Kurdish fighters that Ankara views as terrorists linked to a Turkey-based Kurdish guerrilla movement.

The United Nations Commission of Inquiry on Syria has documented a slew of rights violations committed by the SNA against Kurdish, Yazidi and other civilians living in a swath of the country effectively controlled by Turkey. The UN has described a pattern of arbitrary arrests, enforced disappearances, seizure of private property, the destruction of archaeological sites and other violence at the hands of some SNA factions. Al-Monitor’s own reporting confirmed ongoing abuses in the Kurdish-majority enclave of Afrin.

The UN commission has also documented abuses, though far fewer, carried out by US-backed, Kurdish-led militias in the region. The Syrian government stands accused of a host of war crimes and crimes against humanity.

Washington has pressed Ankara, the Syrian Interim Government and the rebel groups themselves to provide accountability for “gross violations of human rights abuses and violations under the law of armed conflict,” the US government’s latest inspector general report for the American-led campaign against the Islamic State said. A senior administration official told Al-Monitor in July the United States has raised its “persistent concerns” with both the Syrian Interim Government and its military wing.

As part of that effort, the Biden administration imposed sanctions on SNA faction Ahrar al-Sharqiya and two of its leaders, citing the group’s 2019 roadside execution of female Kurdish politician Hevrin Khalaf and its alleged recruitment of former IS members. The designation marked the first time the United States had sanctioned one of Turkey’s proxies in Syria.

“The sanctions that were imposed on Ahrar al-Sharqiya actually created a model for other groups to stay in line,” Meslet said, adding he supports "any sanctions for any violation” that occurs in Syria.

Nearly two years after Turkey’s incursion into northeast Syria drew widespread backlash on both sides of the US political aisle, Meslet says the SNA factions deployed by Ankara are listening to the Syrian Interim Government’s calls for restraint.

“They're listening because before there were some violations there. Now the situation is different,” Meslet said.

In a positive development, the UN reported last year that a military court affiliated with the Syrian Interim Government had quietly sentenced a member of Ahrar al-Sharqiya for killing Khalaf and others. The fighter's life sentence, however, was reportedly reduced to 10 years.

Roger Lu Phillips, legal director at the Syria Justice and Accountability Center, said there’s no evidence the rebel groups have scaled back their abuses or have been held to account for them in any meaningful way.

Of the Syrian opposition government in exile, Phillips added, “They need to take more concerted efforts to discourage the human rights violations, in particular abductions and confiscation of property within northern Syria.”

The Syrian National Coalition’s visit to Washington last week came as a delegation from the Kurdish-run Autonomous Administration of North and East Syria also visited the nation’s capital for their own meetings with US policymakers. The US military advises the self-administration’s military arm, the Syrian Democratic Forces, to counter the remnants of the Islamic State.

If the Syrian Kurds and the opposition agree on one thing, it’s the necessity of the American military presence in northern Syria. Unnerved by the chaotic withdrawal from Afghanistan, both delegations sought assurances from the Biden administration last week that the 900 US troops in Syria would remain.

“If they pull out, who will be there? Iran, Russia and the regime,” Meslet said. “The US withdrawal from Syria today or in the near future would mean we’re back to square one.”