Human Rights Watch documented the transfer of at least 63 Syrians to Turkey for prosecution on charges including membership in a terrorist group. 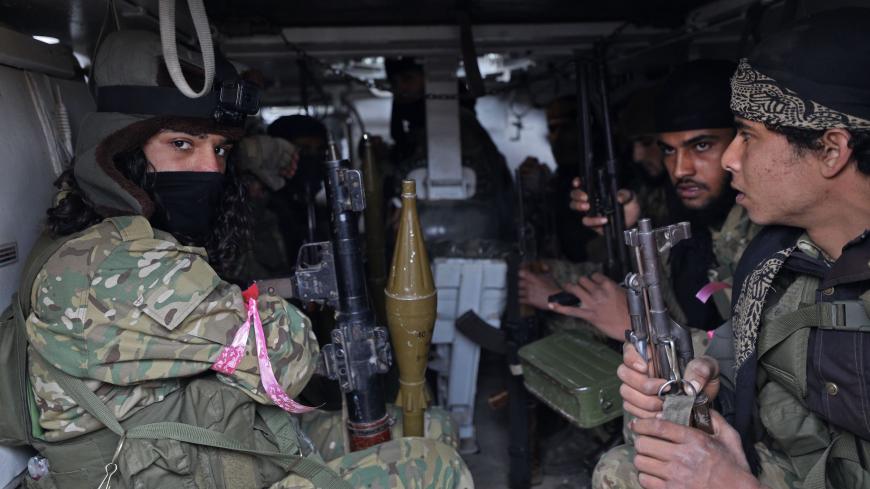 Members of the Syrian National Army, an alliance of Turkey-backed rebel groups, ride in an armored personnel carrier in the town of Sarmin, southeast of the city of Idlib in northwestern Syria, on Feb. 24, 2020. - OMAR HAJ KADOUR/AFP via Getty Images

Turkey and its proxy forces in Syria have arrested and forcibly transferred dozens of Syrians to Turkey to face trial under the “most dubious and vaguest of charges,” Human Rights Watch said in a report on Wednesday.

Turkish authorities and the Turkey-backed Syrian National Army (SNA) detained at least 63 Arab and Kurdish Syrians between October and December 2019 in Ras al-Ain, the New York-based rights group said. The detainees were then transferred to Turkey and charged under the Turkish penal code, despite their alleged crimes taking place in Syria.

The charges include “undermining the unity and territorial integrity of the state, membership in a terrorist organization and murder.” In October, five of the 63 Syrians were sentenced to life in prison without parole, according to the report. The trials of the other defendants are ongoing and they remain in detention.

“Not only have these Syrians been illegally transferred to Turkey for abusive prosecutions, but in an extraordinarily cruel move, the courts have imposed the highest sentence possible in Turkey — life without parole,” said Michael Page, HRW's deputy Middle East director.

Turkey took control of parts of northern Syria in an invasion that was sparked by President Donald Trump’s sudden decision in October 2019 to pull US troops from the region. Turkey deployed the SNA to push from its southern border the US-backed Kurdish fighters considered terrorists by Ankara.

“Turkish authorities, as an occupying power, are required to respect people’s rights under the law of occupation in northeastern Syria,” said Page.

The SNA, formerly known as the Free Syrian Army, consists of both moderate Syrian rebels who formerly fought the Syrian regime and hard-line factions. During the 2019 Turkish incursion into Syria, the SNA was implicated in a series of disturbing videos documenting torture and extrajudicial killings, including the roadside execution of prominent female politician Hevrin Khalaf.

The US State Department as well as human rights groups have accused the Turkey-backed group of widespread human rights abuses including kidnapping, torture and rape in the multi-ethnic Syrian city of Afrin and the surrounding areas.

In September, a group of United Nations war crimes investigators accused the SNA of killing and maiming civilians with IEDs as well as pillaging and appropriating private land in Kurdish areas. The investigators said the group’s transfers of Syrian nationals could constitute the war crime of unlawful deportation.

Ankara has previously said it would investigate any potential human rights violations committed by the SNA. HRW said Turkish commanders who knew or should have known about crimes committed by their proxy forces can also be held criminally liable.