Allegations of war crimes committed by the rebel Syrian National Army backed by Turkey in northeast Syria have forced Ankara to take steps to try to rein in its proxies. 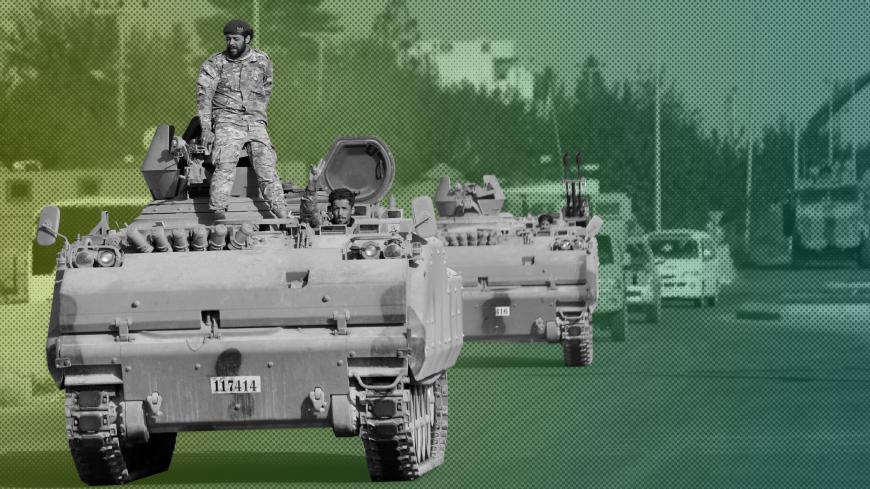 Members of the rebel Syrian National Army, Turkish-backed elements of the Free Syrian Army, travel in an armored vehicle in the Turkish border town of Ceylanpinar, Oct. 11, 2019. - REUTERS/Murad Sezer

The so-called Syrian National Army (SNA), an umbrella military command formed in early October consisting of some 80,000 fighters from Turkey-backed Free Syrian Army (FSA) militias, has been accused of serious human rights violation and possible war crimes in northern Syria, including the displacement of civilians, extrajudicial killings, looting and mistreatment of Kurdish prisoners of war. The violations have been highlighted on social media as well as reporting by Western media and documentation by human rights groups.

Among the more publicized incidents was the torture and assassination of the Kurdish politician Hevrin Khalaf by Ahrar al-Sharqiya on Oct. 12 along with the execution of her driver and a guard on the Hasakah-Manbij (M4) highway. Turkey-backed forces were also recorded executing captured Kurdish fighters, torturing others, and mutilating bodies, all violations that constitute war crimes. Other allegations include looting of administrative buildings and shops and attacks on civilian infrastructure, such as power lines and water supplies, medical facilities and on historical and religious sites.

Harsh international criticism of the militias' actions has put Turkey in the crosshairs and appears to have led it to recently issue a code of conduct for the Syrian forces titled “Fighter, Not Killer.”

The SNA has been backing up the Turkish military in the territories it controls in northern Syria. With the start of Operation Peace Spring on Oct. 9, some 18,000 SNA fighters moved into the highway pocket bounded by Tell Abyad, Ras al-Ain and the M4. Currently, some 10,000 of them are taking part in operations around Ras al-Ain, with the remaining 8,000 deployed in the Tell Abyad area.

The Syrian rebels bore the brunt of the Operation Peace Spring offensive, with at least 224 SNA members killed and 692 injured in clashes as of Nov. 15, while Turkish casualties stood at 11 dead and some 90 injured. The SNA force sent into northern Syria was three times bigger than Turkey's during the campaign and was not under the direct command of the Turkish military. Instead, the militias functioned as a semi-autonomous force under the control of Turkey’s National Intelligence Organization (MIT), an arrangement that led to frequent command, control and communication (C3) problems on the ground. SNA factions have taken advantage of this operative-strategic arrangement to advance their own interests, acting independently of Turkish authorities.

Aside from some references to Islamic law, the guidelines issued by Ankara draw largely on secular concepts enshrined in international agreements establishing fundamental rules of conduct in armed conflict, including the Geneva Conventions and The Hague Conventions.

Both the second and third sections concern norms of conduct toward enemy forces during armed conflict and treatment of prisoners of war according to the Third Geneva Convention (1949). A dozen articles of the convention explicitly reference the legal status of militia forces, laws of conflict, rights of the sick and wounded, distinction between combatants and non-combatants, status of prisoners of war, prohibition of torture, and medical assistance in conflict environments.

The second section emphasizes that combatants are also bound by the The Hague Convention (1954) and other relevant international accords to preserve historical and archaeological landmarks and religious shrines during military operations. SNA members are instructed to do so without discrimination. The third section deals with postconflict conduct and relations with civilians, including prohibitions on torture, degrading treatment during interrogations, and the use of violence against detainees.

In light of the indignation caused by SNA members filming executions they carried out, some of which were posted to social media, and their use of excessive violence during military operations, the code bans “taking photos and videos during military assignments,” stressing the importance of counter-intelligence measures.

Why did Ankara publish a document laying out a code of conduct? The core reason is that with the center of gravity shifting to the diplomatic front, another large-scale Turkish military operation in northeastern Syria is no longer likely. The Western media’s ongoing interest in the campaign was another reason. In sum, with negotiations underway on drafting a new constitution for Syria, Ankara sought to avoid incidents that might put it in a tight spot or negative light.

On another note, the code of conduct speaks to Ankara’s shortcomings in the use of proxies in foreign theaters. Unlike Iran, which has gained ample experience in unconventional and proxy warfare through the activities of the Islamic Revolutionary Guard Corps and its Quds Force since 1979, Turkey lacks such experience with the exception of its activities in northern Iraq in the 1990s, when its special forces led operations against Kurdistan Workers Party (PKK) fighters holed up in the region. In this case, they collaborated with local peshmerga who opposed the PKK's presence.

Since the 1990s, Turkey’s security architecture has not included a strong paramilitary outfit or other auxiliary forces. In terms of the army, this has been due to the rigid, hierarchical structure of the General Staff, and in the security sector in general owing to the military’s dominance over the sector. Today as well, to head off Islamization in the ranks of the Turkish military, Ankara wants to maintain sufficient distance between Turkish troops and SNA factions driven by varying degrees of jihadi sympathies. Liaising with the SNA is largely the job of former special forces members now working for MIT. Only time will tell whether the code of conduct will help Turkey tame its modern-day bashi-bazouks.