Turkish-backed fighters say the Kurdish dominated People's Protection Units (YPG) better withdraw from the safe zone within the 120-hour deadline under the Oct. 17 US-Turkish Operation Peace Spring agreement or else. 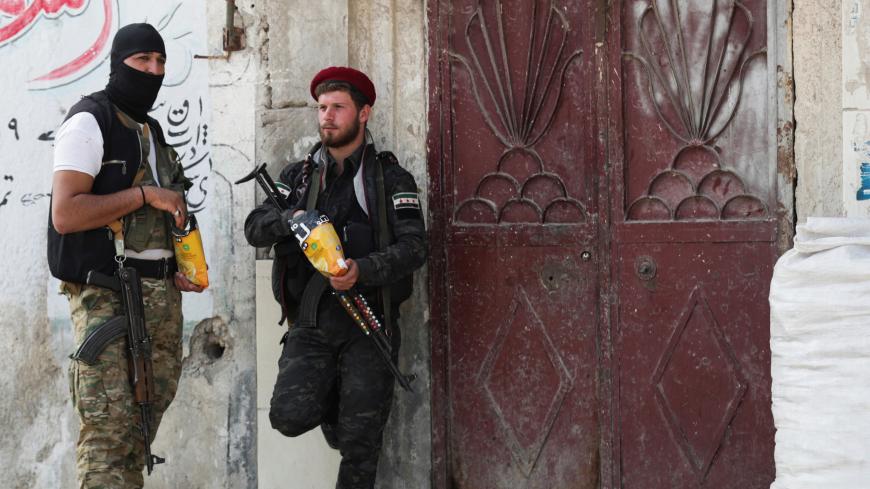 ALEPPO, Syria — The battlefronts between the Turkish army and the Turkish-backed Syrian National Army (SNA) on the one hand and the Syrian Democratic Forces (SDF) on the other have been relatively calm in Ras al-Ain in Hasakah province and Tell Abyad in Raqqa province. The air and ground shelling halted between the two sides after the United States and Turkey agreed Oct. 17 that Turkey's Operation Peace Spring would be suspended for 120 hours.

The SNA, which is affiliated with the Free Syrian Army, believes that the agreement does not necessarily mean that the battle is over but rather is a time limit for the SDF-led Kurdish People's Protection Units (YPG) to comply with the agreement, most notably by withdrawing from the safe zone some 20 miles (32 kilometers) along the Turkish-Syrian border.

SNA spokesman Maj. Yusuf Hamoud told Al-Monitor, “Phase one of Operation Peace Spring has been a success, and we managed to seize a large number of towns and villages. Had it not been a success and had not we made major advances against the YPG in record time, we would not have reached this agreement.”

He said, “The SNA welcomed the agreement because it allows us to meet the goals of Operation Peace Spring and forces the YPG to withdraw. This would save our Syrian people east of the Euphrates from hardship and ensure the terrorist group an easy exit,” Hamoud added.

Mustafa Sejari, the head of the SNA’s al-Motacem Brigades political bureau, told Al-Monitor, “The recent US-Turkish agreement is to the advantage of Syria and our people big time, and a great victory over terrorism. It a wise decision by Turkish President [Recep Tayyip Erdogan] and a responsible behavior by the US, under which all of the terrorist groups will withdraw from the safe zone 32 kilometers deep along the Turkish-Syria border. This way the road will be shut to the Russian, Iranian and [Syrian] regime’s ambitions.”

He added, “The safe zone will be protected by the SNA and managed by the interim [Syrian opposition] government, with the support of our Turkish allies. We want to establish this zone without resorting to military action. Yet the organization [the YPG] wanted to get into a lost adventure. It is now forced to leave, after Operation Peace Spring has been an excellent success.” He continued, “We stress our commitment to suspend the operation under the declared articles, and our readiness to resume it in case the YPG does not withdraw.”

Omar Gul, a Turkish journalist at the Humanitarian Relief Foundation, told Al-Monitor, “The YPG does not have enough power to face Turkey and the SNA. This is why they are forced to accept the agreement and withdraw from the safe zone under the agreement. One can say that the recent US-Turkish agreement is to the advantage of Turkey, but is not a final solution to eliminate the YPG. It is an organization that works to the advantage of those paying it, and failing to eliminate it will have negative implications in the long run. One can say that the agreement is a guarantee to keep the danger of this organization away from the Turkish border.”

Gen. Hasan al-Hamada, deputy minister of defense in the Syrian opposition’s interim government, told Al-Monitor, “The agreement to suspend Operation Peace Spring for a specific period until the YPG complies with its provisions on the withdrawal from the safe zone is to the advantage of the SNA, and it blocks the way of the ambitions of the [Syrian] regime forces and allies.”

Operation Peace Spring is supposed to end once the YPG withdraws from the safe zone, as stipulated in Article 11 of the US-Turkish agreement. In case the YPG does not comply, the battles will resume, perhaps more fiercely, once the 120-hour delay is over. Since the operation was launched Oct. 9, the battles focused on two main axes in northern Syria. The first is Ras al-Ain and the second is Tell Abyad.

Salim Idris, the minister of defense in the Syrian opposition’s interim government, told the Anadolu Agency on Oct. 17 that the battle the Turkish army and the SNA are engaged in has gone according to the plan. He said, “The battle’s achievements now consist of liberating more than 80 towns and residential complexes in the axes where the battles raged, and a surface area not exceeding 130 kilometers [81 miles]. Our fighters reached the Hasakah-Aleppo international highway.”

Operation Peace Spring was based on the military tactic of locking down large towns and their surroundings by seizing control of the surrounding countryside. Over the nine-day operation, the Turkish army targeted YPG posts, stations and ammunition warehouses in Ras al-Ain, Tell Abyad and the northern Raqqa countryside.

The air and ground Turkish shelling reached the far northeast of Syria, in response to YPG shelling of Turkish areas near the border with Syria. The fire that paved the way for the Turkish and SNA advance forced the YPG to retreat and withdraw from the small towns and villages to Tell Abyad and Ras al-Ain. Later on, the Operation Peace Spring forces managed to advance swiftly and take control of Tell Abyad after cordoning it. Operation Peace Spring has, however, failed to take control of Ras al-Ain despite besieging it Oct. 17.

Monzer Mohammad, a SNA fighter, told Al-Monitor, “If the YPG does not comply with the agreement within 120 hours, I expect more violent battles to resume. Our fighters and the Turkish army will be ready whenever asked to resume fighting.”

He added, “If the other party withdraws from the safe zone, the objectives of Operation Peace Spring would then be met without the two armies shedding blood to reach this goal.”