The Syrian National Army’s main goal behind its participation in Operation Peace Spring is to get rid of the Kurdish-dominated People’s Protection Units and the Democratic Union Party. 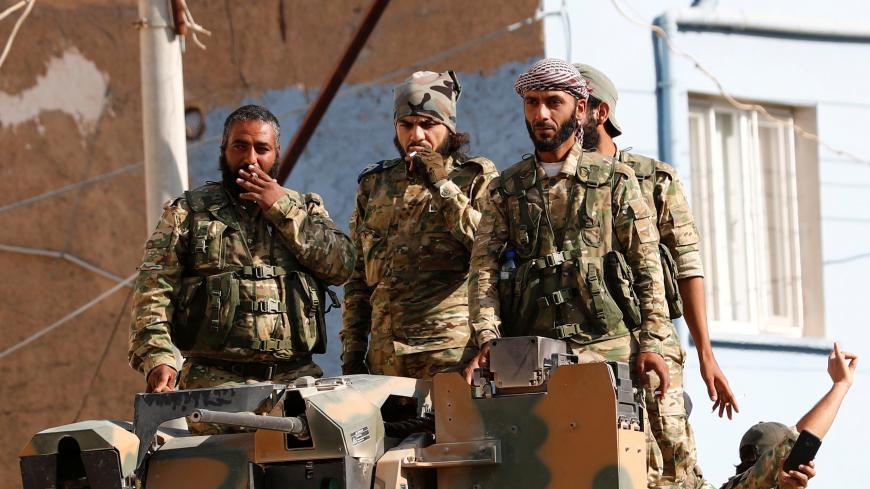 Members of the Syrian National Army, also known as the Free Syrian Army, stand on top of an armored vehicle in the border town of Ceylanpinar, Turkey, Oct. 11, 2019. - REUTERS/Murad Sezer

On the night of Oct. 17, Turkey announced its agreement to suspend Operation Peace Spring in northeastern Syria for 120 hours. The announcement came following a meeting between Turkish President Recep Tayyeb Erdogan and US Vice President Mike Pence in Ankara that day.

“We have already begun to facilitate [the People’s Protection Units' (YPG)] safe withdrawal from the nearly 20-mile-wide safe zone area, south of the Turkish border in Syria,” Pence told reporters at the US Embassy in Ankara.

Since the operation began, the Turkish army and its Syrian allies have managed to take control of dozens of villages and towns in the area, most importantly Tell Abyad. Ground forces, meanwhile, have advanced on two main axes: first in Ras al-Ain in Hasakah province, and second in Tell Abyad region in Raqqa province.

The Turkish army had been gaining ground before the pause in the offensive was announced Oct. 17. It seized the villages of Shallah, Asfouriya, al-Burqa, Jamah and Manajir, as well as grain silos in Ras al-Ain.

The spokesman for the National Army, Maj. Youssef Hamoud, told Al-Monitor, “The suspension of the military operation does not mean it ended. We are completely ready to continue the operation. But we are now waiting to see if the US keeps up its promise to remove the YPG from the safe zone.”

Hamoud added, “We, in the National Army, are part of the deal reached between the US and Turkey, and we have accepted negotiations. We hope our goals as a national army fighting for the Syrian revolution are achieved.”

The National Army, which is affiliated with the Turkish-backed Free Syrian Army (FSA), considers Operation Peace Spring its own strategic battle that is supposed to achieve its many goals.

Hisham Esskeef, the deputy head of the political bureau of the FSA-affiliated Liwaa as-Salam, told Al-Monitor, “The battle against the YPG is a decisive one that will [eventually] achieve the goals of the Syrian revolution.”

Esskeef added, “Operation Peace Spring is the first battle the National Army is fighting since the National Liberation Front (NLF), affiliated with the FSA, joined its ranks Oct. 4. [The operation] is also the first major challenge for this army.”

He further noted, “The main goal of the operation is to rid our Syrian families east of the Euphrates from the repression and military conscription imposed by the YPG against Syrians from all walks of life. Our battle is not against an entity, but against a terrorist organization.”

Hamoud, for his part, said, “Eliminating the PYD is necessary for the Syrian revolution, since the organization was used by the Syrian regime to stop the revolution since its start in 2011. The PYD has repressed our Kurdish brothers, arrested those opposed to them and assassinated Kurdish revolutionary figures, like Mashaal Tammo.”

Hamoud added, “The National Army has greatly participated in Operation Peace Spring, with more than 15,000 of our fighters taking part in the operation. The National Army is ready to send more fighters if the military operation resumes.”

The military commander of the FSA-affiliated al-Hamza Brigade, Lt. Gen. Abdallah Halawa, told Al-Monitor, “The elimination of the PYD means for us the end of a separatist project. It also aims to prevent the division of Syria and prevent the regime from carrying out demographic changes east of the Euphrates. The success of Operation Peace Spring — whether through war or negotiations with the US — will help millions of Syrian migrants and displaced return home, knowing that the safe area that will be established will be their safe haven.”

Abu Alaa al-Halabi, a media activist based in Aleppo’s northern countryside, said the area Turkey and its Syrian allies are seeking to control through Operation Peace Spring is a treasure for the opposition as it is rich in natural resources such as oil and is a fertile land where many crops are cultivated.

Halabi told Al-Monitor, “In the event that the opposition controls some of these resources east of the Euphrates, the Syrian Interim Government will benefit from them [resources] to carry out major service projects for the people. Meanwhile, the resources can also contribute to the ongoing revolutionary and armed movement until the fall of the regime in Damascus.”

Ibrahim al-Hajji, a judge who fled Manbij city under the control of the YPG in Aleppo’s eastern countryside, believes the National Army has a lot to gain from Operation Peace Spring, most importantly the establishment of a safe zone to host thousands of refugees and migrants.

Hajji told Al-Monitor, “Operation Peace Spring is in the interest of the Syrian people, and our interests intertwined with those of our Turkish ally. The operation will allow us to control the region where the people have suffered from the Islamic State and from the practices of the PYD. The people there support us and our fighters are disciplined now more than ever; they are patriotic and are defending the principles of their revolution. They will not allow any groups to mess with the unity of their great land and will not let their sacrifices be in vain.”

A fighter from al-Hamza Brigade told Al-Monitor on condition of anonymity, “A large part of the National Army fighters taking part in the [Turkish] operation hail from east of the Euphates, from the provinces of Raqqa, Deir ez-Zor and Hasakah. Those fighters are fighting to return to their areas after expelling the YPG."