Turkish-backed rebels fight each other in Ras al-Ain, Syria

Syrian rebel groups backed by Turkey clashed with each other in the border town they captured from Kurdish forces last year. 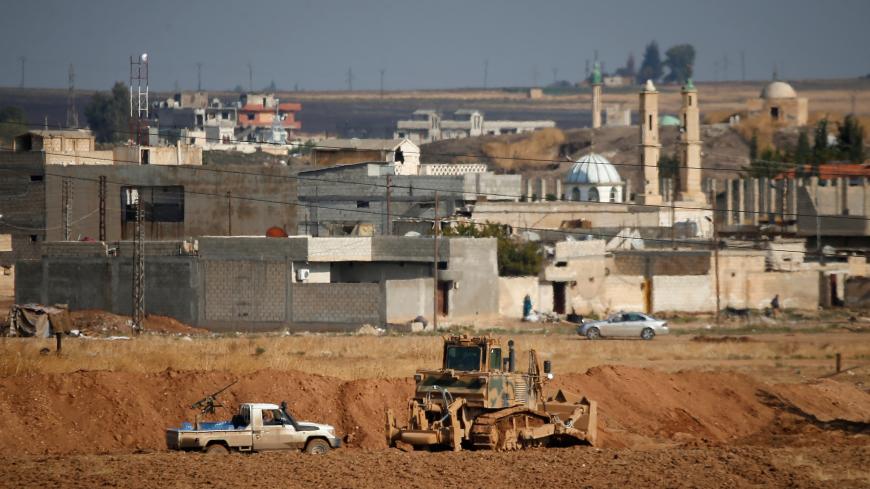 A vehicle belonging to Turkey-backed Syrian rebel fighters is parked next to a Turkish military bulldozer in the Syrian town of Ras al Ain, as seen from the Turkish border town of Ceylanpinar, in Sanliurfa province, Turkey, October 30, 2019. - REUTERS/Kemal Aslan

Turkish-backed Syrian rebel groups are fighting themselves in the border town of Ras al-Ain, which is experiencing renewed violence since Turkey ended its major military operations in northeast Syria in November.

The Syrian Observatory for Human Rights reported that Ahrar al-Sharqiya and the al-Mutassim Brigade began fighting with machine guns and rocket launchers Monday. The Syrian state news agency SANA also reported fighting between the two groups. Both the observatory and the news agency reported casualties among the fighters.

Ras al-Ain is near the border with Turkey and has a population of Arabs and Kurds. The Kurdish People’s Protection Units (YPG) took the city in 2013. In 2019, Turkey and its Syrian rebel allies in the Syrian National Army (SNA) took the city from the YPG.

Turkey began its incursion into northeast Syria in October because it considers the YPG to be an offshoot of the Kurdistan Workers Party (PKK), which has fought Ankara for decades inside Turkey.

The groups in the SNA originally fought the Syrian government in the civil war. The SNA was formed in 2017 and since then has largely battled the YPG for territory in northeast Syria, though it has fought the Syrian army and the Islamic State as well. The YPG is the dominant force in the US-backed Syrian Democratic Forces, which control most of northeast Syria.

A Syria analyst at the Turkish think tank SETA said the fighting began when a division of the SNA from Deir ez-Zour farther south tried to take an area controlled by the al-Mutassim Brigade in Ras al-Ain. “Mutassim put up resistance and small clashes happened which ended very soon due to the interference of the military police of the SNA with Turkish backing,” Omer Ozkizilcik told Al-Monitor.

Turkey-backed groups have been accused of several human rights violations in Ras al-Ain and other areas they control. Some local Kurds told Al-Monitor that Turkey’s Syrian rebel allies stole property from them in the city.

The Turkey-YPG conflict has displaced thousands, prompting concerns from Kurds that demographic change is taking place in the area. Others in northeast Syria reject the rule of the YPG, including its use of conscription.