The explosion during the holy month of Ramadan in the city controlled by Turkish-backed Syrian rebels killed at least 36 and wounded at least 40. 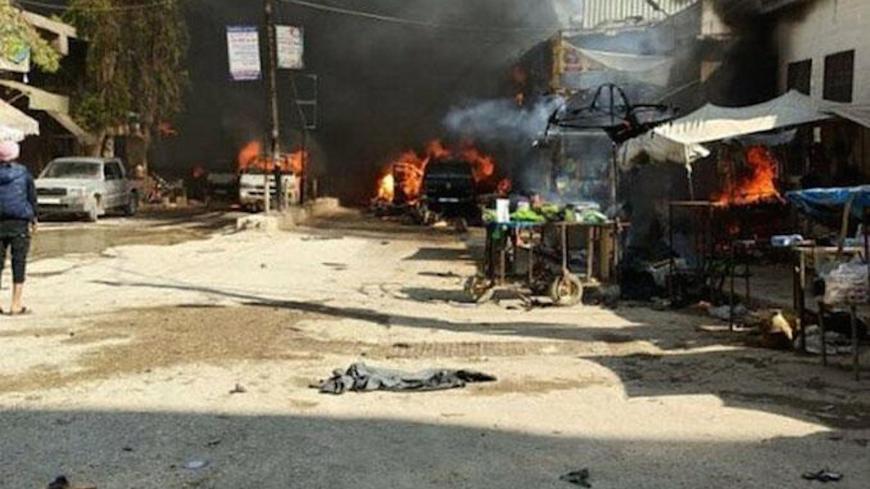 Footage captured from video shows burning vehicles and shops after a fuel tanker exploded in an attack in Afrin, Syria, on April 28, 2020.

A car bomb ripped through the Syrian city of Afrin on Tuesday, killing dozens. It was the latest security incident in the area Turkish-backed Syrian rebel forces took from Kurdish forces in 2018.

The UK-based Syrian Observatory for Human Rights said a bomb-laden fuel truck exploded in an outdoors market in the city, killing at least 36; many died from burns. The Turkish Defense Ministry said 40 had died, while the Syrian Civil Defense, aka the White Helmets, put the death toll at 42. Six Turkish-backed fighters were among the dead, and at least 40 people were wounded, some critically, the observatory said.

Videos posted on social media showed fires engulfing several vehicles and much of the street.

“Most of them were burned to death in the inferno,” the White Helmets, which operates in rebel-held areas, posted on Twitter.

During the holy month of Ramadan, the market is often full of shoppers in the hours before residents break their daily fasts.

The Kurdish group the People’s Protection Units (YPG) took control of Afrin early on in Syria’s civil war. The city has a mixed population of Kurds and Arabs.

In 2018, Turkish-backed Free Syrian Army fighters captured Afrin from the YPG. The Turkish government considers the YPG an offshoot of the Kurdistan Workers Party, which has battled Ankara for decades.

The operation forced thousands of Kurds to flee the city and many describe their flight as forced demographic change. Since the takeover, there have been multiple reports of looting and kidnapping by Turkey’s allies in the city.

Turkey’s Defense Ministry blamed the YPG for the attack in a statement on Twitter. A spokesman for the Syrian Defense Forces, the US-backed umbrella group led by the YPG, did not immediately respond to Al-Monitor’s request for comment.

In October, Turkey launched Operation Peace Spring and took more YPG territory in Syria, including the city of Ras al-Ain. Major combat operations ended in November, but some Turkish analysts say the YPG continues to attack in some areas.