A truck explosion led to more than 50 deaths Tuesday in Turkish-controlled Afrin, Syria. 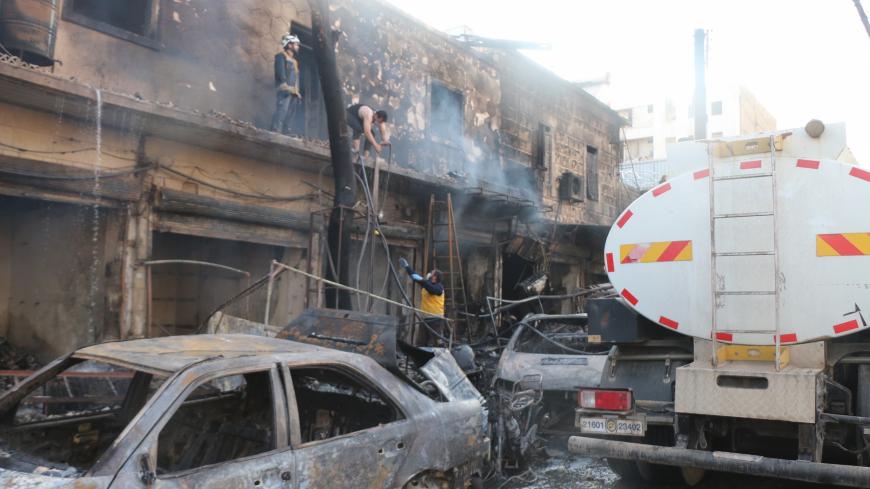 Civil defense members work to extinguish a fire after a truck bombing in Afrin, Syria, on April 28, 2020. - Photo by White Helmets / Anadolu Agency via Getty Images

Syrian Kurdish groups have condemned Tuesday's bombing in Turkish-controlled Afrin and denied responsibility after Turkey accused them of carrying out the attack that killed more than 50 people.

Mazlum Kobane, the commander of the Kurdish-led Syrian Democratic Forces (SDF), called the event a “terrorist act” and blamed Turkish-backed forces for it.

“What happened in Afrin yesterday was a condemnable terrorist act resulting in the loss of innocent lives,” Kobane posted in Arabic on Twitter today. “This criminal act is the result of the policy of destruction carried out by the Turkish occupation and its mercenaries.”

On Tuesday, an explosives-laden fuel truck blew up in Afrin in northern Syria, leading to at least 52 deaths, according to the UK-based Syrian Observatory for Human Rights. There were fighters, as well as civilians and children, among the dead, the observatory said. The blast caused a massive fire in the area of the explosion that engulfed nearby vehicles and structures.

The Kurdish group the People’s Protection Units (YPG) took control of Afrin, which has a mixed Kurdish and Arab population, in 2012. Turkey considers the YPG an offshoot of the Kurdistan Workers Party in Turkey that has long fought the Turkish state. The United States backed the YPG in its fight against the Islamic State, and Turkey grew anxious as the YPG took control of much of Syria’s border area with Turkey and established autonomous rule there. In 2015, the YPG joined with Arab and Christian groups to form the US-backed SDF to continue fighting in IS. YPG commanders lead the SDF, though it is a multi-ethnic force.

Turkey and rebels it supports in the Free Syrian Army took Afrin from the YPG in 2018, causing Kurds to flee. The Turkey-YPG conflict continued in October 2019 when Turkey invaded northeast Syria, taking more areas from the western parts of SDF territory as part of Operation Peace Spring.

Following Tuesday’s explosion, the Turkish Defense Ministry blamed the YPG for the attack.

The YPG issued a statement saying claims of its involvement in the attack are “removed from the truth.”

“Some of the parties that occupied Afrin attributed responsibility to the People’s Protection Units (YPG) before confirming that,” the statement read. “We have no connection to what happened.”

Major hostilities between Turkey and the YPG ended in November of last year. Some fighting continues, however.