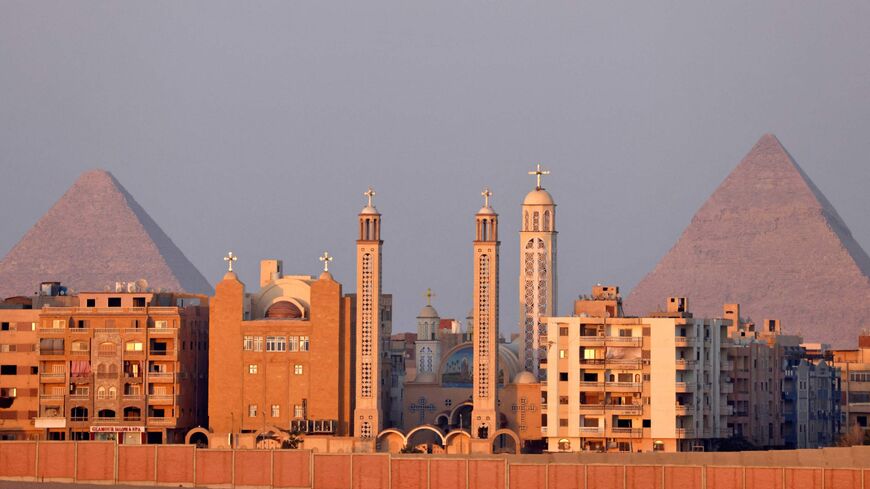 A picture taken on July 13, 2022, shows the Blessed Virgin Mary Church and St. Anba Reweiss in the Ahram Gardens district with the Great Pyramids at the Giza Pyramids necropolis in the background, on the southwestern outskirts of the Egyptian capital Cairo. - KHALED DESOUKI/AFP via Getty Images

The Russian Orthodox Church, also referred to as the Moscow Patriarchate, accepted the new headquarters in a June 25 ceremony. Gorbachev celebrated the first mass there.

In a statement published on the website of the Russian Patriarchal Exarchate of Africa, Gorbachev stressed the importance of the Coptic Church and its role in the history of Egypt and highlighted the close relations between the Russian and Egyptian churches over the course of history.

“We were extremely happy to hold the first divine liturgy at the headquarters that were donated by the Egyptian Church, and we are deploying all efforts to make sure the Coptic Church in Russia feels the same way we feel in Egypt,” he added.

Gorbachev went on to say that he visited 11 African countries including Egypt, Uganda, Kenya, South Africa and Madagascar, which all expressed willingness to cooperate with the Russian Church. He described the June 25 mass as “a historic event and an important one" that "will help the church spread in the African continent to play a more prominent role among African communities.”

The pope welcomed the establishment of the Russian Patriarchal Exarchate of Africa, saying, “We wish them every success in their mission in Egypt and other African countries.”

Speaking to Al-Monitor by phone, Heba al-Bashbeshi, researcher at the Institute of African Studies at Cairo University, said that the Russian request shows its interest in having a strong presence on the African continent, a major shift in the Russian strategy toward Africa.

She added that Russia's humanitarian and spiritual outreach in Africa will make it very influential in Africa and promote its relations with African countries alongside its economic and military ties.

She said that Russia chose Egypt to be the administrative and spiritual headquarters of the Russian Church in Africa because Cairo is considered a major religious hub.

Ramses Najjar, adviser on religious freedom in the Egyptian Orthodox Church, told Al-Monitor by phone that the Russian request marks the first time that the Egyptian Church and its Russian counterpart have joined forces.

He said that the Egyptian Church is the oldest and largest Orthodox Church in the Middle East and Africa and it is a crucial institution for Russia to develop ties.

He added that Pope Tawadros welcomed the Russian request to have the Egyptian Church serve to unify the Orthodox community through intellectual, cultural and religious exchanges.

Kamal Zakher, a Coptic thinker who promotes church reform and separation between church and state in Egypt, told Al-Monitor by phone that the Russian Church’s effort reflects Russian appreciation and respect for Egypt and the strength of relations between the two countries as well as Egypt’s importance on the African continent.

Zakher does not see any political dimension for the Russian Church’s request. He added that the Russian request is an effort to support dialogue and exchanges between the two churches and avoid any confusion and misunderstandings.