After a blaze in a Giza church killed dozens, the Egyptian government says it will systematically review the safety conditions of churches across the country. 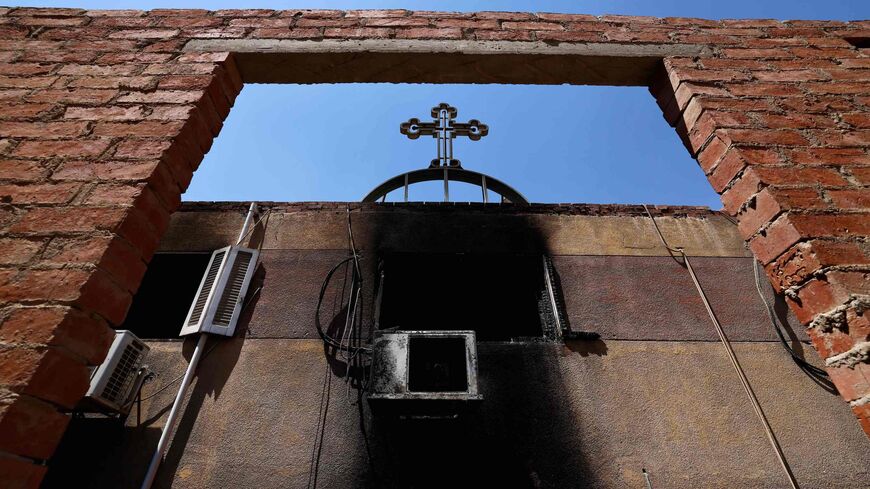 A picture shows the damage at the Abu Sifein Church in Giza on Aug. 14, 2022, after more than 40 people were killed when a fire ripped through the Coptic church during Sunday Mass. - KHALED DESOUKI/AFP via Getty Images

CAIRO  — The deadly fire that broke out during Sunday Mass at Abu Sifein Church in Egypt’s Giza Aug. 14 prompted the Egyptian government to announce it would review the safety conditions of churches across the country.

The blaze killed 41 people and injured 14 others, according to the Egyptian Ministry of Health.

Hours later, Egyptian Minister of Social Solidarity Nevin al-Kabbaj said in a statement televised on Al-Arabiya, “The Egyptian state is working on a complete review of the safety conditions of churches, particularly old ones, to prevent and avoid any new disasters, especially after the fire of Abu Sifein Church in Imbaba.”

She explained that the government expects to close down some dilapidated buildings and replace them where possible, adding, “Some old churches are located in unsuitable and unsecured residential neighborhoods, on streets that do not allow access for firefighting vehicles.”

Preliminary investigation into the accident showed that the fire started with an electrical malfunction in an air conditioner and filled the church with thick black smoke that was the main cause of injuries and deaths.

Hani Samir, an eyewitness, told Al-Monitor, “The church is located on a very narrow street in the Imbaba neighborhood of Giza. This is one of the most densely populated neighborhoods in Egypt. The church building does not have the traditional character of Egyptian churches. It's a multi-story house that was turned into a church years after its construction due to the complicated procedures for obtaining permits to establish churches.”

The Abu Sifein Church was located on the fourth and fifth floors of a building in a narrow street packed with buildings. The small stairs and few exits hindered escape for about 500 people who were attending Sunday Mass and children who were at the daycare also located in the building when the fire occurred.

The head of the Coptic Orthodox Church, Pope Tawadros II, remarked in an Aug. 15 telephone interview with Egypt's DMC channel that the church's small space of just ​​120 square meters was “suitable for a residential apartment, but not a church." He called on the Egyptian government agencies to help expand or relocate churches to accommodate large numbers of worshipers.

The spokesperson for the Egyptian Coptic Church, Moussa Ibrahim, told Al-Monitor that the forthcoming inspections are “a positive action worthy of support and encouragement," but warned that there is no official inventory of churches to check.

Less than two days after the Abu Sifein fire, the Egyptian Ministry of Interior announced that there was another small electrical fire Aug. 16 in the Church of Our Lady and St. Moses the Black in Giza governorate. No casualties were reported.

That same day, a major fire broke out in Anba Bishoy Church in Minya, south of Cairo, also without any casualties. The church reported that the fire was unintentionally caused by two children playing with candles near the altar.

Ibrahim, the spokesperson, said, “Accidents happen. These incidents were not intentional and they happened to take place simultaneously.”

Al-Watan columnist Kamal Zakher, who is also the coordinator of the Secular Coptic Current, which promotes church reform and separation between church and state in Egypt, praised the state’s plan to review the safety conditions of churches.

“Churches must be evaluated objectively and there must be strict conditions for relocation. New churches must meet safety standards and be located on streets that allow the rapid entry of fire trucks or ambulances in the event of fire,” he told Al-Monitor.

He added, “The state is aware of the difficult conditions that Copts have faced in establishing their churches. But ever since President Abdel Fattah al-Sisi took power [in 2014], his top priority has been to consecrate the principle of citizenship. He issued instructions that new housing projects must include places of worship.”

Zakher went on, “Wherever there is a large population of Copts, a church must be built. But we do not build churches for luxury purposes. The Egyptian government has recently recognized a large number of churches. It also granted approvals to build new churches.”

In 2016, Sisi signed a new law regulating the construction and renovation of churches. The following year, the Egyptian government formed a committee to review applications for official status.

Said Sadek, a professor of political sociology at the American University in Cairo, told Al-Monitor, “Many churches are built without planning in crowded areas. Some of these churches were initially built as houses since it was difficult to obtain licenses for building churches.”

He added, “The Egyptian government should oversee churches and set safety standards for them, just like in any other facility where citizens are likely to gather. Supervision of safety conditions inside churches should not be limited to Egyptian church leaderships — the state must protect its citizens everywhere.”