The Russian war on Ukraine has affected Egypt's economy in many ways and is now affecting Egyptians' ability to keep their pets at home. 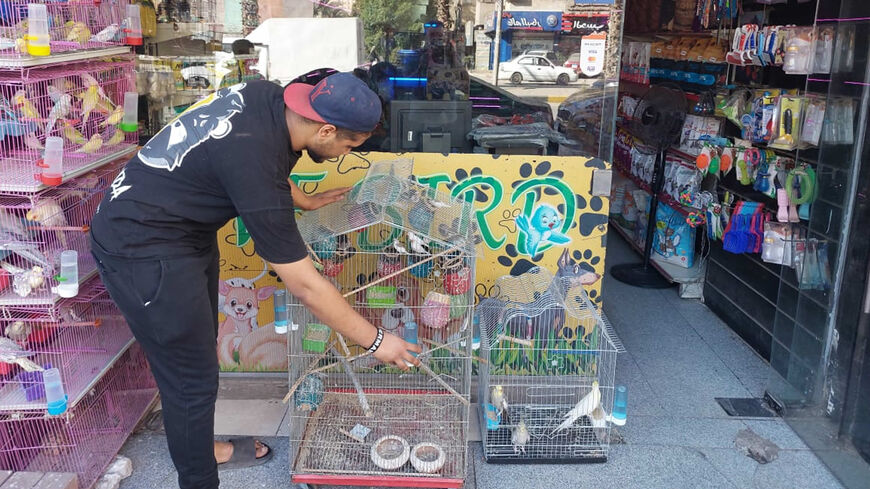 CAIRO — Of the six Arabian Mau cats Sherin Mohamed used to own a few months ago, only one remains. She had to give the other five — a mother and four kittens — up for adoption, which wasn't easy as few people were looking to adopt cats.

She posted the photos of the felines several times on Facebook, offering them up for adoption, before she finally received a message from someone who agreed to adopt them.

"It had become a heavy financial burden to keep the six animals with me," Mohamed told Al-Monitor. "I had to find a solution so that I can keep going [financially]."

Pet ownership and breeding have been on the rise in Egypt for some time, a trend fueled by a number of social and cultural transformations in the populous Arab country.

These transformations have been coupled with growing awareness about animal rights, one that finds its roots in the emergence of a large number of animal rights and rescue groups.

However, the same trend is being curtailed by the tough economic conditions the country experiences at present.

Egypt has been hit hard by the Russian war on Ukraine, an international development that has caused a heavy toll on the economy of the African country.

The war, which compounds effects on the Egyptian economy from the coronavirus pandemic, has caused commodity prices, especially those of food, to shoot up, making it hard for tens of millions of people to make ends meet.

Due to the rising food prices, pet owners and lovers are facing a tough choice: to eat or feed the pets.

Some pet owners are forced to sell their pets, give them up for adoption or even throw them out on the streets, stoking the problem of animal homelessness in Egypt.

Lubna Helmi, head of the Animal Protection Foundation, a Cairo-based nonprofit that works to improve the lives of animals, has been trying, together with her team, to cope with the number of homeless pets.

"People are throwing their pets out on the streets," Helmi told Al-Monitor. "This phenomenon has been on the rise since the outbreak of the coronavirus pandemic."

Animal Protection Foundation volunteers try to offer help by providing food, medical treatment and shelter to the animals they find on the streets.

This is why a pet lover came forward a few days ago to implore people not to adopt or buy animals if they are not sure that they would be able to provide them with a permanent shelter.

"When you throw out the animals after keeping them at home for some time, they die, because they cannot adapt to life on the streets," the woman said in the video.

The rise of food prices in Egypt has coincided with a similar rise in the cost of pet breeding and the prices of animal care requirements.

Egypt has imposed a series of restrictions on the import of a wide range of commodities to put the brakes on the drain of its foreign currency reserves. This came as the Arab country lost a sizeable portion of its income from the tourism sector because of the war in Ukraine.

Egypt also sought to set the few dollars it has aside for the import of basic commodities, including food for its people, most importantly wheat.

Having lost Russia and Ukraine as prime suppliers of wheat, Egypt, among the world's largest importers of this cereal, has turned to other suppliers, paying more for the same quantities of imported wheat.

Nevertheless, the same restrictions made imported pet food disappear from the shelves of pet food shops.

Locally-made items took the stead of imported ones, but the local alternatives are inferior in quality, pet owners say.

To get over this problem, she imports food for her Shih Tzu and Golden Retriever online through an international shopping site.

"But this too is becoming very costly because the prices have already risen dramatically," Nagui said.

Mohamed has overcome the problem of the rise in pet food prices by sharing her food with her Arabian Mau.

"The problem is that some types of human food cause the cat to vomit," she said. "This is why I am usually careful about what I give him."

Nonetheless, she finds the rise in the price of medicines, vaccines and care requirements insurmountable.

Veterinarian Youssef Hendi has seen cases of pet owners intentionally missing out on important vaccines and medical procedures because of the rise in prices.

"Most of the vaccines are imported from other countries and their prices have risen by at least 25%," Hendi told Al-Monitor. "The prices of medical procedures have also risen, especially if the surgeon carrying them out depends on imported medicines or if more than one surgeon is involved in the procedure."

Most vets have already raised their fees, making it even harder for pet owners to visit their clinics.

Safwat has already stopped buying new pets due to the bleak conditions of the market. However, some of the pet owners have asked him to keep their pets at the shop until a buyer is found.

He does this for a 20% commission, in addition to the price of the food he offers the pets until they are sold.

"The problem is that I cannot keep the pets for long in my shop because food is becoming very expensive," Safwat told Al-Monitor. "I keep the animals for a week at most and return them to their owners if they are not sold, which happens in most cases."