As they were in ancient times, Egypt's cats today are still being worshipped — this time in organized beauty contests. 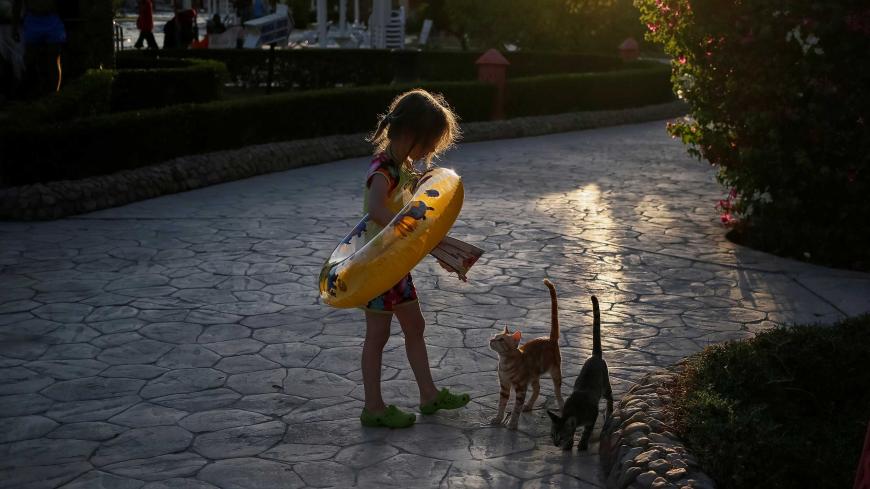 A tourist plays with cats in the Red Sea resort of Hurghada, Egypt, Aug. 16, 2016. - REUTERS/Gleb Garanich

From carvings of cats on temples to worshipping Bastet, the cat goddess, it is easy to tell that ancient Egyptians held cats in high esteem. Various drawings from the period depict how cats joined ancient Egyptians on their hunting trips and show cats adorned with jewels. Egyptians also mummified cats after death like they did humans. Undeterred by economic difficulties, some 21st-century Egyptians retain this ancient affinity for cats, showing off their rare felines at cat clubs and beauty contests.

Nagla el-Masry’s love of cats has moved beyond being an obsession. It has now become a profession. The young Egyptian, who studied hospitality management at the London College UCK and returned home in 2009, organized the first cat beauty contest in Egypt in 2011.

“Cats are my life,” she told Al-Monitor. “At a certain period in my life, they provided me with a sort of compensation for not having children,” adding that her love for the animals did not diminish after she had kids.

Masry said, “Once I settled in Egypt, I decided to organize cat shows and focus on raising awareness of the importance of registering cat breeds by urging people to recognize and register the breed of their cats with international platforms that would help them know how to take care of their cats according to the breed.”

In 2010, Masry founded the Egypt Cat Club (ECC) to provide helpful answers to countless inquiries related to how to care for cats and kittens.

“The ECC is affiliated with a Ukrainian organization — the International Cat Fanciers' Association, Inc., Rolandus Union International [ICFA RUI, Ukraine],” Masry said. “The club is also responsible for organizing shows and beauty pageants. These events aim to boost pet culture in Egyptian society and change the impression that Egyptians are animal abusers.”

Egyptians have come under criticism for a few episodes of cruelty to animals in the last few years. In 2014, photographs of a mass poisoning of cats at Cairo's Gezira Club circulated, sending shock waves through social media. A year later, a video went viral showing three men torturing, beating and slaughtering Max, commonly known as Dog al-Ahram. The three men stabbed the dog, sparking public outrage.

Masry's most recent beauty contest, held Oct. 28, featured 38 cats of different breeds competing against each other. Being held for the fourth time, the contest included a Persian, a sleek Siamese and, for the first time, a Bengal cat. While the cats’ heads, legs, tails, eyes, fur and paws were evaluated aesthetically, their behavior and the way they interacted with humans were also graded by jurors.

Within a few hours the contest went viral, with a torrent of comments flooding social media and eliciting mixed reactions. Some lauded the competition, while others made sarcastic comments or disparaged it as a waste of money. One person remarked that the cats “ate better than homeless people on Egypt's streets.” A Mina Soliman commented, “There are some crazy people who … do not care for the cancer patients and for orphans or the people in the street who eat garbage [but] spend 16 thousand pounds on a cat.”

“My team and I turn a deaf ear to such negative comments,” Masry said. “Some media outlets also fabricated news about the cats' prices and the show's cost, further triggering public controversy. All religions are against animal cruelty and among good deeds include having mercy on animals.” Masry added that she spares no effort in helping needy people as well as animals.

Despite Egypt's economic hardships, the market for pets is growing. According to a recent report by the Central Agency for Public Mobilization and Statistics, Egyptians spent $52.4 million on pet food over the course of four months in 2016.

“I bought this cat from a Ukrainian friend of mine two years ago for approximately 5,000 pounds [$282],” Adel told Al-Monitor. “I stick to a daily routine to keep my cats healthy. Besides Essi, I have three other cats.”

Adel said she feeds Essi fresh and dried food to make sure she gets the required nutrients. She also bathes her on a weekly basis with a shampoo that prevents her fur from tangling and helps her shed loose hair.

Asked about her average budget for raising a cat, Adel said each of her cats needs 3-4 kilos (roughly 6.5-9 pounds) of dry food monthly, in addition to fresh food, medical checkups and sand for the litter box.

“Now, the price of a kilo of dry food is around 140-160 Egyptian pounds [$8-9]. All in all, the cats' requirements might cost me 3,500 pounds [$198] every month,” she said. “I know that some people may think spending such an amount of money on cats is a luxury, but I can afford to feed a cat and donate money to charity at the same time.”

Masry plans to organize a cat contest and show in March 2018. “I want to organize this event twice a year,” she said. “I am optimistic because each cat show draws more people.”