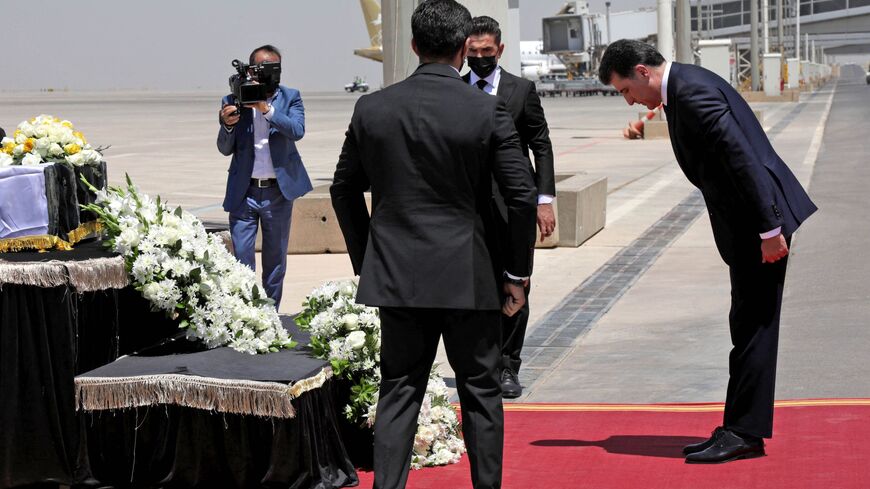 President of the Kurdistan Region in Iraq Nechirvan Barzani (R) pays tribute in front of the casket of one of the victims killed a day earlier in a Kurdish hill village in an attack blamed on Turkey, before the bodies are flown to their cities from the airport in Erbil, the capital of Iraq's northern Kurdish autonomous region, on July 21, 2022. - SAFIN HAMED/AFP via Getty Images

Angry reactions to the deaths of nine Iraqi civilians in an artillery strike blamed on Turkey continued to spread across Iraq yesterday, as the bodies of the victims were flown to Baghdad where they were received by Mustafa al-Kadhimi, the country's prime minister. Kadhimi declared a national day of mourning, and the country’s Ministerial Council on National Security demanded that Turkey formally apologize and withdraw all of its forces from Iraq.

Iraq said it would be taking its case to the UN Security Council, even as Turkey denied involvement in the artillery attack on a tourist resort in Iraqi Kurdistan’s Dahuk region and called for a joint investigation. Victims included a 1-year-old girl and a newly married man who had traveled there with his bride for their honeymoon.

The Council on National Security told the Foreign Ministry to recall its charge d’affaires in Ankara for consultations and to hold off sending a new ambassador.

Several Iraqi tourism companies said they were launching a boycott on Turkey, while the Iraqi government advised its citizens not to travel there. Protests continued outside the Turkish visa center in Baghdad today following demonstrations in the Shiite holy cities of Najaf and Karbala and in the southern city of Nasiriyah the night before.

Turkey’s Foreign Minister Mevlut Cavusoglu kept up the denials today, saying that Iraqi authorities must not fall for “this trap.” Turkey blamed the attack on a terrorist group without naming it. It was likely referring to the Kurdistan Workers Party (PKK). The rebel group has been waging a 38-year-long insurgency inside Turkey, but its forces are concentrated in Iraqi Kurdistan, where Turkey is currently targeting them in a wide-scale air and land offensive and has set up a string of military bases.

The massacre has dealt a blow to Ankara’s recent charm offensive aimed at rebuilding ties with Arab nations and Israel and there are no signs that its rebuttal has altered the mood.

In a statement, the Arab League stressed "full rejection of the Turkish aggression on Iraqi sovereignty, which represents a clear violation of international law, and a flagrant violation of the principles of good neighborliness."

"Ankara has to reconsider its positions and maintain the principle of good neighborliness in its relations with the countries of the region, and refrain from carrying out military operations inside the territories of Arab countries under any pretext," the pan-Arab body added.

The State Department and various EU governments joined in the flood of condemnations over the deaths of the tourists, which were mostly women and children holidaying in Barakh, a riverside hill resort that is within range of Turkish bases scattered across the region.

Senior Iraqi officials speaking on background to Al-Monitor said initial investigations revealed there was no doubt that the attack had originated from a Turkish base. They gave no further details.

A demonstration in Iraq's #Nenawa against #Turkish exisit in #Iraq pic.twitter.com/9fNh9HrROj

Foreign journalists were invited by the Kurdistan Regional Government (KRG) to view the site of the carnage on a trip scheduled to take place Friday, a further sign that it’s not going to seek to bury the tragedy as its top regional ally, Turkey, is surely hoping it would.

Nechirvan Barzani, president of the Kurdistan Region of Iraq, was present at Erbil airport today to see off the coffins of the slain tourists. Barzani is known to have very close ties to Turkey’s President Recep Tayyip Erdogan and is the architect of a 2013 energy deal between Ankara and the KRG that allows the Kurdish region to export its oil via Turkish export terminals independently of Baghdad.

The show of solidarity with Baghdad at the risk of angering Ankara comes as Iraqi courts turn the screws on the KRG’s energy deals with international oil companies, declaring them unconstitutional and prompting several of them to pull out of the Kurdish region.

The temptation to leverage the tragedy for domestic political purposes can be detected in the actions of Muqtada al-Sadr. The influential Shiite cleric, whose withdrawal from the Iraqi parliament has further complicated efforts to form a government some nine months after parliamentary elections were held, is spearheading the campaign against Ankara.

“The killing of the Iraqi vacationers refocused Iraqi public opinion on the fact that Turkey has been occupying parts of northern Iraq for years. The protests in front of Turkish consulates and the embassy in Baghdad and calls to boycott Turkish goods are a manifestation of this anger,” said Elizabeth Tsurkov, an expert on the Levant and a doctoral student at Princeton University. Tsurkov has spent extended time in Syria, Turkey and Iraq.

“What is interesting to observe is that this anger has unified civil society activists, leftists, supporters of Sadr and his rivals, and pro-Iranian militias. Sadr can burnish his nationalist reputation by showing he opposes all foreign intervention in Iraq, not just the Iranians and Americans,” Tsurkov told Al-Monitor.

“Meanwhile, pro-Iranian accounts on social media are calling for a boycott of Turkish goods, which would obviously benefit both the Iranian-backed militias in charge of the cross-border smuggling from Iran and Iran itself, which is struggling to compete in the Iraqi market,” she said.

Rasha al-Aqeedi, an Iraqi analyst and deputy Middle East editor at the New Lines Magazine, noted that multiple civilians have died in Turkish airstrikes in Iraqi Kurdistan and Yazidi-dominated Sinjar over the years, but that there has been little reaction when “Kurds or Yazidis die.”

However, the attack on the tourist resort “touched Iraqis in a human way” because, she said, it was a clear-cut attack on civilians at a well-known tourist retreat. Besides, the victims were all Arabs who had sought refuge from the misery of daily power cuts amid boiling temperatures in the rest of Iraq, only to face death, sparking “rare national outrage.”

Aqeedi warned that the massacre could further inflame Sunni-Shiite tensions with Sunni Arabs widely perceived as allied with Turkey — “the country that did this to us.”

The risk is surely on Khadimi’s mind, given the sectarian and ethnic flash points brought out by the attack. Turkey is closest to the Sunni Arabs and Barzani’s Kurdistan Democratic Party (KDP), the largest ruling party in the KRG. The Sunni parties and the KDP aligned with Sadr’s party after the October 2021 elections.

As such, Turkey “badly miscalculated,” Aqeedi said. “Continuing to deny responsibility is not helping their cause,” she added.

Imad al-Badran, an Iraqi academic at Basra University, says that there is also a growing perception that Turkey is seeking to occupy and annex oil rich parts of northern Iraq. He was referencing claims within certain Turkish nationalist circles that Mosul, previously controlled by the Ottomans, belongs to Turkey. "I think there are Sunni Arabs who are backing [these] claims over the western regions of Iraq and Mosul, since Erdogan's religious rhetoric is consistent with the aspirations of the Sunnis," he told Al-Monitor. "They want to support Turkey against Iranian aspiration and influence, and this is what Turkish intelligence is working on, exploiting the sentiments of the Sunnis and playing the sectarian card," Badran added.

Turkey’s record does little to help its case. In 2011 Turkish warplanes killed 34 Kurdish civilians, mostly teenagers, who were smuggling gasoline and cigarettes near Turkey’s mountainous border with Iraq. The Turkish air force said in a statement that the group were thought to be PKK rebels. Subsequent investigations led to no prosecutions. The affair was buried, and relatives of the victims were prosecuted instead on charges of making PKK propaganda.

Turkey likely believes it can ride out this maelstrom as well, not least because it enjoys considerable leverage over Iraq through water. The Euphrates and Tigris rivers on which drought-stricken Iraq heavily depends rise in Turkey.

Turkey’s construction of a series of dams blamed for water scarcity in Iraq has been a thorn in relations for more than five decades. Iraq on Saturday asked Ankara to increase the flow of water downstream and an Iraqi technical delegation was expected to visit Turkey to evaluate Turkish dam reserves on site, the Iraqi government said following talks with Turkey’s special envoy for Iraq, Veysel Eroglu. The UN classifies Iraq as the world’s fifth most vulnerable country in the world to climate change.

On Tuesday, Turkey’s ambassador to Iraq, Ali Riza Guney, further angered Baghdad when he accused Iraqis via Twitter of “squandering water sources” and called for “immediate measures to reduce the waste."

“Iraq’s hands are tied and there is little that the international community can do to stop Turkey from building dams,” Aqeedi observed. “And Erdogan knows this.”

Correction: July 22, 2022. An earlier version of this article identified Rasha al-Aqeedi as deputy Middle East editor at the Newlines Institute; rather she is with New Lines Magazine.