The attack, which Turkey denied in a statement, came a day after Turkish President Recep Tayyip Erdogan met with Iranian Supreme Leader Ayatollah Ali Khamenei in Tehran to win Tehran's backing for a further invasion into northeastern Syria. 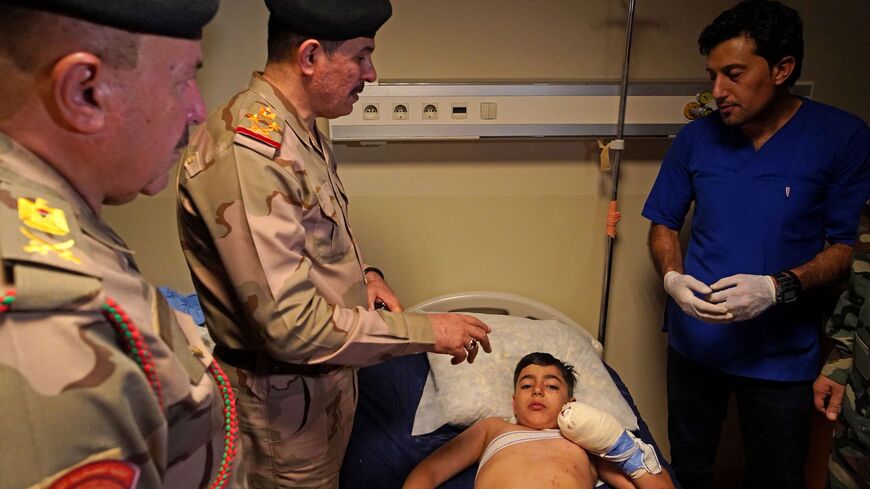 Gen. Mohammed al-Bayati, secretary of the Iraqi prime minister, visits those injured by Turkish shelling at a hospital in the city of Zakho in the north of Iraq's autonomous Kurdish region on July 20, 2022. Nine civilians, including children, were killed in a park in Iraq's autonomous Kurdistan Region by artillery fire that Baghdad blamed on neighboring Turkey. - ISMAEL ADNAN/AFP via Getty Images

At least nine Iraqi civilians were killed and dozens wounded in artillery strikes on a tourist resort in the Kurdistan Region today, which the Iraqi government blamed on Turkish forces.

Noting that most of the victims were women and children, Iraq’s Prime Minister Mustafa al-Kadhimi said in a statement that Turkish forces had “committed an explicit and blatant violation of Iraqi citizens by targeting a tourist resort in the governorate of Dahuk in the Kurdistan Region of Iraq today.” Kadhimi said the Arab tourists had died as a result of artillery strikes.

The statement, one of the toughest of its kind, said that Iraq rejected the use of “security justifications by any party to threaten the lives of Iraqi citizens” and reserved “its full right to respond to these attacks.”

Kadhimi convened an emergency meeting late Wednesday of the Ministerial Council for National Security. The council tasked the Foreign Ministry with preparing a report on “the repeated Turkish attacks on Iraqi sovereignty and security” and to then submit an official complaint to the UN Security Council. The council also decided to pause efforts to send a new ambassador to Turkey, while summoning the Turkish ambassador in Baghdad.

Footage from the scene showed bloodied men, women and children shrieking in terror as grey plumes of smoke rose around them. “Kadhimi, where are you? Where is your country?” a man shouted as a woman in white jeans collapsed to the ground. The wounded were ferried to nearby hospitals in pickup trucks.

Thousands of Iraqis flock to the region to escape scorching summer temperatures further south, but the area is peppered with Turkish bases used in the military’s ongoing offensive against rebels of the Kurdistan Workers Party (PKK)).

In Najaf, where the tourist group was reportedly from, an office issuing Turkish visas was forced to shut down after being mobbed by enraged protestors.

Turkey denied responsibility in a late-afternoon statement condoling “friendly and brotherly Iraqi people” for their loss and suggested that the attack was carried out by a “terrorist group.”

The statement did not identify the group. It noted that Turkey was ready to cooperate with Iraqi authorities to find the “real culprits” and invited Iraqi government officials “not to make statements under the influence of treacherous terror groups.”

An official delegation led by Iraqi Foreign Minister Fuad Hussain was dispatched to Zakho to investigate, but there was no word of any cooperation with Ankara.

A senior Iraqi Kurdish source speaking not for attribution told Al-Monitor that Turkey was responsible for the attack. However, Prime Minister of the Kurdistan Regional Government Masrour Barzani stopped short of blaming Turkey in a late night statement on the deaths.

Wednesday’s carnage came a day after Turkey’s President Recep Tayyip Erdogan met with Iran’s Supreme Leader Ayatollah Ali Khamenei in Tehran to win his backing for a further invasion into northeastern Syria against US-backed forces, which Turkey accuses of links to the PKK.

Khamenei refused, at least publicly, to give his blessings to Turkey’s long-heralded plans to expand its occupation of northeastern Syria, saying this would only “benefit terrorists,” a reference to Sunni rebels, including assorted jihadis, seeking to overthrow Syria’s President Bashar al-Assad.

Powerful Shiite cleric Muqtada al-Sadr was among the first to denounce the attack, suggesting that Iraq suspend diplomatic ties with Ankara. The Kurdistan Regional Government, Ankara’s top ally in the Levant, issued a milder statement condemning the attack and attributing it to Turkey. The United Nations chimed in without explicitly referencing Turkey.

Turkey has sharply escalated operations against the rebels this year, using fighter jets, attack helicopters to cut off their supply lines and armed drones to target their senior leaders.

There is no precise death toll, but hundreds of civilians have perished and thousands have been displaced since Turkey began launching full-scale cross-border attacks against the PKK in the early 1990s. Iran carries out strikes against its own Kurdish rebels sheltering in Iraqi Kurdistan, and Baghdad remains powerless to stop either country from encroaching on its territory.

The political landscape has shifted in recent years as Turkey finds itself increasingly at odds with Iran and its Shiite proxies in Iraq. The militia are targeting Turkish troops in Bashiqa and pushing back against Turkish moves to drive out PKK-linked Yazidi groups from Sinjar, a strategic region straddling Iraq, Syria and Turkey. At the same time, Iran and its local proxies have increased attacks on the Iraqi Kurds’ energy infrastructure, in turn impacting Turkey, which is the sole export route for Iraqi Kurdish oil.

The rivalry is also playing out in Baghdad between Turkish-backed Sunni Arab groups allied with the most powerful Iraqi Kurdish group — the Kurdistan Democratic Party (KDP) — and assorted Shiite factions.

Efforts to stitch together a new Iraqi government some nine months after parliamentary elections took place have yet to yield results, and Sadr’s withdrawal from Iraq's parliament has thrown a further wrench. Analysts say today’s attack will give the Shiite bloc further ammunition against the Sunnis and that Sadr’s swift response is proof of this.

“This is very embarrassing for the Barzanis and the Sunnis,” said Bilal Wahab, a senior fellow at The Washington Institute for Near East Policy. Wahab was referring to Iraqi Kurdistan’s influential Barzani tribe, which leads the KDP and has very close ties with Ankara.

“It’s also a boon to some of the Shiite militias that have been attacking Turkey. It bolsters their street cred,” Wahab told Al-Monitor. “It’s in Iran’s interests to see Turkey vulnerable in Iraq.”

Either way, the tragedy once again highlights the mounting toll of Turkey’s refusal to address Kurdish grievances through dialogue instead of military measures, which has not only alienated its own Kurds but millions of others across its borders and is earning it fresh enemies among Arabs too.

“The Turkish government’s insistence on a violent solution to the Kurdish question and increasing cross-border military operations is not only destroying civilian life and infrastructure in the Kurdish Region but also destabilizing the wider region,” said Giran Ozcan, executive director of the Kurdish Peace Institute, a Washington-based research organization.

A political solution to the Kurdish question will not only go a long way in stabilizing Turkey, Syria and Iraq, but may even solve a crucial sticking point in Turkey’s problematic relationship with NATO and the West in general,” Ozcan told Al-Monitor.

That was certainly Erdogan’s approach when he first rose to power in 2002 and introduced a blitz of reforms aimed at winning membership into the European Union. These included holding Turkey’s first-ever direct negotiations with the PKK and its imprisoned leader, Abdullah Ocalan.

The talks broke down in 2015 along with a two-and-a-half-year cease-fire, which many hoped were paving the way to lasting peace. Seven years on, Erdogan has embraced the same brutally assimilationist tactics deployed by his predecessors — those of seeking to stamp out the Kurds’ unrelenting fight for equal political and cultural rights.