Ankara continues to deny responsibility for shelling that killed tourists in Iraqi Kurdistan. 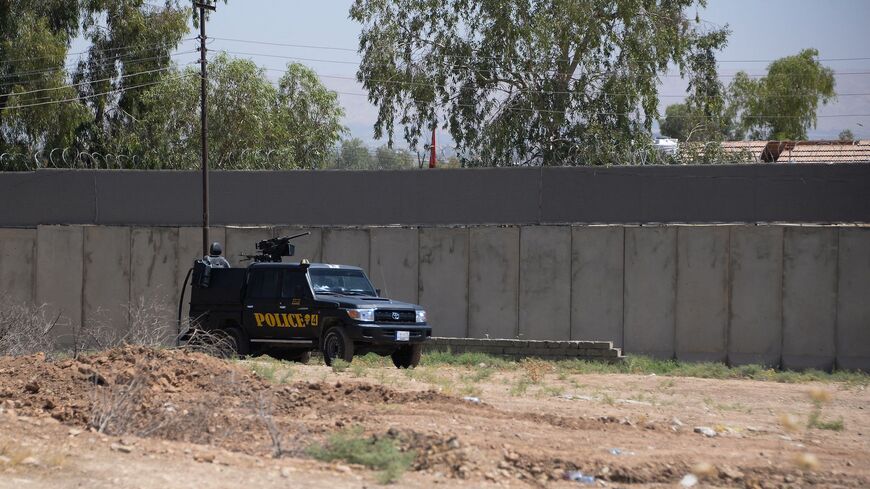 An Iraqi police vehicle secures the area of the Turkish Consulate in the northern Iraqi city of Mosul on July 27, 2022. Rocket fire targeted the surroundings of the consulate, a security source told AFP, causing material damage in the area. - ZAID AL-OBEIDI/AFP via Getty Images

Tensions between Ankara and Baghdad over the massacre of nine tourists in Iraq’s Kurdistan Region showed no signs of abating, as Iraq’s foreign minister blasted Turkey at an emergency session of the United Nations Security Council Tuesday and Iran-backed militias mounted a rocket attack against the Turkish consulate in Mosul, the latest such aggression against Turkish assets in Iraq.

But even as their envoys traded accusations, behind closed doors the parties were maneuvering to leverage the tragedy to their respective benefits, well-placed sources speaking anonymously to Al-Monitor confirmed.

In New York, Iraq’s top diplomat Fuad Hussein accused Turkey of “blatant aggression” against “innocent civilians and property” and called on “occupying” Turkish forces to withdraw from Iraq under UN supervision, labeling their presence in the country “illegal.”

Hussein said Turkey’s claims that its forces were pursuing militants of the outlawed Kurdistan Workers Party (PKK) in the area were “baseless.” Turkey was exporting its own internal problems to Iraq “at the expense of Iraq.” Hussain was alluding to Turkey’s 38-year-long battle against the PKK, which is now being waged principally in Iraq where the bulk of rebel forces and their commanders are based. Turkey must pay compensation to the victims, Hussain said, recalling that Turkey had been responsible for numerous civilian deaths in the past, including “a crime against humanity committed by the Turkish army in broad daylight.”

Ankara denies responsibility for the deaths of the tourists on July 20 at Barakh, a resort in Iraqi Kurdistan that lies close to Turkey and several Turkish bases on both sides of the border.

Iraq says the victims, including a 1-year-old girl, died as a result of artillery fired from inside Turkey. Hussein told the council that an investigation team dispatched to the site collected fragments of weapons that were determined to be of the type used by Turkish forces operating against the PKK in the region. Hussein led the mission that traveled to Barakh on the day of the attack.

Turkey is calling for a joint investigation to “unveil the truth.” Its deputy ambassador to the UN, Oncu Keceli, said that "the sovereignty and territorial integrity of Iraq [was] breached by a terrorist organization, not by Turkey." The Turkish Embassy in Baghdad blamed the attack on the PKK.

Sources with knowledge of official thinking in Baghdad suggested that hard-liners in the Iraqi government were seizing on the massacre to pressure Turkey to withdraw several thousand troops stationed at Bashiqa, a strategic outpost east of Mosul.

In other words, if Turkey agrees to leave Bashiqa, Iraq will dial down its campaign against Turkey. This might explain why despite its rhetorical salvos, Iraqi authorities have yet to display the evidence they say they have in their possession before the public, the sources speculated.

Turkish troops moved into Bashiqa, notionally to train Iraqi Sunni forces in their battle against the Islamic State (IS). However, their presence was viewed with suspicion from the outset and has fueled claims that Turkey wants to retake energy-rich lands that used to be part of the Ottoman Empire.

Bashiqa is the only Turkish base outside Iraqi Kurdistan, and with the battle against IS over, it has outlived its declared purpose, Iraqi officials say. Iran is unhappy about the Turkish presence as well, and the base has come under attack from suspected Shiite militias, most recently on Sunday. Tuesday’s attack on the Turkish Consulate in Mosul did not result in any casualties, the Turkish Foreign Ministry said.

Iraq doesn’t have the power to forcibly eject either Turkish troops or the PKK from its soil. And chances that the UN would back Iraq’s call for a resolution demanding a Turkish withdrawal appear slim if not hopeless.

Baghdad does, however, hold one relatively strong card. Turkey faces a $24 billion fine in an arbitration case lodged by Iraq in an international court over Ankara’s role in helping the Kurdistan Regional Government (KRG) in Iraq export its oil independently from Baghdad via a purpose-built pipeline since 2014. The court is due to deliver its verdict within two months, and the consensus is that Turkey will lose the case.

On Feb. 15, Iraq's Federal Supreme Court struck a huge blow to the KRG’s energy sector and, by extension, to Turkey when it ruled that the 2007 oil and gas law governing the country’s Kurdistan Region was unconstitutional. Several international energy companies have since announced their departure from Iraqi Kurdistan, and more are likely to follow when the International Chamber of Commerce announces its opinion.

Revenues from crude sales via export terminals at Turkey’s southern Mediterranean port of Ceyhan are the KRG’s principal source of revenue. For Turkey, a $24 billion penalty could not come at a worse time as its economy is seized by its deepest crisis in two decades.

Masrour Barzani traveled to Baghdad on July 24 where he met with Iraqi Prime Minister Mustafa al-Kadhimi to discuss the numerous disputes between the two sides, but above all to seek respite on energy. The sources said that Barzani had requested Kadhimi help delay action on the Supreme Court ruling and arbitration case until a new government is formed in Baghdad and a new law on oil and gas is passed.

That could take a while. The main blocs in parliament have yet to agree on a government some nine months after parliamentary elections were held.

Influential Shiite cleric Muqtada al-Sadr has made things even harder by withdrawing his followers from parliament. Today his supporters stormed the Iraqi legislature, sowing further chaos just as the candidate of the largest Shiite bloc, Mohammed Shia al-Sudani, was expected to be asked to form the new government in the coming days.

Sadr was also at the vanguard of protests that erupted in the wake of the deaths at Barakh.

The sources said Kadhimi had agreed to Barzani’s request on the arbitration case but had demurred on the Supreme Court ruling, saying there was nothing he could do. He did, however, advise Barzani to press the KRG's case for international oil companies to continue their activities in Kurdistan with the administrative courts that adjudicate commercial affairs.

A delay in the international court's verdict would be difficult to engineer. All of the hearings have already been held and documents filed.

The only alternative would be for Iraq to renounce its claim, which is highly unlikely given the leverage a positive ruling will afford it in its future dealings with international oil companies and the KRG. But then today’s mayhem may provide Kadhimi with fresh opportunities to hold on to his seat.

The KRG’s desire to make nice with Baghdad is evident in its unusually stout stance on Turkey. Barzani put his name to a statement issued after his meeting with the Iraqi leader in which the two sides “strongly condemned Turkish aggression.” Hussein, the foreign minister, is a Kurd and a trusted lieutenant of Barzani’s father, Massoud, the most influential Kurdish leader in all of Iraq. It seems inconceivable that Hussein would use such harsh language against Ankara without Barzani’ blessings. Cynics contend it has more to do with the Barzanis' alleged ambitions to replace Barham Saleh as president of Iraq with their own candidate.

In the meantime, Turkey must be calculating that it can ride out this storm as it has its litany of misdeeds in Iraq and neighboring Syria. Ankara remains secure in the knowledge that it has control over the Euphrates and Tigris rivers that rise in Turkey and are the main source of irrigation for drought-stricken Iraq. In a further display of impunity, Turkey resumed shelling areas around Barakh. But for how long? Families of the victims may never get an answer.