Iraq’s major political actors have all condemned Turkey over a deadly attack on a tourist site in what many believe signal a major downturn in bilateral ties. 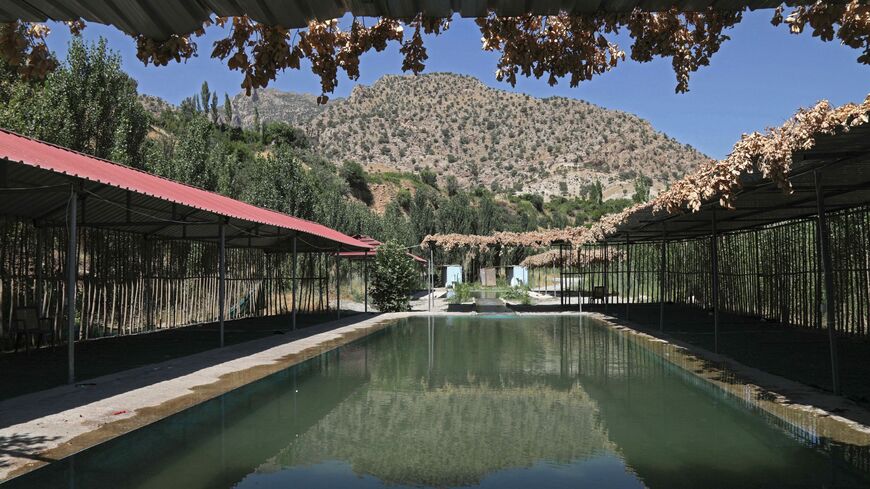 A picture shows a view of an Iraqi mountain village that was hit with artillery in the Zakho district village of Parakh in the north of Iraq's autonomous Kurdish region on July 22, 2022. - SAFIN HAMED/AFP via Getty Images

Turkey’s long pursuit of Kurdish militants on Iraqi territory has finally struck its ties with Baghdad and Erbil like a meteor, forcing the Iraqi Kurdish administration to openly confront Ankara after years of tiptoeing on the Turkish operations at the expense of fanning intra-Kurdish rows for years.

A July 20 artillery strike blamed on Turkey killed nine Iraqi vacationers and wounded more than 20 others in Parakh, a hill village near the Turkish border in Dahuk province in Iraqi Kurdistan. Indignation has swept Kurdish, Sunni and Shiite political actors that Ankara sees as close to itself. In a remarkably harsh reaction, Shiite leader Muqtada al-Sadr urged Iraq to downgrade relations and cancel all security agreements with Turkey, halt air and land traffic between the two countries.

Turkey has for decades pursued the outlawed Kurdistan Workers Party (PKK) on Iraqi territory along the border, but its campaign has ballooned with its series of "Claw" operations since 2019. The PKK, which Ankara designates as a terrorist group, took up arms in southeastern Turkey in 1984 and has long used the rugged mountains of Iraqi Kurdistan as a rear base.

Immediately after the attack, Prime Minister Mustafa al-Kadhimi dispatched Foreign Minister Fuad Hussein and other officials to Parakh, while Turkey denied responsibility for the mayhem, blaming it on the PKK. A Foreign Ministry statement signaled Ankara’s willingness for a joint probe into the incident and urged Iraqi leaders “not to make statements under the influence of [PKK] propaganda.”

Commenting on the findings at the site, Hussein said, “The weapon used was a 155mm artillery shell. Four shells were fired at the site. The first shell was fired and half an hour later the other three were fired. … The parts that fell into the hands of military experts were brought to Baghdad and examined, so the number, location, and type of weapon are all known.”

In Iraq Kurdistan, Turkey was openly condemned on behalf of the regional government, which has been on good terms with Ankara. Though President Nechirvan Barzani and Prime Minister Masrour Barzani’s first statements denouncing the attack stopped short of mentioning a perpetrator, a joint statement on July 23 issued after a meeting between al-Kadhimi and Masrour Barzani openly and strongly condemned “the Turkish aggressions on Iraqi territory, especially the recent attack that claimed the lives of many innocent citizens.”

The statement also “stressed the importance of a unified vision to deal with the attack and investigate its circumstances in a way that fortifies Iraq's sovereignty and prevents violating it in the future.”

After an emergency meeting late on July 20, Iraq’s National Security Council called for “all necessary steps for self-defense” at the border and directed the Foreign Ministry to demand an apology from Ankara and the withdrawal of Turkish forces from Iraq, summon the Turkish ambassador for an official protest, recall the Iraqi chargé d'affairs from Ankara for consultations, suspend the appointment of a new ambassador to Turkey and submit a complaint to the UN.

Protests were staged outside Turkey’s embassy in Baghdad and visa centers in other cities while rockets and drones targeted two Turkish military bases in Nineveh and Dahuk. The concrete blocks erected around the embassy came as a vivid sign of a new era in bilateral ties.

Despite Ankara’s denials, the Iraqi Parliament held a special session July 23 to discuss the Turkish military presence in the country and the latest incident. A Defense Ministry report submitted to the legislature said the attack was carried out with a 155 mm howitzer from a location controlled by the Turkish military on the Turkish side of the border. According to the report, Turkey has set up more than 100 military bases and outposts on Iraqi territory, extending to a depth of 105 kilometers (65 miles) from the border, and keeps over 4,000 troops inside Iraq, along with tanks, armored vehicles, helicopters and heavy weapons. The parliament also heard that 22,700 Turkish violations of Iraqi sovereignty had been recorded since 2018.

According to an Iraqi official, the findings indicate that a Turkish-made T-155 Panter howitzer was used in the July 20 attack.

Unlike other deadly incidents in the past, the victims were declared martyrs this time, meaning their families will receive compensation.

Responding to calls for the cancellation of security deals with Turkey, Hussein said no such agreement existed at present. A 1984 protocol that allowed Turkish troops to pursue militants to a depth of five kilometers (three miles) inside Iraq and required them to pull out within 72 hours ended in 1988, when the two sides failed to renew it. Such an arrangement would have become irrelevant anyway, given the extensive web of Turkish military bases, outposts and checkpoints inside Iraq today as well as repeated air raids as far as in Sinjar and Mahkmour, lying respectively 160 kilometers (99 miles) and 218 kilometers (135 miles) from the border. Ankara has cited the UN Charter’s Article 51 on self-defense to justify its cross-border operations since 2017.

There is growing apprehension that Turkey’s actions amount to an expanding occupation. Statements coming from Ankara have not helped allay such fears. Presidential adviser Ayhan Ogan, for instance, warned July 21 that “if Turkey’s security concerns are ignored and, moreover, provoked, Turkey would create a new security belt all the way from Aleppo to Mosul.” Such a perspective points to an integrated approach on Ankara’s plan for a 30-kilometer-deep safe zone in northern Syria and its actions in northern Iraq.

Talking heads close to the Turkish government have speculated that the July 20 attack might have been plotted by Iran in a bid to sabotage Turkish plans for a fresh military operation in Syria or by the United States in response to Turkey joining Iran and Russia in a call for US withdrawal from Syria at last week’s trilateral summit in Tehran.

Yet Turkey’s operations in Iraq have continued for years and claimed civilian lives before. The casualties were largely met with silence since they were mostly local villagers, while the latest victims were tourists from other parts of Iraq.

Al-Monitor spoke to Kurdish sources from Erbil and Sulaimaniyah whose comments and observations could be summarized as follows:

All the villages around Parakh have been abandoned because of the Turkish operations, with out of 11 villages in the region only Parakh remaining populated, the Community Peacemaker Teams, a human rights group based in the United States and Iraqi Kurdistan, confirmed to Al-Monitor. Turkish military operations in Iraqi Kurdistan have resulted in 138 civilian deaths since August 2015, in addition to economic damage, including farmland devastated by fires, according to the CPT. More than 600 villages have been evacuated over the years. Many Kurds have come to share concerns that the expansion of Turkey’s operations could be ultimately aimed at undermining the autonomous status of Iraqi Kurdistan.

Sunni Arab leaders such as Khamis Khanjar and Atheel al-Nujaifi sought to defend Turkey after the attack, but such efforts might only rekindle tensions along the Sunni-Shiite fault line.

Iraq’s political instability, Baghdad’s weakness and bilateral economic ties have long subdued the Iraqi response to Turkey’s actions. Senior officials have now begun to echo concerns that Turkey has exported its PKK problem to Iraq and is using it to expand its military presence in the country. Hussein publicly questioned Turkey’s intentions, saying, “They often say that they are after the PKK … but we see that the fighting has expanded. We see that the places they target are not the places of the PKK.” The hardening of the Iraqi diplomatic tone bodes a new, toxic chapter in bilateral ties, with Turkey looming as a major issue in Iraqi politics.