In landmark talks in Baghdad, Hakan Fidan sought to ease bilateral tensions over a deadly attack in July, assert Turkey’s resolve to continue military operations on Iraqi soil and sway the political impasse in Iraq. 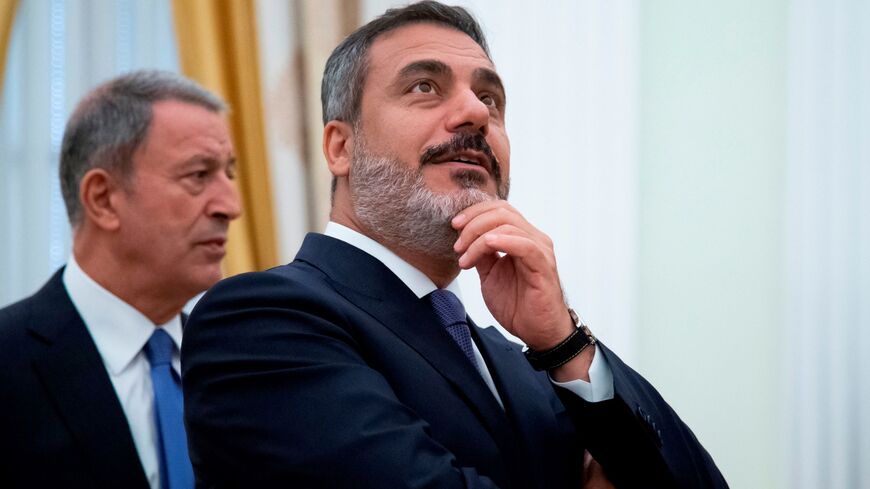 Turkish intelligence chief Hakan Fidan (R) and Turkish Defense Minister Hulusi Akar wait prior to a meeting at the Kremlin in Moscow on Aug. 24, 2018. - ALEXANDER ZEMLIANICHENKO/AFP via Getty Images

Turkey’s intelligence chief Hakan Fidan became the country’s first official to hold high-level talks in Baghdad after bilateral tensions shot up in July. While Fidan’s visit was aimed at soothing the tensions, it was also a Turkish attempt to exert influence in the Iraqi political crisis.

Tensions spiked over a bloody attack on Parakh, a tourist retreat in Iraqi Kurdistan, that Iraqi leaders blamed on the Turkish military. The July 20 artillery strike killed nine civilians and injured more than 30 others, sparking anger against Turkey across the Iraqi political spectrum. In a remarkably stern reaction, Shiite leader Muqtada al-Sadr — a key actor in the government crisis in Iraq — called for canceling all security arrangements with Turkey, halting air and land traffic between the two countries and taking action against Turkey at the United Nations.

The massacre came amid growing Iraqi apprehension over Turkey’s long-standing pursuit of the outlawed Kurdistan Workers Party (PKK) on Iraqi territory, which has significantly expanded in the past several years.

In Baghdad, Fidan met with President Barham Saleh, Prime Minister Mustafa al-Kadhimi and Parliament Speaker Mohammad al-Halbousi. He emphasized Turkey’s commitment to Iraq’s territorial integrity, but asserted that Turkish cross-border operations would continue as long as the PKK maintains its presence on Iraqi territory, according to the Iraqi Kurdish media. The PKK, which Ankara designates as a terrorist group, has long used the rugged mountains of Iraqi Kurdistan as a rear base.

Fidan said Turkey was ready to set up a joint commission to investigate the Parakh massacre, for which Ankara has denied responsibility.

According to an Iraqi Defense Ministry presentation in parliament days after the massacre, Turkey has set up more than 100 military bases and outposts on Iraqi territory, extending 105 kilometers (65 miles) from the border, and deployed over 4,000 troops inside Iraq, along with tanks, helicopters and heavy weapons.

In a speech in August, President Recep Tayyip Erdogan seemed to confirm Ankara’s intention to expand its bases and maintain permanent control on Iraqi territory. Linking his plan for a safe zone in Syria to Iraq, Erdogan vowed  to “secure [Turkey’s] southern borders from end to end with a corridor extending to a depth of 30 kilometers (19 miles).”

According to sources close to the PKK, Fidan’s visit to Iraq was aimed at courting support for an escalated military campaign in the fall because Turkey has failed to achieve its objectives in the border areas of Zap, Metina and Avashin, home to long-standing PKK camps.

Fidan’s talks with Sunni leaders also stood out during his visit. Apart from Halbousi, who heads the Taqqadoum party, Fidan met with Khamis al-Khanjar, the leader of the Azm movement, reiterating Ankara’s advice that Sunnis should unite in the government formation process. On the Shiite side, he met with Faleh al-Fayyad, the chief of the Popular Mobilization Units (PMU), according to Shafaq News.

During the meetings Fidan reportedly discussed Turkey’s operations against the PKK, the issue of water-sharing pertaining to the transboundary Euphrates and Tigris rivers and the possibility of Turkey providing military equipment to Iraq and helping to overcome the political crisis in the country.

Judging by photos from Fidan’s Sept. 10 meeting with Khanjar, Turkey’s ambassador to Iraq, Ali Riza Guney, did not accompany the intelligence chief in his talks in Baghdad. Contacted by Al-Monitor, Guney declined to share details, citing the level and sensitive nature of the visit.

Fidan’s role in Turkey’s foreign ties has increased in recent years, especially on security-related issues. His meeting with Khanjar speaks of Turkish intelligence’s involvement in political matters as well. His contacts in Iraq, Syria and Libya evoke the role that Qasem Soleimani, the slain leader of Iran’s Quds Force, played in Tehran’s foreign affairs.

His visit to Baghdad should be seen both as an effort to readjust bilateral ties after the Parakh massacre and an attempt to influence the government-formation crisis in Iraq.

In February, Fidan helped bring the feuding Halbousi and Khanjar to Istanbul for talks with Erdogan. The Sovereignty Alliance, formed by the groups of the two Sunni leaders, and the Kurdistan Democratic Party (KDP) had joined Sadr’s quest to form a majority government, which fueled Shiite divisions and pitted Turkey against Iran in the political stalemate plaguing Iraq since October 2021.

Amid the Turkish-Iranian influence rivalry in Iraq, Sadr came off as a lesser evil for Ankara against the Coordination Framework, a bloc of pro-Iranian Shiite groups. Yet Sadr’s harsh reaction to the Parakh massacre might have prompted Ankara to review its bets.

Having failed to set up a government, Sadr called on the Sovereignty Alliance and the KDP for collaboration to dissolve parliament to force early elections. His former partners, however, were reluctant to heed his call, cracking the door open to the Coordination Framework. Since their decisions coincided with Fidan’s visit, some have speculated that Turkish influence was at play.

The rising anti-Turkish sentiment among Shiite parties weakens Ankara’s capacity to influence Iraqi politics. If Fidan indeed sought to clear the way for a new government, the Coordination Framework would have been pleased. Yet his meeting with Khanjar, in particular, seems to have caused irritation in the Shiite bloc.

Shiite perceptions of Turkey turned largely negative in the upheaval that led to the Islamic State’s capture of Mosul in 2014. And with the Sunni political scene turning upside down in the process, Ankara’s channels of influence in Iraq collapsed. It was in this atmosphere that Khanjar and Halbousi came to the fore. While both leaders value Ankara, they have built close ties with the Gulf and shown that they keep their ears open to signals from Tehran. So Turkey is now trying to reopen its channels of influence and needs to do more for dialogue with the Shiites.

With things slipping out of control in Baghdad, a new understanding is apparently emerging between Ankara and Tehran. Some observers opine that Ankara could bring the Sunnis closer to the Coordination Framework, and a third option might be to reappoint Kadhimi as prime minister to lead the country to elections.

More specifically, Turkey hopes that the Sovereignty Alliance would receive the defense minister’s portfolio. Such a gain for the Sunnis, Ankara reckons, would help curb PMU-affiliated elements which have vocally objected to Turkey’s cross-border operations and frequently fired rockets at the Turkish base in Bashiqa near Mosul.

Following Fidan’s visit, Halbousi and Khanjar traveled to Iraqi Kurdistan for talks with KDP leader Masoud Barzani on Sept. 11. The parties stressed the need for constructive dialogue to resolve the political impasse before holding early elections.

According to Kurdish sources, neither the KDP nor the Sovereignty Alliance accept the Coordination Framework’s prime minister nominee, Mohammed Shia al-Sudani. Moreover, the KDP retains its reservation against Saleh, who has been renominated as president by the Patriotic Union of Kurdistan (PUK), the KDP’s main rival in Iraqi Kurdistan. Some believe the KDP might give the nod to another PUK nominee to untangle the knot. Power-sharing arrangements in the Iraqi constitution require the president to be a Kurd, the prime minister a Shiite and the parliament speaker a Sunni.

The parties in the Coordination Framework, for their part, remain divided on whether Kadhimi and Saleh should keep their posts until elections.