Research based on complaints to the UN Security Council reveals an intrusive and constant Israeli presence over Lebanese airspace, with consequences for public health. 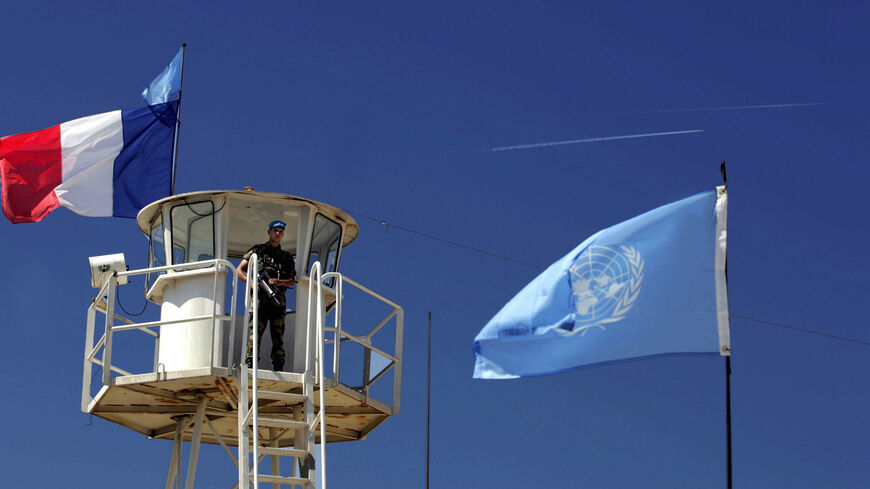 A French soldier with the UNIFIL stands guard at a watchtower as two Israeli warplanes fly over the southern Lebanese village of al-Tiri, Sept. 27, 2006. - HASSAN AMMAR/AFP via Getty Images

Lebanese citizens have become accustomets to foreign aircraft -- especially warplanes from Israel. New research has shown that over the past 15 years alone, at least 22,000 Israeli overflights have been documented over Lebanese airspace. The website Airpressure.info shows many details regarding these flights — for example, type of aircraft, duration of the flight, routes.

Based on 243 letters from 2006 to 2021 addressed by Lebanon to the UN Security Council, Beirut-based investigator Lawrence Abu Hamdan launched this investigation supported by the research project ARS Art-Research-Sound from the Johannes Gutenberg University Mainz. Abu Hamdan put together all the information from these letters in order to show a very alarming pattern. “When I found that, I felt that this data needed to be seen and done in a place where it was interactive and searchable, where patterns could be understood,” he told Al-Monitor.

“We have come to accept this as part of our everyday reality, but we are not really asking many questions about it,” he added.

Lebanese society has gotten used to hearing Israeli jets and surveillance drones circulating over their heads. But this new research comes to show the disturbing and traumatizing Israeli presence in Lebanese skies and its consequences on their lives. “It certainly does intimidate people. It reminds them of a continual possibility of aerial bombardment, and this is something very difficult to live with,” explained Abu Hamdan.

Those 22,000 flights act as a constant reminder that war is never over and of the threat of violence, which is already part of the country’s collective psychology. The warplanes usually fly at low altitudes that cause alarm and panic and lead to collective psychological effects.

For some who live in Lebanon, the constant air pressure and noise from above harm their physical and psychological well-being, creating fear and disturbing sleep and rest patterns.

Hartmut Ising, from the Federal Environment Agency of Germany, did the first major study into the health effects of fighter jet noise. Its results can apply to the Lebanese population. “The noise of low-flying combat aircraft causes blood pressure increases, which may constitute a health risk,” Ising said in his paper "Acute circulatory effects of military low-altitude flight noise" co-authored by researchers Ran Michalak and Ekkehard Rebentisch. They also proved how the effects of noise on humans increase with longer exposure time.

Other studies have shown the “acute effects of noise from low-flying aircraft on cardiovascular functions and hearing ability” and the “potential risks of long-term exposure to low-altitude flight,” Many people in the world have been impacted by the exposure of military aircraft noise and suffer “both physical and mental effects, especially perceived psychological disorders, as a result" of it — including increased blood pressure. Al-Monitor tried to contact the Lebanese Ministry of Health to discuss these effects but got no response.

Maps of the Israeli flight routes in Lebanon show that despite the concentration of aircrafts in the south and around Beirut, they fly all over the country. On average, they would spend more than four and a half hours circling the skies.

Israeli-Canadian journalist Anna Ahronheim, based in Tel Aviv, has been writing for years about the Israeli military and its defense strategies. “Israel has various interests to carry out these flights. The first one is to gather intelligence on Hezbollah and on its position in guided missiles, and the second one is to fire missiles to Syria from the Lebanese airspace,” she told Al-Monitor. Surprisingly, only two out of the 22,111 incursions included entrance to Syrian airspace. “Of course this is something that violates Lebanese sovereignty in their skies, but Israel deems it necessary for its deterrence,” Ahronheim added.

Both Ahronheim and Abu Hamdan agree on the intimidatory component of these flights. “Israel hasn’t gone to war with Hezbollah in a long time because Israel has been sending a message to Hezbollah and, at the same time, terrifying the Lebanese citizens, warning them they should not support going to war,” she said.

“The number of planes exceeds surveillance, so they are doing it clearly with an intimidation purpose,” the Beirut-based investigator explained.

According to this research, every year for the past 15 years 1,474 Israeli flights have occurred over Lebanese airspace. Abu Hamdan denounces not only “the serious violations in the airspace but in people’s privacy with mass indiscriminate surveillance.”

Data over the years have shown an increase of flights by 10% during the summer in a country such as Lebanon whose economy depends on tourism. “The area of photography during summer is the worst in the year, so the noise in the atmosphere is part of this strategy to weaken Lebanon economically,” Abu Hamdan told Al-Monitor.

But the 243 letters from the representative of Lebanon to the UN over 15 years have not encouraged the international community to act on these violations. “Unfortunately, this is not surprising,” said Ahronheim. “At the end of the day, the UN is not doing much. The Security Council speaks to Israel regarding these [Lebanese] complaints, but Israel also accuses Hezbollah of surveilling them.”

“Feeling that the sky is against you affects people negatively because that’s the place usually associated as the limit,” said Abu Hamdan. The investigator can’t help but to collectivize these feelings. “In a place already so congested on the ground such as Lebanon, to even feel that there is nowhere to escape from above … would lead to a feeling of general trauma.”