The Hezbollah unmanned aerial vehicle that infiltrated Israeli airspace last week and then returned to Lebanon worries the IDF. 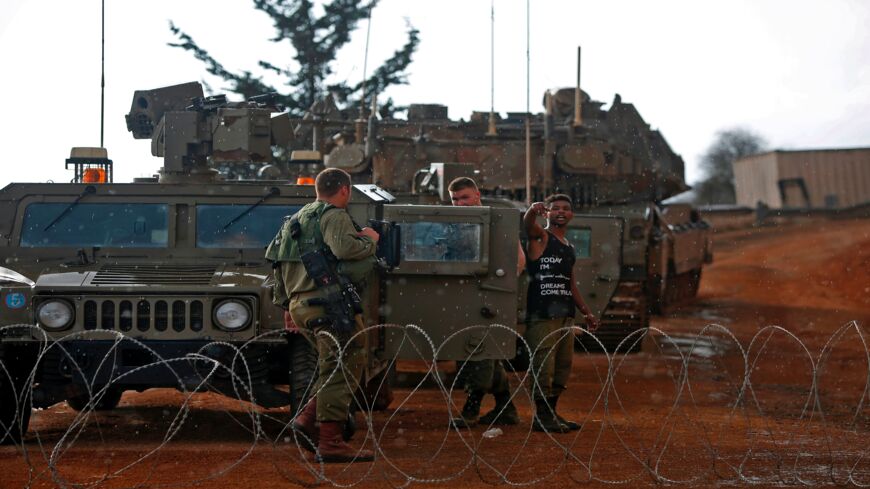 Israeli soldiers are pictured stationed near the northern Israeli border with Lebanon, Nov. 11, 2020. The Israeli military the previous day said it shot down a drone belonging to Lebanon's Hezbollah that entered Israeli airspace. - JALAA MAREY/AFP via Getty Images

The infiltration of a Hezbollah aircraft into Israeli sovereign airspace Feb. 18 and its return to Lebanon unharmed caused only psychological/public opinion damage to Israel. But it may be that the incident attests to a more serious problem, which is the Israel Defense Force’s (IDF) limited capacity to address the growing threat of unmanned aircraft on that front.

The drone that was sent to Israel last Friday was not especially large, and the route its operators chose — close to the ground — reportedly made it very difficult to locate and take down. Nonetheless, IDF systems managed to identify its approach to Israeli territory and track its flight, at least at the initial stage. When the identification was ascertained, Israeli security forces decided to deploy all possible means to take it down: electronic weapons, fighter planes and an Iron Dome interceptor. To great Israeli disappointment, the drone managed to evade all these means, and after a flight of about a quarter of an hour in Israeli airspace, it returned unharmed to its operators.

Since an interceptor missile was fired, Israel decided to sound two alarms in its north on Friday afternoon in order to allow residents to protect themselves from the shards of the interceptor that scattered all over. Panicked citizens ran to shelters; immediately after the interception attempt, the military systems lost touch with the drone.  After a few hours, it was verified that it was not intercepted.

Israel believes that Hezbollah’s decision to launch the small craft on Friday was a message to Israel and an attempt to embarrass it after a day earlier, on Thursday, the IDF took down a Hezbollah multirotor drone that was launched toward Israel. It was downed by what are called “soft measures” — that is, electronic weapons.

On Friday those electronic weapons failed, as did air force fighter planes and the Iron Dome anti-missile defense system. As in every failure, the IDF is conducting an in-depth investigation, but the acute criticism in Israel isn’t only at the technical aspects of the failure to take down the aircraft, but also at the overall response — especially the decision to sound the two alarms on Friday afternoon and send thousands of citizens to shelters because of a small and harmless aircraft that entered Israeli airspace. Many in the security forces believe that the decision to sound the alarms gave Hezbollah a psychological victory and unjustifiably allowed the group to upend the daily life of Israeli citizens.

In recent years Hezbollah has made a big leap in the use of multirotor drones after years of fighting shoulder to shoulder with the Russian army in the Syrian civil war. The estimate is that the organization has dozens of unmanned aircraft of various types and sizes, if not more, whose purpose is intelligence collection or just purposeful provocation of Israel. Significantly, such an aircraft could be used as a precision weapon if it is loaded with explosives.

The great advantage of these aircraft, with their various sizes and purposes, is that they are relatively simple to operate, not very expensive and easy to move from place to place. Not only this, they have a significant operational advantage because they have a low radar signature and are very hard to locate.

The Israeli response came a few hours after the infiltration of the aircraft into Israeli territory. Several Israeli air force F-16 planes were sighted in the skies of Beirut, flying low and creating supersonic booms. Videos of the fighter planes were published in the media and posted on social media as psychological warfare.

Israel’s relatively feeble response attests to the complicated situation between Israel and Hezbollah. If it had been an aircraft that entered from Syria or Gaza, the Israeli response may have been more aggressive, but since Israel is also deterred by Hezbollah, Jerusalem made do with merely a display of force.

As far as is known, Iran was not involved in the incident between Israel and Hezbollah over the past weekend, but Israel has reiterated that Tehran is the source of all evil, including in the field of unmanned aircraft — it is responsible for research and development, and it disseminates information as well as the crafts themselves.

As we know, Iran has given its supporters in Yemen and Iraq advanced unmanned aircraft that can fly hundreds and thousands of kilometers. These aircraft have been deployed in action against targets in Saudi Arabia, Abu Dhabi and even against American forces in Iraq, which causes great concern for Israel and other nations in the region.

In recent months senior Israeli officials have publicly expressed concerns that these Iranian unmanned attack aircraft could reach Israeli territory, and Jerusalem assumes that Iran or its proxies will attempt to penetrate Israel airspace by means of these crafts. The estimate is that in light of its success last weekend, Hezbollah will continue to try to challenge the IDF.

The fact that this time Israeli showed low operational capabilities and did not succeed in intercepting the small aircraft that entered its territory last Friday greatly damages its deterrence toward the terror organization in the north, but more gravely toward other sources of terror in the region and foremost among them Iran. Thus, aside from a thorough operational investigation of the failure to intercept the aircraft that entered Israel over the weekend, Israel will have to formulate its policy before the next incident that will cross its red lines, which will undoubtedly occur. It’s not at all clear that a display of force over the skies of Beirut is the right response to achieve this goal of maintaining Israeli deterrence.