The Houthis said they wrecked two US drones over Yemen's contested Marib province. 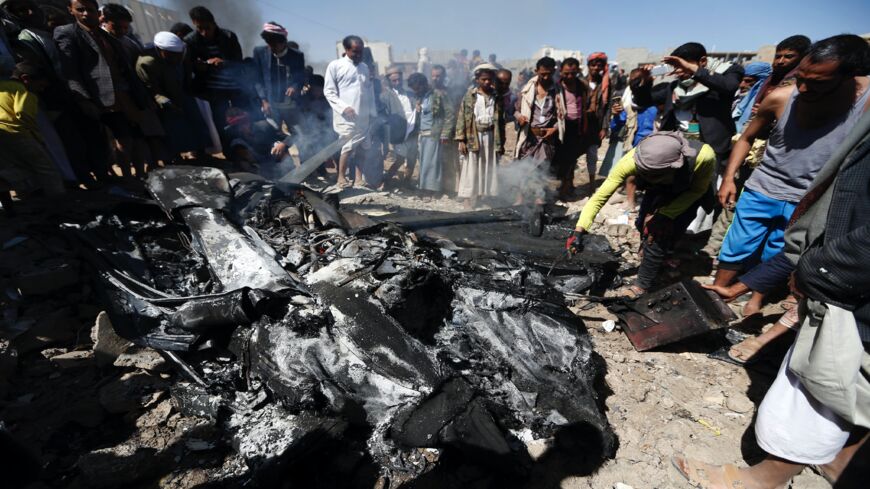 Yemenis inspect the burning wreckage of a drone in the country's capital, Sanaa, on Oct. 1, 2017. A drone crashed at the northern exit of the Yemeni capital without causing casualties, and the Houthi rebels claimed it had been shot down by their anti-aircraft defense. - MOHAMMED HUWAIS/AFP via Getty Images

The US military disavowed two drones reportedly shot down by Yemen’s Houthi rebels near the contested city of Marib over the weekend, saying it had lost no such unmanned aircraft recently in the region.

Houthi media on Wednesday released footage purporting to show two US-made drones shot down over the central Yemeni province, where Saudi-backed government forces are holding off an unrelenting offensive by the rebels.

One of the destroyed Scan Eagle drones in the footage bore markings identifying its manufacturer as Insitu, a subsidiary of Boeing based in Washington state, according to The Associated Press, which first reported on the shoot-down.

US Central Command spokesperson Lt. Col. Karen Roxberry told AP there were “no downed CENTCOM assets” in the Middle East and the US military is “not flying over Marib.”

News of the shoot-down comes two days after the Justice Department took down a host of Iran-linked websites, including the pro-Houthi Al-Masirah outlet.

Shortly after taking office, President Joe Biden ordered a halt to all US support for the Saudi-led coalition’s offensive operations in Yemen, with the exception of maintenance support for the Royal Saudi Air Force and intelligence and surveillance support to help Saudi Arabia defend against Houthi missile launches.

The head of US forces in the Middle East, Gen. Kenneth “Frank” McKenzie, told Al-Monitor in April the US military is not participating in the defense of Marib from the Houthi offensive.

“We’re not doing anything in terms of ISR (intelligence, surveillance and reconnaissance) … on things happening in Marib or places like that,” McKenzie said.

It remains unclear to which government or organization the drones belonged, though the CIA has conducted drone operations in Yemen in the past.

The Houthis have claimed in recent years to have shot down a handful of US-made drones over Yemen, including one with Saudi markings last year.

The rebels also brought down two US military MQ-9 Reapers in the summer of 2019 and another Scan Eagle in November of that year. The roughly $3 million Scan Eagle is a low-altitude surveillance drone with more than 20 hours of flight time.

The Houthis’ main backer, Iran, also shot down a US RQ-4 Global Hawk surveillance drone near the Strait of Hormuz in 2019 amid peak tensions between the two countries. Iran said the drone entered airspace over its territory. The United States confirmed the shoot-down and said the drone had been operating in international airspace.

In 2012, Iran claimed to have captured a US Scan Eagle drone with plans to reverse engineer it. The US Navy at the time denied it had lost any such aircraft.