Houthis tout missiles that down advanced US drones

Yemen’s Houthi rebels recently downed a US drone and promised to do the same to any others that leave al-Qaeda areas. 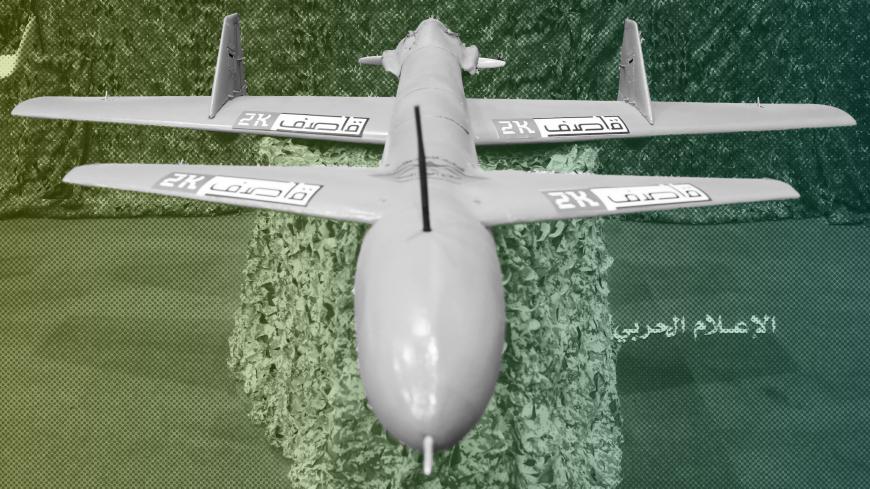 BEIRUT — Yemen's Houthi rebels appear to be growing stronger by the day, shifting from conventional weaponry and guerrilla warfare to upgraded weapons and organized tactics. Whether these weapons were created locally, as the Houthis claim, or smuggled from Iran or even purchased on the sprawling black market in the Red Sea region, the Houthis have used them effectively.

As groups that were recently allied against the Houthis are now fighting each other for control of Yemen's temporary capital of Aden in the southwest, the Houthis claim to have used surface-to-air missiles to shoot down US drones in other areas.

“An MQ-9 Reaper was shot down [Aug. 20] in Dhamar province … by a locally developed missile that hit its target with high precision," Houthi spokesman Brig.-Gen. Yahya Sarih announced Aug. 21.

US Central Command responded quickly, stating, “We are investigating reports of an attack by Iranian-backed Houthis forces on a US [drone] in authorized airspace over Yemen,” and that Iran's support of the Houthis “poses a serious threat to stability in the region and our partners.”

At an Aug. 24 press conference, Sarih outlined the Houthis’ military capabilities, saying they have two air defense systems, the Fater-1 and the Thaqib-1. He said the systems are locally made and have been in service since 2017. But Jane's Defence Weekly said the Fater-1 resembles systems of Soviet origin that Yemen may have purchased years ago. The weapons publication speculates Iran has helped upgrade them based on the altitude the missiles achieve. According to Southfront, the Houthis probably obtained the Fater-1 system "from the stockpiles of the former Yemeni Air Defense Force."

In addition to the drone downed last week, the Houthis also claim to have shot down an MQ-9 Reaper in June 7 in Hodeidah and two US MQ-1 Predator drones in Sanaa on May 14 and March 22.

The MQ-9 Reaper is a state-of-the-art, unmanned fighter aircraft with advanced capabilities.

A spokesman for the Houthi Air Force and Air Defense, Brig.-Gen. Abdullah al-Jafri, told Al-Monitor, “All US aircraft will meet the same fate and be shot down as they penetrate the sky and sovereignty of Yemen in direct aggression by collecting intelligence and coordinates.”

He predicted that the United States would not respond, citing the US president's last-minute cancellation of an airstrike against Iran after it shot down a US drone in June. Washington did, however, retaliate with a cyberstrike.

The Yemeni-US Convention on Combating Terrorism grants US aircraft the right to fly over Yemeni territory and target al-Qaeda. But Jafri said, “This agreement does not concern the Houthis."

Meanwhile, public anger is growing against the US use of drones, as there have been many civilian casualties when the weapons miss their al-Qaeda targets. This discontent is reflected in the public's praise every time a US aircraft is shot down.

However, Yemeni author and military analyst Ali al-Dahab pointed out, “The Houthis’ power in air defense is still minimal, as it has yet to make a major difference in the war. The aircraft of the Saudi-led coalition are still bombing Yemen and leaving without a scratch, except for the drones the coalition uses for limited military objectives such as reconnaissance and surveillance.”

He told Al-Monitor, “The MQ-9 Reaper was shot down in Dhamar because it was flying outside the range where al-Qaeda affiliates were present in al-Bayda province. The same goes for the one dropped in Hodeidah.”

Dahab added, “Such aircraft usually fly slightly higher than the range of conventional Houthi anti-aircraft weapons, but they were able to target them using their newly acquired advanced surface-to-air missiles, which may be Iranian made or obtained from a third country via Iran.”

By shooting down drones, the Houthis are telling their supporters as well as their enemies that from now on, they will deal with aerial threats militarily.

Meanwhile, civilians are the biggest losers in these battles. An expert in terrorist organizations in the Arabian Peninsula told Al-Monitor on condition of anonymity that the aircraft often miss their targets, striking civilians.

It seems unlikely that US drone missions will be affected in areas where al-Qaeda is present, because the Houthis see the group as an enemy and they may cooperate with Washington to eliminate it. The Houthis fought al-Qaeda in al-Bayda province in 2014 on the ground as US drones bombed the base from the air. However, the Houthis have made it clear that should US drones targeting al-Qaeda ever change course, they will be shot down.