The global rise in prices of flour and other products havs affected the cost of bread in Israel, some of which has long been regulated. 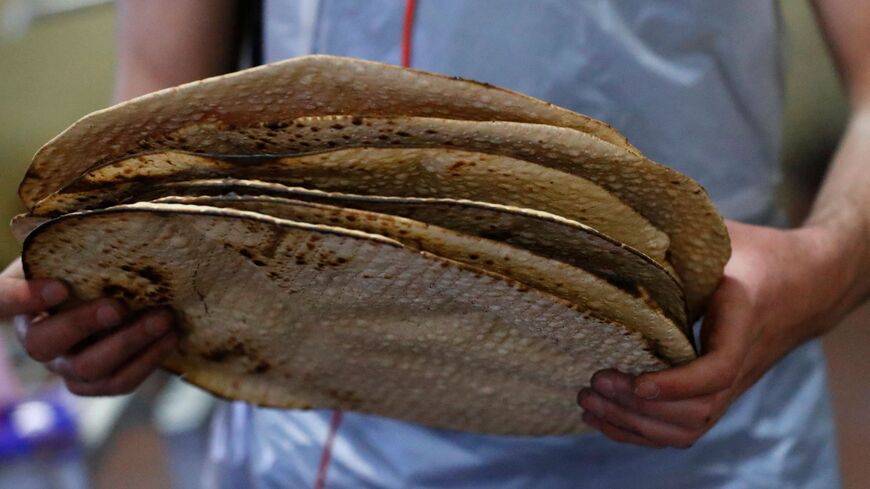 An ultra-Orthodox Jewish man works at a bakery in Kfar Habad near Tel Aviv March 25, 2018. - JACK GUEZ/AFP via Getty Images

Israel deems several types of bread to be basic commodities and fixes their prices so that even the poorest families can afford them. The products include white and whole wheat bread as well the traditional challah bread.

Prime Minister Yair Lapid and Economy Minister Orna Barbivai announced July 25 that the prices of these regulated breads would be moderately increased. They explained that the government had reached an agreement with Israel's major bakeries to increase the prices significantly less than the bakeries wished. In exchange, the government agreed to lift price control measures by the end of April 2023.

The news came on the backdrop of rising inflation in Israel over the past few months. Israeli consumers experienced significant price hikes in a variety of products including eggs, milk, baby products, electricity and fuel.

Lapid urged his cabinet ministers to come up with a financing plan to battle rising food prices. He himself has been encouraging French food chain Carrefour to set up shop in Israel. On July 24, Lapid said the addition of the chain and its low prices will help calm the climbing costs of living in the country.

Israel's bread-price controls are a long established bipartisan social welfare policy and symbolize the government's commitment to the poor. When production costs increase, bakers are forced to enter into negotiations with the government for authorization to increase prices.

With the Russian invasion and global shortage of wheat, the production cost of bread has gone up in Israel substantially. While Israelis took price hikes in electricity and fuel rather quietly, raising the price of bread is a totally different matter.

The issue is especially delicate for the government of Lapid, who entered politics shortly after the 2011 social justice movement against high costs of living. His newly established party Yesh Atid entered the Knesset with an impressive 19 seats.

Itai Ater, an economics professor at the Coller School of Management at Tel Aviv University, explained to Al-Monitor that the price of bread is a touchy symbol for Israelis. The government, he said, "is afraid of being perceived as not addressing this problem," and now it is facing reelection.

On July 14, the committee heard an appeal by the big Israeli bakeries and agreed to increase prices of regulated bread by an average of 20%.

Yaakov Yehezkel is the co-owner of the Maccabim bakery, which supplies bread products to stores and private customers across Israel. In a conversation with Al-Monitor after the July 14 decision, Yehezkel said that a price hike was unavoidable, as over the last three months the prices of flour jumped by close to 40%, mainly because of the war in Ukraine. He noted that while the public debate is focused on regulated bread prices, he expects the prices of other bread products to also increase. It is not just the issue of flour costs, he said, but also others, such as fuel, electricity and raw materials.

Still, acknowledging the sensitivity of the issue, Barbivai asked the major supermarket chains to temporarily maintain the current prices until the government presents a compromise solution, perhaps in the form of a subsidy. The country’s supermarket giants agreed to freeze bread prices for a limited period.

At a special cabinet meeting last week, the ministers discussed various suggestions. Barbivai and Minister of Welfare Meir Cohen recommended restoring bread subsidies, which were stopped in 1990, but their proposal was rejected by the Finance Ministry. Justice Minister Gideon Saar proposed using excess tax revenues to abolish the 17% VAT on bread for a fixed period, as has been done with fuel, to curb price hikes.

However, in the end, the proposal by Agriculture Minister Oded Forer won out. Forer recommended minimizing the hike in exchange for completely removing price controls on bread sometime in the future.

An April 2022 report by the Knesset's Information and Research Department revealed that the total value of bread products sold by retail chains during 2018-2020 came to 1.5 billion shekels per year. The total sales of regulated breads were about 270 million shekels per year, 18% of all sales. The data indicated that in recent years bread consumption patterns have changed, decreasing the market share of regulated breads while the consumption of artisanal breads and other specialty goods increased.

The bread market in Israel includes hundreds of bakeries. Angel Group, Berman Group and Davidovich Group control roughly 80% of the bread market and have subsidiary bakeries scattered all over the country.

From an economic point of view, the government's strenuous efforts to control prices may be more political maneuvering than helpful. According to the April Knesset report, it appears that public expenditures on bread, even among the poor, constitutes a mere 1% of the total annual consumption expenditure.

Ater said that bread price hikes should have little influence on the cost of living, as increase in the costs of fuel, electricity, water and other consumer products are much more significant. The good news, he added, is that there are ways to improve the situation, such as removing import duties or perhaps lowering overly stringent standards for imports.