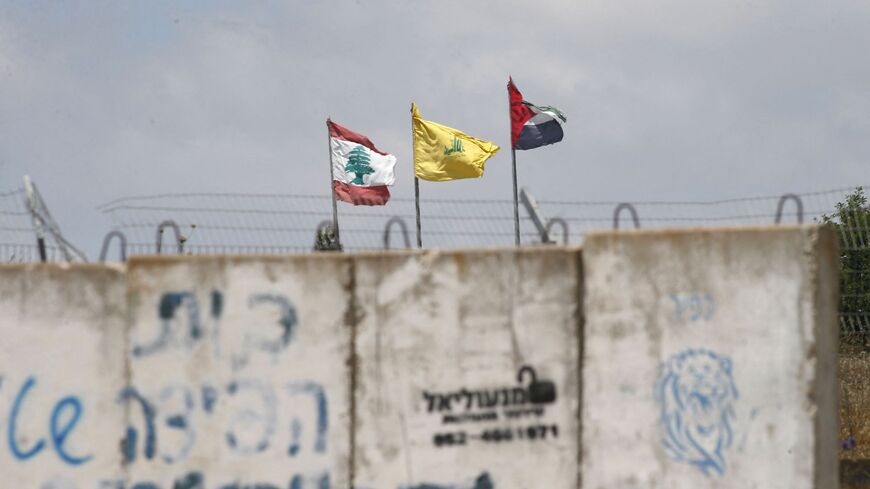 A picture taken on July 3, 2022, from the Israeli Kibbutz of Baram shows the flags of (L to R) Lebanon, Hezbollah and Palestine swaying in the wind on the Lebanese side of the border with Israel. - JALAA MAREY/AFP via Getty Images

Negotiations between Israel and Lebanon, mediated by the United States, over the maritime border between the two countries have made significant progress recently, but there is a catch.

Senior Israeli officials have asked US mediator Amos Hochstein to expedite talks between the two countries before Hezbollah’s provocations result in widespread conflict between the parties. The Israeli security establishment hopes to complete negotiations before September, when natural gas extraction is expected to begin at the Karish gas field in the Mediterranean Sea.

Tensions in the region are intensifying. On July 2, Hezbollah flew three drones toward the Karish gas field. Their target was clearly south of the maritime border between Israel and Lebanon, in Israeli territory. The IDF reported that an air force fighter jet and a navy patrol boat shot down the unmanned aircraft, adding that a fourth drone had been shot down several days earlier. On July 18, the IDF announced that it had shot down a Hezbollah glider that penetrated Israeli airspace.

Israel believes that these drones are part of Hezbollah’s efforts to sabotage its negotiations with Lebanon. As the drones were not armed, it is believed that they were not intended to damage the oil facilities. But since the incident, Nasrallah has warned that his group is planning to attack targets “beyond Karish.”

The IDF intelligence has not ruled out the possibility of further attempts by Hezbollah to launch unmanned aircraft at Israel’s maritime gas fields or take other provocative measures to escalate the situation. Hezbollah’s goal is to depict themselves as posing a threat to Israel.

During the tour, Lapid said, “Israel is prepared and ready to act against any threat. We are not heading into a confrontation, but anyone who tries to harm our sovereignty or the citizens of Israel will very quickly find out that he has made a serious mistake.”

On Monday, Hezbollah demanded sovereignty over the railway tunnel at Rosh HaNikra, on the border between Israel and Lebanon.

This surprising demand first came from Hezbollah’s representative in the Lebanese cabinet, Minister of Public Works Ali Hamia. He demanded that Israel dismantle the cement barrier at its end and cede Rosh HaNikra to Lebanon during a visit to al-Naqura, which is located just a few kilometers from Rosh HaNikra.

The tunnel that Hezbollah demands Israel hand over was first excavated in 1941, before the establishment of the State of Israel. Israel blocked the exit with cement following its withdrawal from southern Lebanon in 2000. Political sources in Beirut opposed to Hezbollah say that the latest demand is deceptive, and that its real intent is to throw a wrench into efforts to delineate Israel’s maritime border with Lebanon.

While Israel seems unconcerned by the Hezbollah minister’s demand, Israeli diplomatic sources say that Israel and Hezbollah are at one of the riskiest junctions in their history and that it could produce the most serious escalation of violence in years. Israeli security forces are preparing for a very tense period along the Lebanese border as negotiators work to finalize the maritime boundary as soon as possible.