Israel hopes that a solution can be found to the maritime border dispute with Lebanon so Energean can start drilling in the Karish field in the third quarter of 2022. 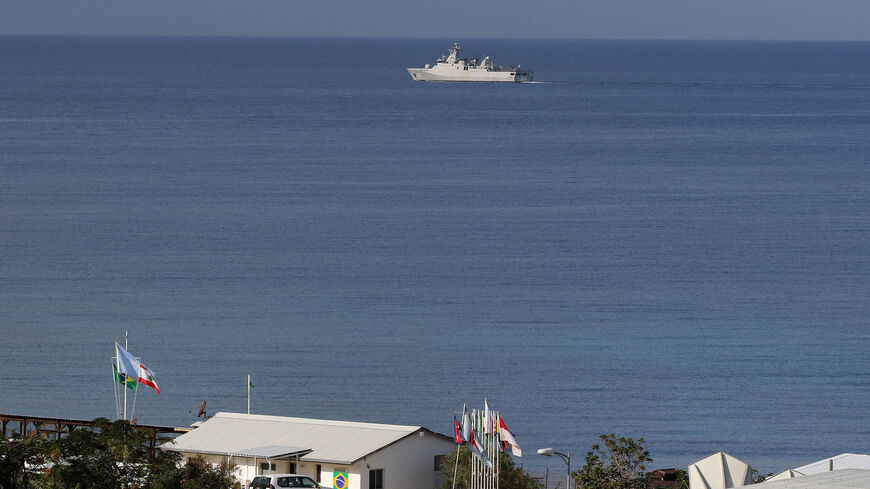 A military vessel of the United Nations peacekeeping force in Lebanon (UNIFIL) is pictured off the coast of the southern Lebanese town of Naqura, on the border with Israel, where delegations from the two countries were meeting, Nov. 11, 2020. - Mahmoud Zayyat/AFP via Getty Images

After five weeks of traveling at sea, the natural gas platform Karish FPSO arrived June 5 at its designated location, off the shores of Israel. Shortly after its arrival, operation teams began connecting the rig to the gas wells and piping networks. The floating platform should serve for production, storage and offloading of drilled natural gas. Energean said the new rig will start operating by September. The new rig was commissioned by the Greek Energean firm, which holds gas production licenses for Israeli Karish and Tanin reservoirs.

Energean CEO Mathios Rigas said after the arrival of the rig, "This marks a major step forward in delivering first gas from Karish. … We look forward to continuing our progress through Karish first gas, the commercialization of the newly defined Olympus Area and contributing to energy security and competition of supply for the region."

Israeli authorities hailed the arrival of the rig, which advances efforts of drilling and exporting Israeli natural gas. In fact, already on May 30, Energy Minister Karine Elharrar tweeted, "We’re embarking on the fourth Israeli natural gas exploration. Israel engages in efforts to assist Europe which now finds itself in a severe energy crisis, while preserving and protecting its [Israel’s] local economy. … We have a real opportunity to export Israeli gas."

The arrival of the platform to the Karish gas field, the northernmost gas reservoir in Israel’s territorial waters, rekindled an old debate between Israel and Lebanon over the two countries’ maritime boundary. Or more precisely, about the right to explore maritime zones for economic profits. Israeli authorities claim that the specific location of the platform is not in the disputed area, but this does not hinder diplomatic tensions from simmering.

The remarkable success of Israel’s natural gas development program, and the relatively low costs of energy as a result, brought considerable revenues to Israel and the companies involved in gas production. This has not escaped regional players. Still, because of the maritime boundary dispute, major international corporations are reluctant to get involved on the Lebanese side. That being said, Jerusalem estimates that the growing demand for natural gas in Europe as a result of the war in Ukraine on the one hand, Lebanon’s dire economic crisis on the other, could push Beirut into resuming talks to resolve the dispute.

As a reminder, Israel marks its maritime border with Lebanon with a line stretching out of the last coast land border point at a simple 90-degree angle. Lebanon prefers to map the border as a direct continuation of the land border. The disputed area constitutes a triangular-shaped region of about 850 square kilometers (328 square miles).

Unprecedented negotiations between the two countries began in October 2020. But then, the Lebanese submitted a new boundary line, much farther south than the original line they had submitted to the United Nations. The new Lebanese line reaches into Israel’s economic waters, including the northerly part of the Karish reservoir, though it does not include the area of the platform or drilling, the rights to which are held by Energean.

The October 2020 talks got off to a bumpy start. Then, at the start of 2021, US President Joe Biden’s adviser, Amos Hochstein, was appointed to mediate talks. Hochstein had served as a consultant to American energy companies before being appointed to his position in the Biden administration. He offered the two parties a creative solution, and met with Lebanese President Michel Aoun and Prime Minister Najib Mikati several times to discuss it.

These talks ground to a halt in May 2021. The arrival of Energean's drilling platform to the Karish reservoir raised the issue yet again. A diplomatic source in Lebanon told Al-Monitor that in a roundabout way, this provided Aoun and Mikati with an opportunity to renew the negotiations. In order to do this, however, they would need to appear determined when dealing with Israel. This could explain the harsh statements they released about the situation. Mikati said that Israel was “encroaching on Lebanon’s maritime wealth, and imposing a fait accompli in a disputed area,” calling this “extremely dangerous.” Hezbollah Secretary-General Hassan Nasrallah threatened to strike the rig.

Israel did not wait for these threats. A joint statement by Elharrar, Defense Minister Benny Gantz and Foreign Minister Yair Lapid read, “The State of Israel prioritizes the protection of its strategic assets, and is prepared to defend them and the security of its infrastructure, all in accordance with its rights. At the same time, we call on the State of Lebanon to accelerate negotiations on the maritime border. Locating gas-based energy sources can greatly assist Lebanon’s economy and its citizens, and it is in the interest of the State of Lebanon to advance the dialogue on this matter. We hope that this will occur."

Rigas told Al-Monitor that the joint statement by the three ministers says it all. “This [the diplomatic dispute] is not an issue for Energean. It is a matter for the governments. We have full confidence in the government of Israel and trust that it will defend its strategic assets and national security. Anyone who invests here is fully aware that their investment will be protected by the Israeli government. I myself will fly out to the Karish platform and spend the night there. I feel very safe about it,” he said.

For Energean and for Israel, stakes are huge. On May 9, Energean revealed that it made another gas discovery in Israeli waters, within the Athena exploration well, which is the fifth successful exploration of Energean in Israeli waters abd located some 20 kilometers (12 miles) from Karish. Israel's natural gas revenues hit a record of $380 million in 2021.

Hochstein will be arriving in Beirut this week for talks with Aoun and Mikati about ways to resolve the dispute. According to American and Israeli sources involved in the matter, Hochstein made his arrival incumbent on Lebanon retreating from the most extreme position it adopted in its negotiations with Israel (known as Line 29).

Discussions will center on the original line that Lebanon originally submitted to the UN, known as Line 23, and the line that Israel submitted, known as Line 1. “Without this commitment from Lebanon, Hochstein would not be arriving in Beirut,” an Israeli diplomatic source told Al-Monitor on condition of anonymity. According to the Lebanese source, the more aggressive statements by Aoun and Mikati upon the arrival of the Energean platform to the Karish reservoir were intended to signal a tough stance, after giving up on the more extreme position in the negotiations.

Israel says that it is willing and ready to reach a solution, including even the fair division of gas reservoirs lying on the border with Lebanon. The general assumption in Israel is that Aoun and Mikati’s readiness to advance a solution could result in a renewal of negotiations, particularly if Hochstein offers a proposal that is especially appealing.