By intercepting Iran-made UAVs sent by Hezbollah earlier this week, Israel has made it clear that it can protect its maritime assets. 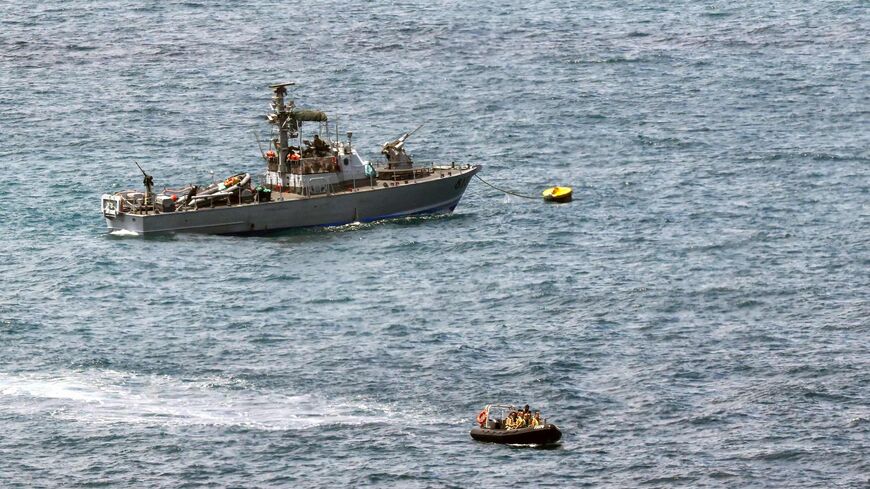 An Israeli navy vessel is pictured off the coast of Rosh Hanikra, an area at the border between Israel and Lebanon, on July 3, 2022. - JACK GUEZ/AFP via Getty Images

Prime Minister Yair Lapid met today in Paris with French President Emmanuel Macron. One of the main topics of their conversation was the escalation between Israel and Hezbollah. Before embarking for France, Lapid said, “There have been repeated attacks on Israeli gas rigs. Israel will not tolerate these attacks. Anyone who does this is taking an unnecessary risk.” He then called on the Lebanese government to “rein in Hezbollah from these attacks, or else we will need to do it.”

This past Saturday, Hezbollah launched three unmanned aircrafts toward the Karish gas rig in the heart of the Mediterranean Sea. The IDF discovered the small aircraft in flight and shot them down by means of a fighter jet and a navy artillery ship. The interceptions occurred at various distances from the Karish rig, and at least one of the aircraft came within a few miles of it.

The Karish natural gas rig was placed in the Mediterranean Sea just a few weeks ago, south of the maritime border between Israel and Lebanon. It is not yet active. Though there is no dispute between Israel and Lebanon over the Karish rig's location, some elements in Lebanon have claimed that Israel violated Lebanon’s economic zone and Secretary General of Hezbollah Hassan Nasrallah threatened Israel following the rig’s placement.

Shortly after the interception, the IDF shared the news that Hezbollah had launched them, estimating that Hezbollah had not aimed to damage the rig but only to score publicity points by photographing the rig and publishing the photos, or had simply tried to send a threatening message to Israel. Since there were no secondary explosions during the interception, it is unlikely the drones had carried explosives.

The terrorist organization from Lebanon is in difficult straits right now amid the political and economic crisis facing the country. It’s no secret that Hezbollah is funded by Iran and to a certain extent is considered an Iranian presence in Lebanon. Nevertheless, the organization had not yet responded to the recent military actions taken against Iran and attributed by foreign reports to Israel.

Some in Israel believed that sending the drones toward the Karish rig is connected to Iranian pressure on Hezbollah to respond to Israel. But the widespread opinion in the Israeli security establishment is that the drones are the product of Hezbollah’s desire to disrupt the negotiations taking place between Israel and Lebanon, mediated by the United States, over the maritime border between the countries.

After a long period without contacts, the governments of Israel and Lebanon recently renewed negotiations over the demarcation of their maritime border with American mediation. Israel believes that Beirut's reluctance to settle the issue has greatly hurt Lebanon, delaying the search for gas in the northern reservoirs that are undisputedly in Lebanese territory.

In light of Lebanon’s current interest in negotiations, this week it was reported that the Lebanese leadership was furious at Hezbollah over the drones. On Monday, Lebanon’s temporary Prime Minister Najib Mikati and Foreign Minister Abdallah Bou Habib met to discuss the drones sent to “the disputed maritime territory,” in their words.

In a press release following the meeting, Bou Habib clarified that the move had nothing to do with the Lebanese government and noted, “Lebanon believes that any actions outside the state’s framework and diplomatic context while negotiations are taking place is unacceptable and exposes it to unnecessary risks.” He further noted that negotiations over the maritime border are in advanced stages.

The use of drones surprised no one, and it's clear that they are a problem that must be solved. Iran, as is known, has used unmanned aircraft to attack various assets in the Middle East, and as we recall, attacked oil sites in Saudi Arabia by means of unmanned aircraft via the Houthi rebels in Yemen last March.

The IDF air force and navy reportedly intercepted the drones.

The three drones, of three different types, flew at relatively low speeds and at a low altitude that impeded their discovery. The IDF systems dectected one when it appeared at a distance of several dozen miles from the rig, and it was intercepted by an F-16 from the Emek squadron stationed at the Ramat David air force base. The two others were discovered by navy radar and intercepted, for the first time in the world, by Barak 1 missiles, positioned by the navy ship Eilat, a Saar 5-type ship stationed near the rig.

After the incident, the IDF stated that a preliminary investigation had determined that the drones had not posed a real threat. It noted that the monitoring and warning systems had worked as designed and that “combatants on sea and air acted professionally in the defense mission with great success.”

The IDF can count not just operational success in this incident, but also a public relations win. It distributed photos of the three interceptions to the global press, sending a message that the IDF can defend Israeli economic assets at sea.

The incident is revealing. Judging by the statements of senior Israeli security officers, we can assume that if an all-out conflict ever breaks out in the region, Hezbollah would launch many more drones toward Israel. No one in the Israeli security establishment doubts that the real challenge from unmanned aircraft still lies ahead.