Israel assesses Nasrallah's next move amid escalation on northern border

Jerusalem is concerned that internal pressures in Lebanon on Hezbollah’s Secretary-General Hassan Nasrallah could be translated into more violence against Israel. 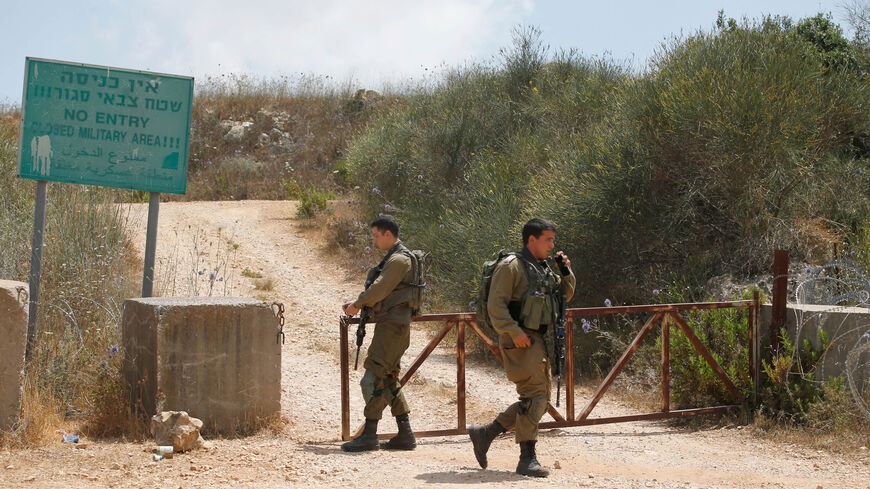 Israeli soldiers close a gate near the Kibbutz of Shtula, near the border with Lebanon, July 3, 2022. - Jalaa Marey/AFP via Getty Images

Since the surprise eruption of the 2006 Second Lebanon War, Israel has invested a major effort in trying to read Hezbollaz leader Hassan Nasrallah and understand the way he operates. “This is the most stable and responsible leader in the Middle East,” a top military intelligence official told Al-Monitor recently on condition of anonymity. “We should be praying for his well-being. He is calculated, credible, plays by the rules, sticks to his promises — and at the same time he is deterred. I wish we had others like him on other fronts.”

This assessment is now being challenged. On July 2, the Israel Defense Forces (IDF) announced the interception of three Hezbollah drones launched toward Israel’s Karish gas drilling platform in its Mediterranean economic waters. At least two were struck down by the navy’s Barak class interceptor system (a facsimile of the ground-based Iron Dome) deployed on its Eilat missile boat. Nasrallah did not appear overly concerned, but declared that if Lebanon’s economic water rights are undermined, he would go to war. He even set a deadline: September, just over a month away.

Israel is trying to understand his real intentions. “He has been a little unclear recently,” a senior Israeli security source told Al-Monitor on condition of anonymity. “It seems that he is losing his cool and credibility. He has embarrassed himself at least twice in recent weeks. Once, when he posted a video of the Karish gas rig that was aired on Israeli TV and claimed it showed footage from his drones, and again when he boasted of having brought down an Israeli UAV [unmanned aerial vehicle], a claim vehemently denied by the IDF. This is not the Nasrallah we know.”

Israeli assessments explain this shift as a diversionary tactic, with Nasrallah drawing attention to the supposed threat from Israel to deflect attention from his sensitive standing in domestic Lebanese politics, while accusing Israel and indirectly the United States for his country’s dire energy crisis.

“It is convenient for him to explain to Lebanese citizens that they are having to line up at the gas pumps because of Israel. It’s simply classic,” a senior Israeli diplomatic source told Al-Monitor on condition of anonymity. “He is trying to line up a win-win situation for himself. If negotiations between Israel and Lebanon [on demarcating their economic waters] yield positive results, he will take credit for himself and his threats against Israel; if the results are bad, he will escalate things and brand himself as Lebanon’s savior and the protector of Lebanon’s natural gas treasures.”

But Nasrallah is playing a dangerous game. “He does not want war,” an Israeli intelligence source told Al-Monitor on condition of anonymity. “But he could find himself in the midst of a war. He did not want war in 2006 and still found himself fighting one. He must understand the same thing could happen now.”

How should Israel respond if Nasrallah keeps sending drones toward the Karish rig? Israel’s top brass is divided on the answer, which depends first of all on the type of action he takes. Nasrallah has various options. He could launch another unarmed, intelligence collection drone of the type Israel intercepted, or an armed drone that would try to hit the platform. He could also deploy diverse or explosive-laden motor boats to strike the rig.

Israeli officials are in agreement that any attempt to hit the rig would be a clear violation of its red line, prompting a massive attack on Lebanon. The disagreement revolves around the question of what Israel should do if Nasrallah keeps up with more of the same, meaning unarmed drones.

Some in the military leadership think Israel should respond even to such a lower-level provocation. That decision will be left up to the politicians. Israel has a varied response menu and a huge target bank. It could hit Hezbollah targets in neighboring Syria, strike empty Hezbollah facilities on the Lebanon-Syria border, or remote and unimportant Hezbollah infrastructure, or even important but vacant infrastructure facilities. At the radical end of the spectrum, it could bomb one of Hezbollah’s rocket depots, an attack that would set off a war.

Israel knows it, Lebanon does, too. Neither side wants war of this type at the moment, but, as mentioned, no one wanted one in 2006, either.

Israel’s caretaker Prime Minister Yair Lapid is trying to portray himself as the “determined but responsible adult” on this front. This week, he overflew the Karish rig on a chopper and declared that gas discoveries in the Mediterranean could ease the global energy crisis and resolve Lebanon’s.

On the sidelines of the Biden visit to Israel on July 13-14, Lapid told Amos Hochstein, the US mediator in the Israel-Lebanon maritime border talks, that Israel would like to accelerate the pace of negotiations and reach an agreement with Lebanon as soon as possible.

Reportedly, Lapid wants to douse the flames on this volatile issue, but he knows that Nasrallah is in a bind. He cannot recognize any agreement with Israel, a move that would imply recognition of Israeli sovereignty. On the other hand, if an agreement benefits Lebanon, Nasrallah could stake a claim to its success and declare that he had made it happen. Lapid is interested in helping Nasrallah make up his mind as soon as possible.

Meanwhile, with interesting timing, the military censor lifted July 20 a gag order in place for two decades on the fact that Israel has been using UAVs to carry out targeted assassinations and military strikes. In 2012, for example, it used drones to kill Ahmed Jabari, the Hamas military wing’s second-in-command, in an attack that triggered a round of fighting between Israel and the Gaza Strip codenamed Operation Pillar of Defense.

Israel is a global pioneer in UAV development and the first to have used them for attacks, not just for intelligence and reconnaissance missions. In fact, Israel has been using various versions of these unmanned aircraft for over 20 years but has only now owned up to it in public.

What is behind the censor’s surprising decision? As far as we can tell, there was no political involvement and no particular reason. “Someone simply concluded that the use of the term 'an air force plane' — in announcing various attacks — was simply pathetic,” a former senior Israeli military source told Al-Monitor on condition of anonymity. “The whole world knows what Israel has developed, and our defense industries proudly display their top-of-the-line drones at numerous international fairs. Someone decided to stop playing games,” the source added.