IDF forces on alert as maritime agreement with Lebanon crumbles

Israel has rejected the changes Beirut has demanded to the draft maritime border agreement and now fears tensions could escalate on its northern border. 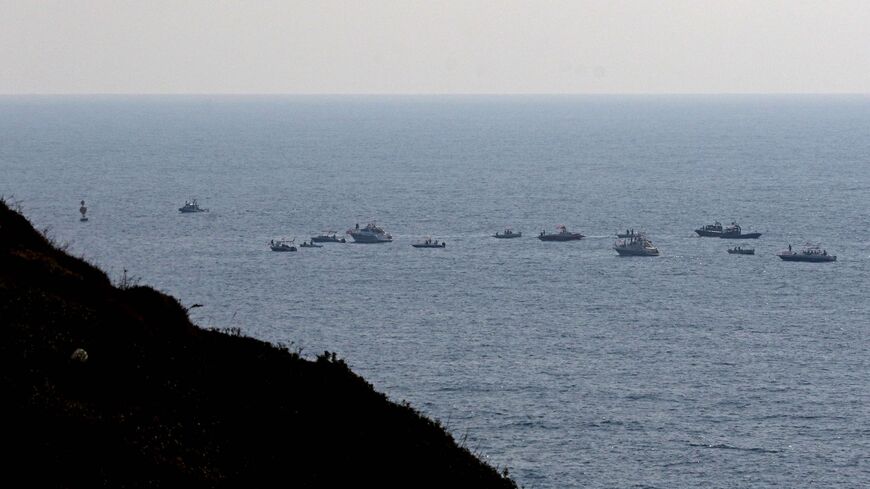 Lebanese protesters rally in support of Lebanon's right to its offshore gas wealth near a border buoy between Israel and Lebanon in the Mediterranean waters off the southern town of Naqoura on Sept. 4, 2022. - MAHMOUD ZAYYAT/AFP via Getty Images

Defense Minister Benny Gantz instructed the Israel Defense Forces to prepare for escalation on Israel's northern border after Prime Minister Yair Lapid dismissed the changes requested by the Lebanese government over the most recent draft of a bilateral maritime agreement. Israel’s security cabinet convened this afternoon to review the changes requested by Lebanon on Tuesday.

The Israeli security establishment fears that Hezbollah could attack the Karish rig and other Israeli targets. Gantz met this afternoon with IDF Chief of Staff Aviv Kochavi, Director-General of the Defense Ministry Amir Eshel and head of the Operations Directorate Shlomi Binder. Following the assessment meeting, Gantz instructed the defense establishment to prepare for increased tensions in the northern arena, "including defense and offense readiness."

The US-mediated agreement is designed to resolve the dispute over exploration for natural gas in the offshore area. The maritime zone includes the Israeli gas field Karish, which could become operational very soon, and the Lebanese Kana reservoir, which yet to be explored. The proposal involves Israel keeping Karish as well as a small part of the area where Kana is located, while most of the zone would be handed over to Lebanon. Israel would receive royalties for Lebanon using its part of the Kana area.

Last week, upon receiving the draft proposal from America mediator Amos Hochstein, Lapid and Gantz said they were willing to accept it. Lapid defended the document against opposition leader Benjamin Netanyahu, who accused him of caving to all of Lebanon's demands. The prime minister argued that the proposal protects Israel’s security and that it is in Israel’s interest for economically strapped Lebanon to benefit from the natural gas reserves.

"Prime Minister Yair Lapid was updated on the details of the substantial changes Lebanon is seeking to make in the agreement and instructed the negotiating team to reject them. Israel will not compromise on its security and economic interests, even if that means that there will be no agreement soon," said the official.

The official stressed that the proposal gives Israel full control of the Karish gas field and that Lapid has no intention of negotiating on that point. Israel holds that it has full sovereignty of the Karish area and does not consider it part of the talks. The official said Israel intends to extract gas from the Karish rig the moment it becomes possible.

Energean, which holds the exploration rights for the Karish field, announced this morning it has discovered 7-15 billion cubic meters of natural gas at the Hermes exploratory drilling site off Israel's coast.

Last June, the rig Energean intends to use to extract gas from the Karish field arrived from Singapore.

Yesh Atid member and head of the Knesset Foreign Affairs and Security Committee Ram Ben Barak told journalist Amir Bar Shalom today, "We do not determine our policy according to Hezbollah's threats. I am glad that we have reached a situation where there is a historic opportunity to reach an agreement with Lebanon. I hope that the Lebanese government will take [its requests] back. The Karish rig will start operating as soon as it is ready, regardless of the agreement."