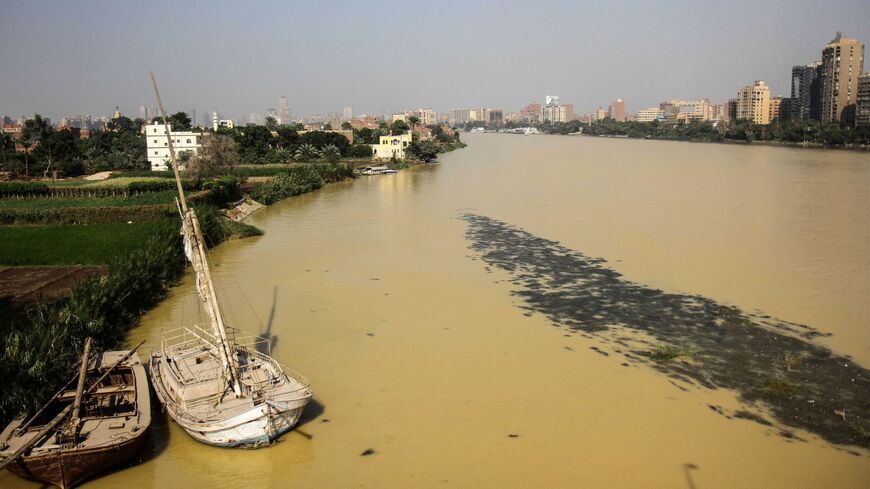 A picture taken on Oct. 31, 2016 in Cairo shows yellow-brown water in a section of the Nile River caused by excess silt from recent floods in the southern Egyptian provinces. - STRINGER/AFP via Getty Images

CAIRO — The Egyptian government is cracking down on illegal encroachments on the Nile River.

In a statement on July 9, Egypt’s Minister of Water Resources and Irrigation Mohamed Abdel Aty said that the government is taking immediate action to preserve its waterways and is referring violators to military prosecution.

Abdel Aty urged his departments to look for any form of encroachment on the Nile River, canals and drains. “The most serious of these encroachments consist of backfilling,” he said, which could block the water flow.

According to statistics published by the Ministry of Water Resources and Irrigation on July 10, out of around 177,000 cases of encroachment on the Nile, about 60,000 have been removed, including residential constructions, backfilling and pollution, whether due to sewage water or fish cages.

Egypt depends on the Nile River to meet 97% of its water needs, which amount to about 114 billion cubic meters annually. Meanwhile, the country’s water resources do not exceed 60 billion cubic meters annually, according to statements by Abdel Aty in mid-December 2021. The gap is filled by reusing water, importing agricultural crops to compensate for the water shortage, and updating the canal and irrigation system.

Meanwhile, Ethiopia is gearing up for the third filling of its controversial Grand Ethiopian Renaissance Dam (GERD) reservoir, amid the faltering tripartite negotiations between Egypt, Sudan and Ethiopia.

Mohamed Nasr al-Din Allam, former Egyptian minister of water resources and irrigation, told Al-Monitor, “In the past decades, the ministry would annually remove between 20,000 and 30,000 violations. But the increase in those violations in recent years forced the ministry to double down on its efforts.”

Allam explained that violations include illegal construction, illegal dumping of silt and soil, and illegal water use, whether industrial or agricultural. "Moreover, lands extending over 1,000 acres are being cultivated in areas not designated for agriculture, and these consume a lot of water,” he said.

Abbas Sharaki, a professor of geology and water resources at Cairo University, agrees with Allam. Speaking to Al-Monitor, he said, “There are many encroachments on the Nile, such as projects on the Nile River premises or farming on the shores of the river without a permit, not to mention the houseboats that were built on the Nile with permits.”

In late June, the Ministry of Water Resources and Irrigation launched an extensive campaign to remove Nile houseboats for violating legal procedures. The move stirred anger among residents who were forced to vacate their homes.

The government campaigns "aim mainly to preserve water resources, following a surge in violations and encroachments," Sharaki pointed out.

He added, “The Law of Water Resources and Irrigation was amended to emphasize the protection of the Nile River and to impose more severe penalties for violations of any kind.”

Last October, Egyptian President Abdel Fattah al-Sisi ratified the Water Resources and Irrigation Law No. 147 of 2021, which aims to protect water resources, the Nile River and the network of waterways from all forms of encroachment, and prevent the waste of irrigation water.

“Tightening these penalties is a good thing,” Sharaki said, but he criticized using military tribunals, “because this means that the civil law is not sufficient. Some of these violators could face injustice. The penal articles in the new irrigation law is a sufficient deterrent.”

Fouad Abdel Nabi, a professor of constitutional law at Menoufia University, told Al-Monitor, “No citizen should be transferred to a military court, because the Egyptian constitution stipulates that a citizen be tried before his natural (civil) judge.”

Abdul-Nabi continued, “There is no reason to refer any citizen who committed a violation to a military court. This is not an exceptional situation, and the state is currently in a state of stability since the president ended the state of emergency.”

In October 2021, Sisi lifted the state of emergency imposed in the country for years, declaring Egypt “an oasis of security and stability.”

However, Allam, the former water official, believes that resorting to military prosecution is an appropriate deterrent.