Egypt threatens to send military to remove encroachments along Nile

Egyptian President Abdel Fattah al-Sisi threatened to resort to the army to confront and remove illegal encroachments on the Nile, in addition to depriving the aggressor of government support provided to citizens, in tandem with mounting fears by the Egyptian government that its share of the Nile water will be prejudiced by the escalating Grand Ethiopian Renaissance Dam crisis. 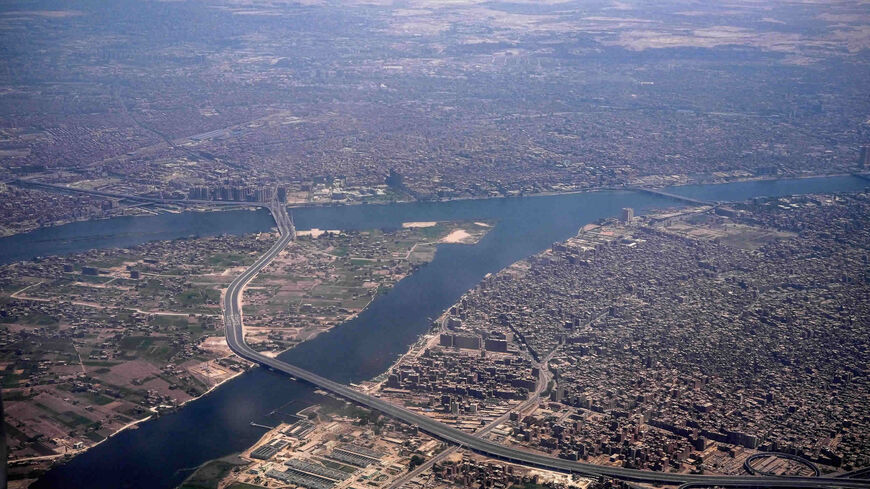 This picture shows an aerial view of the "Tahya Masr" (Long Live Egypt) overpass crossing the Nile River island of Warraq (L) on the northern outskirts of Cairo from the district of Rod al-Farag in Cairo (top) into the district of Imbaba in Cairo's twin city of Giza (bottom) to connect with the ring-road highway circling greater Cairo, Egypt, May 14, 2021. - Amir Makar/AFP via Getty Images

The Egyptian government is sparing no efforts to protect and preserve its share in the Nile River and to confront any phenomena that negatively affect it. In this context, Egyptian President Abdel Fattah al-Sisi threatened Sept. 27 to deploy the army to protect the Nile from any illegal encroachments.

During the inauguration of the Bahr al-Baqar water station in the Sinai Peninsula, Sisi warned the violations against the Nile River have reached an unprecedented stage. He denounced them as not befitting a country the size of Egypt.

Sisi threw a six-month ultimatum at the Ministry of the Interior to remove the violations on state lands and the Nile River, even if this requires army intervention.

He affirmed that he instructed the government to deny violators of state-owned irrigation facilities, canals, banks and the Nile River any subsidized food and services.

Sisi’s warning prompted Prime Minister Mustafa Madbouly to hold an urgent meeting Sept. 30 with the Board of Governors, in the presence of Minister of Water Resources and Irrigation Mohammed Abdel Aty to discuss the violations on the Nile River. Consequently, Abdel Aty decided to form a committee in each governorate, headed by the vice governor to follow up on the violations and clarify the appropriate mechanism for addressing them. The committees will also draw up a periodic report on these violations and their removal.

Also on Sept. 30, Abdel Aty held a meeting with the heads of the ministry to launch a large-scale campaign to remove violations on the Nile. The ministry is determined to firmly address all forms of encroachments in order to deter anyone who dares to infringe on the Nile River, he warned. This will lead to the desired goal of achieving “a Nile without encroachments,” he added.

On the same day, the Ministry of Irrigation and Water Resources announced that out of 120,000 violations, 64,000 were removed, including 18,000 referred to the military prosecution. The remainder will be removed within the next six months, the ministry affirmed.

On Sept. 27, ministry spokesman Mohamed Ghanem said that the most widespread form of violation is the illegal construction on the banks of the Nile.

He confirmed that huge efforts will be exerted in the coming period to remove the violations, which will be monitored effectively through satellites. The watercourse is compared to what it was 10 years ago, and this makes it easier to determine who committed the violations, he noted.

In January 2015, the Ministry of Irrigation and Water Resources launched a national campaign to protect the Nile from violations. It created the “Nile Guards” committee.

On April 23, 2015, Sisi inked the "Nile Document" to protect the Nile River. The document provided, inter alia, for raising awareness of citizens about protecting the Nile and refraining from building on its banks and polluting it.

Moreover, the ministry resorted to religious institutions to persuade citizens that religions prohibit encroaching on the Nile. On Aug. 26, 2015, the patriarch of the Orthodox Church, Pope Tawadros II, signed the Nile Document. The minister of irrigation at the time — Hossam Maghazi — confirmed that the pope’s signature contributes to strengthening the role of Islamic and Christian religious institutions in confronting the phenomenon of encroachments on the Nile.

Al-Azhar Sheikh Ahmed el-Tayeb signed the document in February 2015. “Islam forbids transgression of the Nile,” he said. He further noted that Al-Azhar launched a campaign to educate citizens about the importance of the Nile River.

In March 2021, the Egyptian parliament approved the amendments to the Water Resources and Irrigation Law made by the government. These amendments criminalized illegal encroachment, construction and obstruction of water flow in the Nile River. The penalty for violators is up to a one-year imprisonment sentence.

In his recent statement, Abdel Aty said, "The new irrigation law aims to protect the course of the Nile River, its bridges, water resources and the waterways network.”

Abbas Sharaki, professor of geology and water resources at Cairo University, said that the encroachments on the Nile negatively affect the Nile's water share. This is why the state threatened to use the army to confront the aggressors, he said.

Sharaki told Al-Monitor, "The Egyptian president's warning is a message to the government that it must remove any violations on the Nile, whatever the attribute or function of the violators. State and public figures have built on the Nile banks.”

He pointed out that violations on the Nile River were exacerbated amid the lawlessness and chaos that swept the country after the January 25, 2011, protests.

The Nile River Protection Sector affiliated with the Ministry of Irrigation and Water Resources had pointed in an official report in 2012 to a total of 16,000 violations on the Nile (the Damietta and Rashid distributaries) in the period from the outbreak of the January 25 demonstrations until 2012.

Sharaki explained that the illegal encroachments on the Nile, especially construction and backfilling, affect the speed of water flow of the Nile and reduce its area, which affects the ecosystem and wastes the river's water.

“There are other violations on the Nile such as building factories on the banks and discharging waste into the river's water that lead to its pollution and endangers fisheries,” he noted.

Sharaki concluded, "The state is determined to confront all illegal encroachments on the Nile in order to preserve its water share. All the more so as it is engaged in a fierce battle with Ethiopia to preserve that share.”