The deal came during UAE President Sheikh Mohammed bin Zayed Al Nahyan’s visit to France, where he strengthened energy relations with the European country. The two countries have grown closer over Libya and energy exploration in the Eastern Mediterranean. 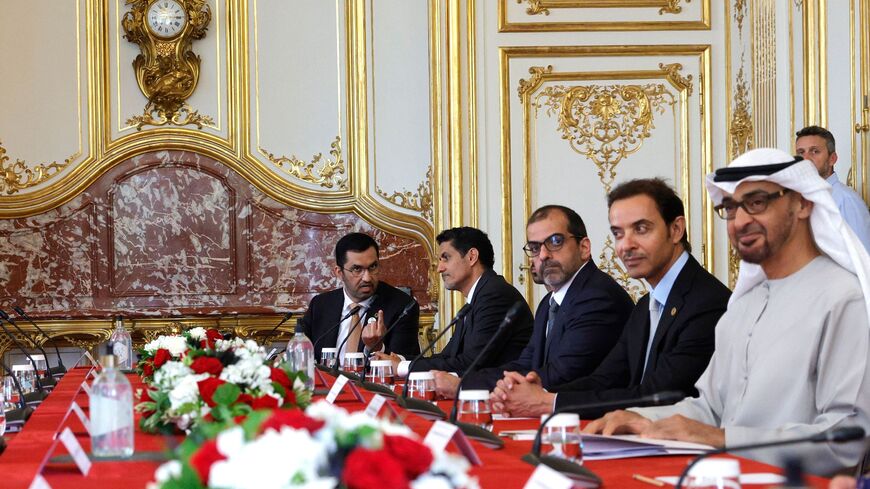 United Arab Emirates President Sheikh Mohamed bin Zayed al-Nahyan (R) looks on during a meeting with the French Prime Minister at the Hotel Matignon, the official residence of the Prime Minister, in Paris on July 19, 2022. Nahyan is in France for a three-day state visit. - GEOFFROY VAN DER HASSELT/AFP via Getty Images

ADNOC will work with TotalEnergies on carbon capture utilization and storage. They will also collaborate on gas growth, product supply and trade, ADNOC said in a press release.

ADNOC is owned by the emirate of Abu Dhabi.

What is carbon capture? Carbon capture refers to the physical trapping and separation of carbon dioxide. It regularly occurs at carbon’s emission sources such as at factories, power plants or gas facilities. Carbon dioxide can also be removed from the atmosphere, according to the British Geological Survey.

The captured carbon can then be transported via pipeline or modes of transportation such as trucks or trains. Carbon can be stored permanently underground or used again as a resource, according to the European Commission.

The UAE and France also signed the Comprehensive Strategic Energy Partnership yesterday, which focuses on energy security and action on climate change, the UAE Ministry of Foreign Affairs said in a statement.

Nahyan and Macron were present for the signing of the deal between ADNOC and Total.

The Emirates and France have aligned on some regional issues in recent years. In 2020, both countries joined an alliance to oppose Turkey’s energy exploration activities in parts of the Mediterranean claimed by Greece. The UAE and France also both supported the Libyan National Army in the Libyan civil war, which ended in 2020.

Know more: Entities in the UAE are investing more in green technologies. In April, Dubai’s AMEA Power was awarded rights to build solar power plants in Morocco. In May, ADNOC signed an agreement with British Petroleum to develop green hydrogen. The same month, the Emirati renewable energy firm Masdar unveiled a power plant that converts garbage into energy.

The UAE is a major oil producer and member of the Organization of the Petroleum Exporting Countries (OPEC).