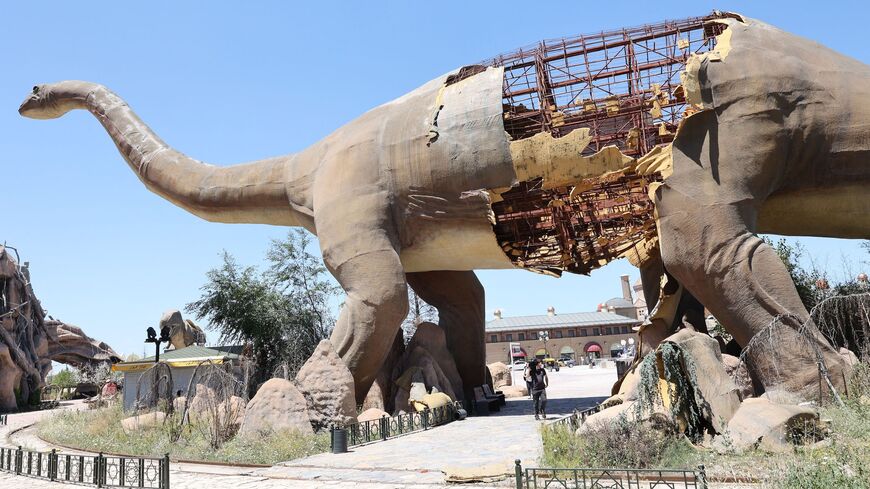 This picture shows abandoned toys and material in the Wonderland Eurasia theme park near the Turkish capital, Ankara, on July 21, 2022, during a press visit to mark its transfer to Ankara Metropolitan Municipality. - ADEM ALTAN/AFP via Getty Images

ISTANBUL — Once hailed as Europe’s biggest theme park, Turkey’s Ankapark is now a landscape of decaying fiberglass dinosaurs and scattered debris left by thieves and vandals — as well as the subject of ongoing claims of mismanagement and corruption.

The park, located in northern Ankara on land bequeathed by Turkey’s founder, Mustafa Kemal Ataturk, recently passed into the hands of the city’s current municipal administration after remaining open for less than eight months.

Since plans for the amusement park were announced by then Justice and Development Party (AKP) Mayor Melih Gokcek in 2013, the scheme has been buffeted by legal problems and political scandal.

It was officially opened as Wonderland Eurasia by President Recep Tayyip Erdogan in March 2019 just a few days before nationwide local elections as “[not] just a symbol of pride for Ankara, but all of Turkey.”

The 1.3-million-square-meter site was to host some 2,100 attractions, including 14 roller coasters, and was expected to attract 5 million visitors in its first operational year. Instead, it attracted lawsuits.

The former mayor oversaw the capital’s administration from 1994 to 2017, when he stood down under pressure from Erdogan. His term was characterized by accusations of corruption, election fraud and outlandish conspiracy theories promoted by Gokcek himself, such as the claim that “foreign powers” targeted Turkey by generating earthquakes.

Ankapark, which Yavas has said cost $801 million to build, is under investigation amid allegations that it was used to funnel public money into companies with close ties to the AKP.

Yavas has filed a number of criminal complaints against Gokcek for negligence and abuse of office.

Since Ankapark’s official closure in early 2020, the municipality has been fighting through the courts to have the site returned to its control, taking possession last week. Local people are now being canvassed on the future of the site, and hundreds visited the dilapidated site over the weekend.

“It’s in a truly disgraceful state when you consider the money spent,” Ahmet Aslan told the Sozcu newspaper. “An unbelievable theft. In my opinion, this is a project made to transfer money to friends and acquaintances.”

Yavas on Tuesday said he had filed another criminal complaint with the public prosecutor’s office against “those who caused the decay of Ankapark in this way.”

He added, “We will never allow the untainted money of the people of Ankara to be squandered. We stand by the promise we’ve made since before the elections. We will take whatever measures that can be used here, which could minimize the damage, and we plan to open it to the public free of charge.”

Gokcek, meanwhile, has insisted the problems at the park were down to those who came after his time in office, including Mustafa Tuna, the AKP mayor who succeeded him in 2017.

“I built it. I delivered it in working condition,” Gokcek said in an interview with TV100 on Monday night. “But an incompetent Mustafa Tuna and a visionless Mansur Yavas devastated the place.”

In recent years, allegations of the misuse of public funds have focused on public tenders for large-scale construction projects.

Critics argue that the government and AKP municipalities have granted highly favorable contracts to companies controlled by their supporters. These companies often include media wings that back the ruling party and minimize news coverage of the opposition.

Ankara and Istanbul, which also fell to the CHP in 2019, were long seen as important sources of resources to fuel such a patronage system.

After their victories, both Yavas and Istanbul Mayor Ekrem Imamoglu claimed a number of public works projects were outsourced to pro-government firms, resulting in unnecessary public expenditure.

“Ankapark is the concrete version of all the corruption and waste that has been carried out in Turkey to date,” Meral Aksener, leader of the opposition Iyi Party, said as she toured the site with Yavas July 24.

She added, “I never understood why there was such a curiosity about dinosaurs. We should not allow Ankapark to be forgotten so we can prevent similar things from happening again.”