Talk of assassination plans in Ankara ahead of Sunday election

Ankara Mayor Melih Gokcek says there will be assassination attempts in Ankara to stir the election. 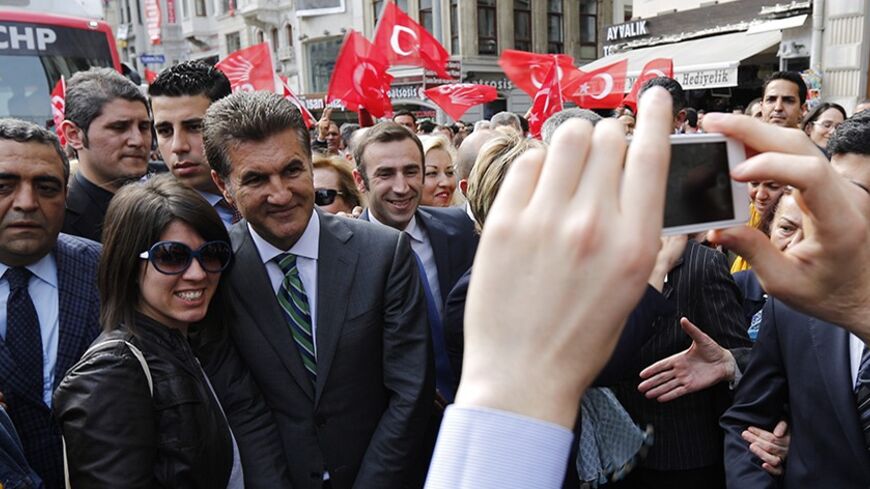 Main opposition Republican People's Party (CHP) mayoral candidate Mustafa Sarigul (3rd L) poses with a woman for a souvenir picture as he walks on the main Istiklal Street as part of his election campaign in Istanbul, March 27, 2014. - REUTERS/Murad Sezer

Turks will head to the polls on March 30 to elect their local governments. It will be the first time they vote since the Gezi Park protests of last year and the graft probe that surfaced more than four months ago, zooming in on the government’s wrongdoing.

While Turkish Prime Minister Recep Tayyip Erdogan denies any responsibility for these two serious developments that cost people blood and money, he certainly has turned this election into a confidence vote for his government. The tension on the streets is high, and people seriously worry about potential violence erupting on election day. Ankara, the capital of the country, seems to be carrying a high risk in that respect.

When Erdogan was first elected into office as the mayor of Istanbul two decades ago, I. Melih Gokcek took over the Ankara metropolitan city municipality. They were both members of the Islamist-based Welfare Party. One became the prime minister and the other is running for his fifth term.

Whatever the results on Sunday evening, one thing is clear: The government will remain in place until the next general election scheduled for summer 2015, and it is no longer possible to talk about a stable and manageable country with this political atmosphere. On top of this, if Mansur Yavas, the main opposition Republican People’s Party (CHP) candidate for Ankara mayor’s office wins, it is highly unlikely that it will be a peaceful handover of power from Gokcek. Put simply, election night could very well be the beginning of a new sort of escalation in Turkey.

This is not baseless speculation. Gokcek warned on March 25 — following up on the prime minister’s narrative — that “international powers” that are unable to digest their success will attempt assassinations. “I am warning the security details of CHP leader Kemal Kilicdaroglu, [Nationalist Movement Party] MHP leader Devlet Bahceli, CHP Ankara mayor candidate Mansur Yavas and CHP Istanbul mayoral candidate Mustafa Sarigul to pay utmost attention to any potential assassination attempt,” he said in a television interview.

Also Yavas alleged on the same day, “We are informed of about a hundred armed provocateurs who came to Ankara to stir chaos to this election.” Yavas also stressed that they informed the authorities about these tips, and called on the government to put law enforcement on alert to make sure that the people have a peaceful election day.

"I am in no position to take measures against assassinations. The best we can do is to protect ourselves and trust God. But if this [intelligence] is true, it is the duty of the ruling party to take the necessary measures. They will be responsible for even a single drop of blood that is shed," he said.

There have been a number of incidents in the run-up to the election that targeted Yavas’ team and followers. Yavas is speaking confidently that it is Gokcek who is behind all these incidents.

There are about 5 million people in Ankara, mostly with middle-class income. It has been a fact of life that Gokcek has remained in office partly because of the Islamist camp’s practice of distributing foodstuffs and extending social aid to preserve people’s support. It’s not clear whether the opposition in general has proposed alternatives to the people if they decide to vote Gokcek out.

In sum, people care more about their economic well-being than their freedoms or democracy. And that makes predicting the outcome of the upcoming election a big puzzle. In any case, people will speak out this weekend, and either way the outcome will not settle any score regarding the country’s turmoil over clean governance.