The favored candidate to become mayor of Ankara has been charged with professional misconduct as a lawyer, but it seems the attempt to discredit him hasn't worked as planned. 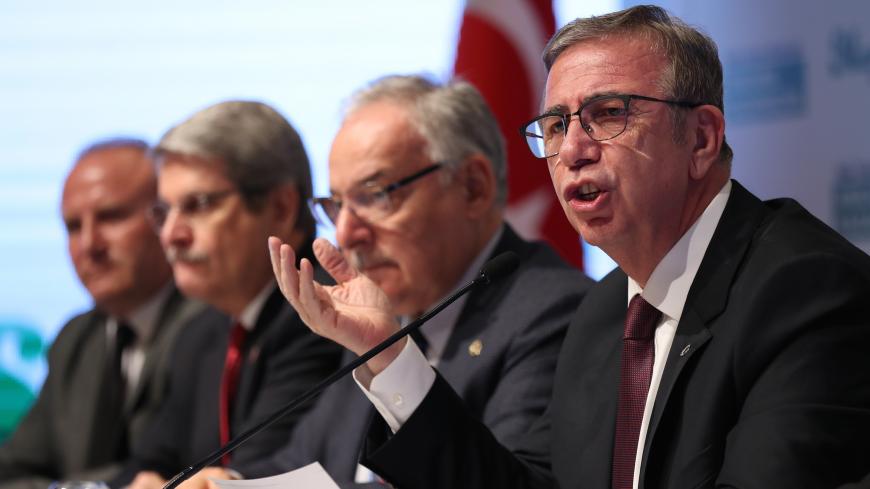 ANKARA, Turkey — The electoral race for mayor of Turkey’s capital took a surprising turn today, when an attempt to discredit the leading opposition candidate, and presumed front-runner, appeared to collapse. A pro-government columnist published a withering evaluation of the personality at the center of the smear campaign.

The government has its back to the wall in the March 31 elections. Legions of voters are fed up with the soaring cost of food, 20% inflation and 12% unemployment. They are expected to vote against the Justice and Development Party (AKP) of President Recep Tayyip Erdogan, which has held Ankara city hall for the past 25 years.

The favored candidate is Mansur Yavas. A former mayor of a town on the outskirts of the city, Yavas is backed by the leading opposition party, the Republican People’s Party (CHP), and the Good Party (Iyi).

Pollsters are not giving figures but they say that Yavas is ahead. On Monday, he told the Hurriyet newspaper group that he was “eight to 11 points ahead."

“I have met scores of people who said they will vote for me this time although they had voted for the AKP five years ago. I sense that the main motive behind this change in electoral behavior is the economy,” Yavas said.

But, also on Monday, prosecutors charged him with professional misconduct as a lawyer. The case arose from a long-running case between Yavas and a businessman, Necmettin Kesgin, who last October was convicted of forging a promissory note given to Yavas, as well as blackmailing Yavas and violating his privacy.

AKP spokesman Omer Celik trumpeted the filing of the indictment against Yavas, telling reporters it showed that the opposition candidate for Ankara mayor was not to be trusted.

In a long, rambling sentence, Celik bundled together the charges against Kesgin in the promissory note case and the indictment against Yavas, making it difficult to discern who was accused of what.

“Legal proceedings for forging documents, blackmail and profiting from blackmail and, worst of all, building an organization within the judiciary and using his personal relations and influence for profit, are going on. These are the accusations against Mansur Yavas,” Celik said in his daily press conference.

The next day Yavas called a press conference to reply. “Those who understood they cannot win in a democratic election are trying to tarnish my reputation. This is the most disgraceful election campaign our political history has ever witnessed,” he said.

Referring to Kesgin, Yavas said: “This person has been convicted of forgery and blackmail. He took the money paid by my client and fled. When I wanted to cash the promissory note, it became clear that the signature was forged. I am the victim. It is a dirty claim to declare that the victim is the guilty party.”

Yavas said he would sue Celik as well as the AKP’s candidate for mayor of Ankara, Mehmet Ozhaseki, accusing his rival of being behind the smear campaign. He added that Kesgin is currently on trial for child abuse.

An impressive bid to separate the wheat from the chaff came from an unlikely source today. Abdulkadir Selvi, well known as a staunch supporter of Erdogan, devoted his column in Hurriyet to the dispute.

Selvi wrote he had attended Yavas’ press conference, and he faulted the candidate for taking no questions at the end of his prepared statement. But then he turned to Kesgin, saying he had watched a TV interview with Kesgin, had looked into his court cases as well as his university entrance exams.

Selvi had found that Kesgin complained to prosecutors about Yavas in 2017, but his case was only taken seriously in the past few days. “How will the public evaluate a petition filed in 2017 and turned into an indictment only 18 days before the elections,” Selvi wondered. “Will the public’s trust in Yavas be shaken?”

Selvi answered his own question. He went on to write that Kesgin has been sentenced to over six years in prison for forging a promissory note, blackmail and violating Yavas’ privacy. Kesgin has also been convicted of forging his university entrance qualifications, which resulted in the cancellation of his law degree as well as a sentence of nearly two years. And if the appeals court upholds the promissory note conviction, Kesgin will probably serve both sentences in jail.

Selvi ended his column by recalling that recently a law student murdered his lecturer after she caught him cheating. “If he had graduated while cheating, and if Kesgin had not been caught forging his entrance exam results, they were going to be working among us as men of law.”

Hurriyet is the second-biggest selling newspaper in Turkey, with a daily circulation of 281,000 and a website that is widely read. The column seemed to have an immediate impact.

Hours later AKP spokesman Celik told the press he did not know Kesgin. “We are not taking sides between this person and Mansur Yavas,” he said in a remark that seemed to contradict his earlier comments on the dispute.

AKP candidate Ozhaseki told a TV channel he was “amazed” by Yavas’ criticism. “I don’t know the man whom he is accusing of serious crimes. It is Yavas who knows this guy,” he said.

The fact that both the ruling party candidate and official spokesman were today distancing themselves from Kesgin showed they recognized that if they wanted to blast a hole in Yavas’ campaign, they needed better ammunition.