US official speaks out against possible Turkish offensive in Syria

After Iraqi Kurdistan-backed Rojava Peshmerga are sent to the Turkish-Syrian border, Turkish officials inveigh against the action and what it represents. 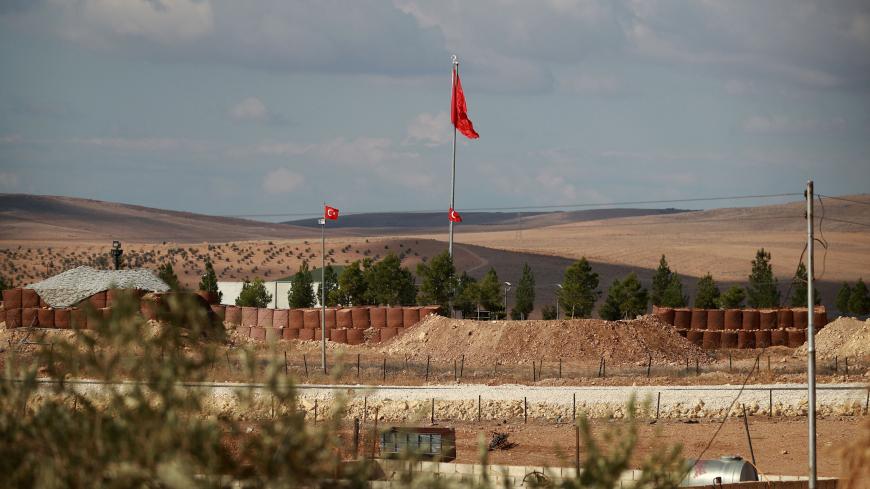 A general view shows Turkish flags fluttering at a military post in the village of Ashma in the Kurdish region of Kobani in northern Syria, Nov. 8, 2018. - DELIL SOULEIMAN/AFP/Getty Images

ANKARA, Turkey — Turkish TV channels gave prominence today to the US-backed deployment of Syrian Kurdish militia along the Turkish-Syrian border, saying it could obstruct Turkey’s plans to send its army into northeast Syria.

NTV and CNNTurk screened archive photos of the militia, the Rojava Peshmerga, firing mortar bombs and heavy machine-guns, and a long line of US armored cars driving along a dirt road.

“Seven to 10 thousand Rojava Peshmerga have been trained by the US in northern Iraq,” the pro-government journalist for Hurriyet newspaper, Abdulkadir Selvi, told CNNTurk. “These developments are being watched carefully in Ankara.”

The reports came a day after the US special envoy for Syria, James Jeffrey, spoke out against Turkey’s plan to invade northeast Syria to crush the People’s Protection Units (YPG). Turkish President Recep Tayyip Erdogan announced the plan Dec. 12, stressing his forces would not attack the roughly 2,000 US soldiers in Syria, but would “clear the east of the Euphrates from separatist terrorists.”

Speaking at an Atlantic Council seminar Monday in Washington, Jeffrey said, “We think that any offensive into northeast Syria by anyone is a bad idea.”

President Donald Trump spoke with Erdogan about Syria on Friday. The details of the call have not been released, but Jeffrey said US opposition to an incursion is something that “everybody from the president on down has conveyed” to Ankara.

The Rojava Peshmerga and the YPG belong to separate political groups. While the YPG is the military wing of the Democratic Union Party (PYD), which currently dominates northeast Syria, the Rojava Peshmerga are aligned with the Kurdish National Council, a Syrian entity backed by the Kurdistan Democratic Party of the Barzani clan in northwest Iraq. The Kurdish National Council, which has been supported by Turkey, is an archrival of the PYD.

The TV channels said the deployment of Rojava Peshmerga along Turkey’s border with northeast Syria would act as a “buffer” between the Turkish army and the YPG. “It is argued that the United States is doing this to deter Turkey from entering northern Syria,” NTV presenter Oguz Haksever told viewers.

But the number of Rojava Peshmerga on the northern Syrian border is only 100, hardly enough to stop the Turkish army. However, they have gone there with the backing of the United States as well as their Syrian rivals, the Syrian Democratic Forces (SDF) — a US-armed militia comprised largely of YPG fighters.

Jeffrey said the Rojava Peshmerga deployment “was done with our understanding but also with the understanding of the SDF,” adding it was one of a number of steps that Washington was taking to reassure Turkey about security in northern Syria.

Turkey sounded anything but reassured Tuesday.

Making no distinction between the SDF and the YPG, Numan Kurtulmus, deputy chairman of the ruling Justice and Development Party (AKP), said the government sees the YPG as a threat just as Israel sees Iranian-backed Hezbollah as a threat on its Lebanese border.

“Jeffrey’s statement about the YPG is unacceptable,” said Kurtulmus. “The United States should ally itself with Turkey, not with the YPG.”

Defense Minister Hulusi Akar said the United States had not kept its promise to remove the YPG and its Turkish sister group, the Kurdistan Workers Party (PKK), from northern Syria. “This operation will not end until all these terrorists have been cleared away.”

And Foreign Minister Mevlut Cavusoglu said, “We’re obliged to destroy the terrorist organizations beyond our borders.”

Hurriyet journalist Selvi said that the Turkish army had lined up all the necessary troops and equipment along the Syrian border and that Turkey was “now waiting for the political order to start the operation.”

Erdogan’s critics have accused him of orchestrating an offensive into Syria to mobilize support before March 31 local elections. In Turkey, local elections tend to be a midterm test of the government’s popularity, and the poor state of the economy has caused Erdogan’s job-approval rating to fall to a point where he has more critics than supporters.

Today, the main opposition party, the Republican People’s Party (CHP), announced its candidates for mayor of Ankara and Istanbul. The decision followed weeks of negotiation with the smaller opposition party, Iyi, which has endorsed the two nominees.

For Ankara, the alliance’s choice is Mansur Yavas, who ran for the position in the 2014 municipal elections. Liberal Turks believe he was cheated of victory by fraud, but an appeal to the electoral board was dismissed. A notable feature of his previous campaign was a plan to construct a pedestrian green belt from one side of the city of 5 million people to the other.

“We have to win this election to crown the trust (you have shown in me),” Yavas said today in a tweet. “May the road be easy.”

The AKP, which controls both cities at the moment, will contest the elections in alliance with the far-right National Movement Party (MHP). The parties have chosen Mehmet Ozhaseki, a former mayor of the provincial city of Kayseri, to be their candidate for Ankara. Their candidate for Istanbul has not been announced, but it is expected to be Binali Yildirim, the former prime minister.