US, Iran still trying to close gap on nuclear deal

The Biden administration may be considering options for a Plan B if nuclear talks fail, but backchannel diplomacy is continuing. 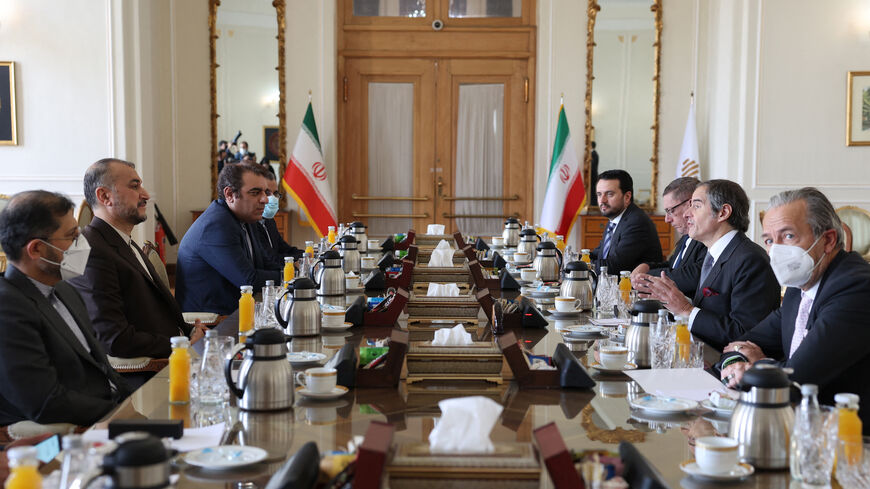 US officials and nonproliferation experts warn Iran needs only weeks to produce enough weapons-grade fuel to build a bomb, raising pressure on the Biden administration to secure a deal that would constrain the country’s nuclear ambitions.

The parties to the nuclear pact are expressing continued pessimism that a deal can be reached to revive the original agreement, known as the Joint Comprehensive Plan of Action (JCPOA). US envoy for the nuclear talks Rob Malley said last month that chances for a deal were “tenuous at best.”

But neither Washington nor Tehran has shut the door entirely on efforts to revive the Obama-era agreement, which placed limits on Iran’s nuclear capabilities in return for sanctions relief.

Iran is prepared to sign a "good deal if Washington fulfills its commitments," a spokesperson for the Iranian Foreign Ministry said Monday.

Earlier this month, Iranian Foreign Minister Hossein Amir-Abdollahian claimed that Iran had put forward a new proposal to salvage more than a year of talks between Iran and the five permanent members of the United Nations Security Council plus Germany.

US officials say the ball remains in Iran’s court. The State Department said last week that it hadn't received any "substantive communication" from the Iranians and was waiting for a "constructive" proposal.

Iran’s leaders must “decide very quickly if they wish to proceed with what has been negotiated and which could be completed quickly if Iran chose to do so," said Secretary of State Antony Blinken.

An Iranian official familiar with the talks, and who spoke to Al-Monitor on condition of anonymity, said of the stalemate, “The US and Iran indirectly have exchanged [dozens] of messages, but it’s very obvious that we are talking two different languages.”

Further dimming prospects for a deal, Tehran this month disconnected a number of surveillance cameras monitoring its nuclear activity after Western powers issued a formal rebuke of Iran for its failure to comply with international inspectors. The head of the UN’s nuclear watchdog, Rafael Grossi, said Iran’s actions had dealt a near “fatal blow” to the JCPOA’s future. An Arab diplomat described Iran’s recent moves as part of a “nuclear ambiguity policy.”

The European Union's coordinator for nuclear talks, Enrique Mora, is still working to save the deal. A Western source told Al-Monitor that during Mora’s visit to Oman earlier this month, he received an Iranian proposal. According to that source, the designation of the Islamic Revolutionary Guard Corps (IRGC) as a foreign terror organization (FTO) “was still a main issue on the Iranian side.”

The parties appeared to be on the verge of a deal in early March, but talks in Vienna broke down over Tehran’s demand that Washington remove the IRGC, a branch of the Iranian armed forces, from its formal list of terrorist organizations. The Biden administration has refused to take the IRGC off its terrorism blacklist unless Tehran comes to the table with concessions on non-nuclear issues.

Publicly, Iran has downplayed the IRGC issue as an impediment to the deal. Mohammad Marandi, an adviser to Iran’s nuclear-negotiating team, told Al-Monitor that delisting the paramilitary organization isn’t a condition for an agreement.

Marandi said there are still gaps in the talks regarding assurances and sanctions but dismissed the US rhetoric that the window for diplomacy is closing.

“The Iranian side was never intimidated by US deadlines. They knew the US was bluffing,” he said.

President Joe Biden campaigned on resurrecting the 2015 pact that former President Donald Trump tore up four years ago. But he’s made clear the administration won’t budge on the FTO designation to get the deal across the finish line, said Mark Fitzpatrick, a former State Department nonproliferation official.

“He doesn’t have the political leeway to do it,” Fitzpatrick said. “I think he’s going to continue to hold out and consider Plan B options, all of which are terrible.”

Both sides are under pressure from their respective capitals to throw in the towel. Republicans and some Democratic lawmakers, including Foreign Relations Committee Chairman Sen. Bob Menendez (D-N.J.), are pressing the administration to explain its backup plan if the talks collapse.

Sixteen members of the president's own party joined Republicans in voting for a symbolic Senate resolution this month that called for Biden to keep the IRGC blacklisted and ensure that any potential deal also addresses the “full range of Iran's destabilizing activities.”

“The government and the state see the talks as the best path to solve this problem,” the official said. “But there are also some political factions and personalities who think that we need to end this chapter and proceed with a new strategy based on what we have, not what we could get.

Recent anti-government protests have put additional pressure on Iran’s leaders to strike a deal to lift sanctions. Severe economic hardship, in particular the rising cost of food and fuel, sparked protests in early May that have spread to cities across Iran.

The latest unrest comes a year after the election of President Ebrahim Raisi, a former judge who during his campaign supported Iran's return to the multilateral deal, which would provide relief from American sanctions that have strangled Iran’s oil and banking sectors. Raisi succeeded former President Hassan Rouhani, a relative moderate whose government negotiated the 2015 agreement.

“Some of these folks in the government are very much afraid of striking a deal that will be cast objectively as less than what [Hassan] Rouhani essentially did get,” said Trita Parsi, executive vice president at the Quincy Institute for Responsible Statecraft. “This is causing them to be very cautious.”