Iran nuclear deal back in play after EU envoy's visit

Multiple sources in Iran say Mora left Tehran with 'more than suggestions' for a revival of the deal, while both sides may have moved on from differences. 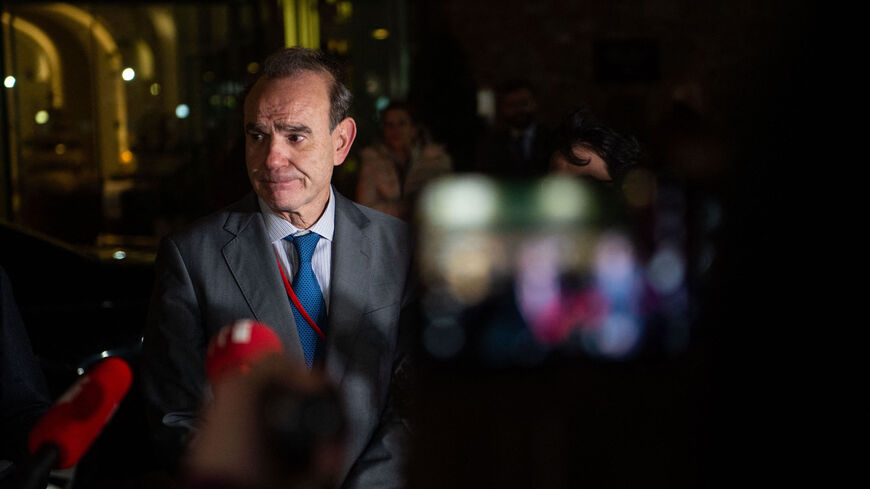 Deputy Secretary General of the European External Action Service (EEAS) Enrique Mora speaks to journalists in front of the Coburg palace after a meeting of the Joint Comprehensive Plan of Action (JCPOA) in Vienna, Austria on Nov. 29, 2021. - VLADIMIR SIMICEK/AFP via Getty Images

Giving Mora’s mission a further push was that his visit coincided with that of the Emir of Qatar, Sheikh Tamim Bin Hamad Al Thani, who was also part of the diplomatic effort to revive the deal. Mora was in Tehran from May 10-13, while the Qatari emir visited on May 12.

A foreign diplomat based in Tehran told Al-Monitor that the first day of Mora’s visit — including his meeting with Iran’s Deputy Foreign Minister Ali Bagheri Kani — wasn't encouraging. Yet "the second day things seem to have changed, and the Iranians handed Mora some suggestions," the diplomat added.

Al-Monitor learned from multiple sources in Tehran that what was presented to the EU official were more than suggestions. “The Iranian side handed Mora a proposal with revisited ideas,” an official source in Tehran told Al-Monitor.

According to the same source, “the Islamic Revolutionary Guard Corps (IRGC) issue isn't centric in the new proposal. It's there, but there are other issues with more priority.”

In recent months, attempts at reviving the agreement have stalled over an Iranian demand to have the IRGC removed from Washington's Foreign Terrorist Organization (FTO) list.

While there's no word over the new proposal, another source in Tehran stressed that there will be no resumption of talks without a clear response from the US.

“The Biden administration should decide, it can't stay in the middle between the policies of [former President Donald] Trump and what [President Joe] Biden repeated during his election campaign,” the official source stressed. “They master the art of over-simplifying complex issues, and taking things out of context, and this is creating more rifts over the nuclear agreement. It's really easy to return to the deal, but Biden’s administration wants to have the cake and eat it at the same time, which isn't possible.”

It's believed that the visit of the emir of Qatar to Tehran had a positive impact on Mora’s mission.

Sheikh Tamim expressed optimism that an agreement between the United States and Iran could be achieved, voicing readiness to help in the matter.

“We hope there will be an agreement between the parties to the nuclear agreement, and Qatar is ready to participate in resolving this conflict” the emir said during a May 20 news conference with German chancellor Olaf Scholz in Berlin.

A foreign diplomatic source in Tehran revealed that Qatar and Oman are helping to smooth the path to a nuclear deal, saying, “over the past few months, senior diplomats from Qatar and Oman paid unannounced visits to Tehran. The main objective remains creating the best circumstances for the revival of the nuclear talks."

Earlier this week, US Secretary of State Antony Blinken spoke with Qatari Foreign Minister Mohammed bin Abdulrahman Al Thani and thanked him for Doha's "constructive role in our efforts to resolve issues with Iran," according to a US readout of the call.

Iran's Foreign Minister Hossein Amir-Abdollahian said on Thursday that if the US acts “logically" then a deal is within reach. On Friday, the foreign minister spoke by phone with EU foreign policy chief Josep Borrell. According to an Iranian readout of the call, Borrell said, "We’re now on a new path of continuing talks and focusing on solutions … I’m hopeful for a good result." He reportedly added that the EU was "determined to continue efforts to close gaps between Iran and the United States.”

He told his Russian counterpart, Sergei Lavrov, that the other sides in the Vienna talks should put forward their initiatives to this end, adding that Tehran is willing to reach a “good,” “strong,” and “lasting” agreement while observing the Islamic Republic’s red lines.